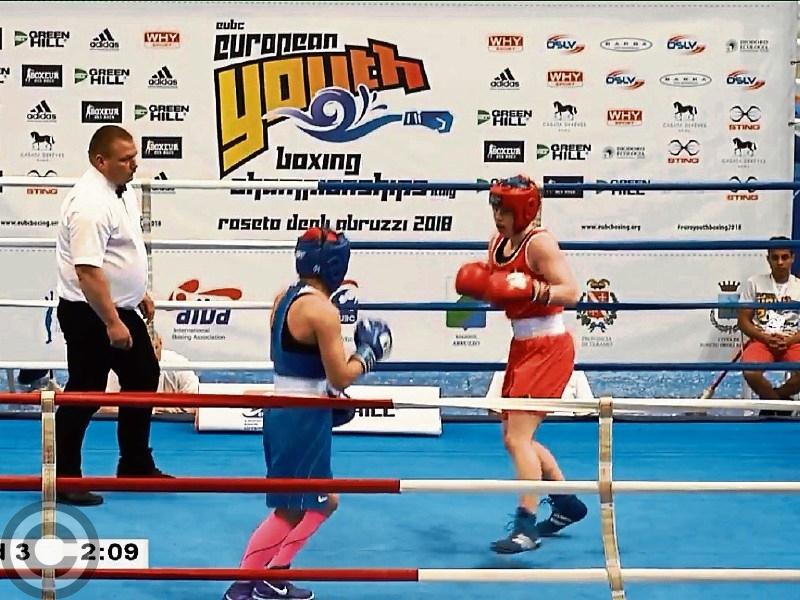 Déarbhla Rooney (right) on her way to defeating Russian opponent Valeria Radionova in Tuesday's European Youth Bantamweight semi-final in Italy. She faces Jessica Triebelova of Slovakia in the final

All of Manorhamilton and Leitrim will be glued to computer screens on Wednesday afternoon after local fighter Déarbhla Rooney sensationally fought her way to the European Youth Bantamweight Final in Italy.

The young Mullies woman beat the powerful Russian Valeria Radionova on a 3-2 split decision to book her place in today's final where she will face Slovakia's Jessica Triebelova in the battle for gold.

In a tough and bruising contest with the Russian, Déarbhla had to adopt slightly different tactics to her previous fights as Radinova was quite content to get involved in close quarter scraps.

Déarbhla led after the first round on four of the Judge's scorecards but a strong second round from the Russian saw her reverse the decision, winning the round 4-1. It meant it all came down to the final round and in an incredibly close battle, Déarbhla claimed victory with a 10-9 score from three of the judges, the Russian winning the other two 10-9.

Before she left for Italy, the Sean McDermott Boxing Club fighter spoke to the Leitrim Observer and talked of aiming for a medal but to be contesting the final must be even beyond her wildest dreams.

“I think if I go over there and I fight the way I can fight and just perform, don’t be nervous, I think I can hopefully progress and bring back a medal.”

Keep up to date with Déarbhla's progress in the final on www.leitrimobserver.ie and on Twitter @Leitrim Today.