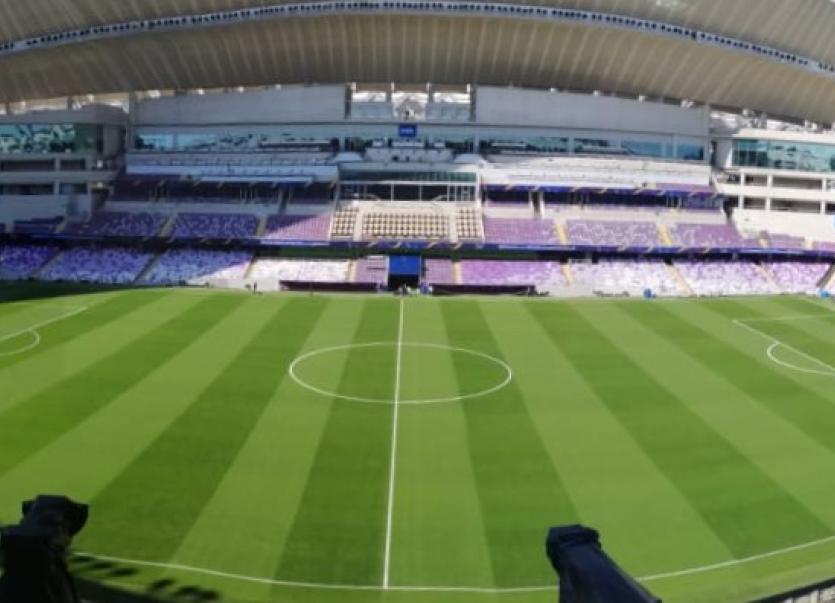 SIS Pitches, an internationally recognised leader in sports pitches, has been contracted as full-service provider for venues being used at this year’s Club World Cup, the football tournament currently taking place in the United Arab Emirates.

Just months after taking centre stage at the World Cup in Russia, the growing Irish company has constructed, installed and maintained pitches, and training pitches, for the landmark global club competition.

SIS Pitches was established in 2001 by Sligo businessman George Mullan and has offices in Ireland and the UAE, installed SISGrass at the Hazza bin Zayed Stadium, the venue for this year’s tournament opener between UAE host-club Al Ain and Team Wellington of New Zealand.

Both stadia feature the firm’s technologically-advanced hybrid pitch system SISGrass, which was used at six of the 12 World Cup venues in Russia earlier this year, including the final at the Luzhniki Stadium in Moscow.

As well as installing turf at Hazza bin Zayed Stadium, a pitch they installed back in 2013 when the stadium was built, SIS Pitches also re-turfed and stitched Zayed Sports City Stadium to mark 100 years since the birth of Sheikh Zayed, the Founding Father of the UAE.

A national celebration was held at the stadium earlier this month, when more than 22,000 spectators enjoyed a historic celebration.

In addition to installing pitches at both Club World Cup venues, a third surface was also provided by the firm at the new Maktoum bin Rashid Al Maktoum Stadium in Dubai ahead of the AFC Asian Cup next year, with all three grounds set to be completed in just 21 days.

The turf used at the Hazza bin Zayed Stadium came from a purpose-built farm, designed and built by SIS Pitches due to a lack of quality turf in the region, and to meet the needs of the Abu Dhabi Sports Council.

David Ball, Managing Director at SIS Pitches, who is based in the company’s Dubai office, said, "The fact that we have supplied pitches to the venues for the finals of both the Club World Cup and World Cup is a huge feather in our cap, and a ringing endorsement of the quality and advanced technology of our flagship system, SISGrass.

"Our team has done a wonderful job with the installation and we are excited to now see some fantastic football being played. It has been a brilliant year for football and we are pleased to have played such an important role."

Matt Jones, Head Groundsman at the Hazza bin Zayed Stadium added, "I really appreciate the support from SIS Pitches team. They did a first-class job on the turf and their work is always to the very highest standard. It has been a pleasure to work with the team at SIS Pitches and to watch them in action."