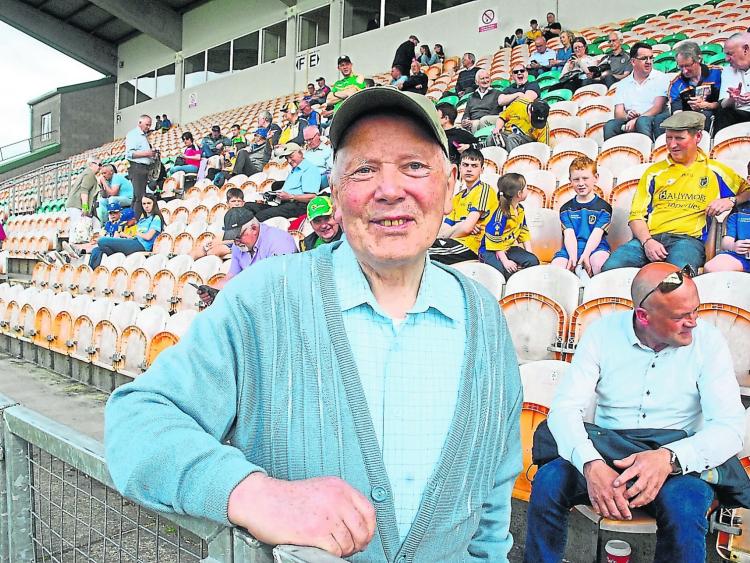 I worked all night, so you could see,
Just how much you mean to me,
I carved your name right next to mine,
And it'll be there till the end of time
Randy Travis – ‘Written in Stone’

You can take the man out of Leitrim, but you can never take Leitrim out of the man. Of this old maxim, Gerry Nangle was the epitome.

Over a lifetime’s service in the industry, Gerry became renowned as one of Dublin’s great publicans. But of those who enjoyed the hospitality that he and his beloved wife Kathleen (Kitty) offered, none were left wondering from whence he came.

Gerry, son of John and Margaret Nangle, left Cornaroy, Drumshanbo for Dublin in 1951. His plan was to work and save for his passage to New Zealand, but he missed Leitrim so much that he decided to stay in Dublin so he could be closer to his beloved county.

He served his apprenticeship with the Mooney Pub Group in Dublin and his dream was to run and own his own pub. In the late 50s he went into partnership in the Townsend Bar, Townsend Street, Dublin. By 1963 he had formed a winning partnership when he married Kathleen and they took over their own pub together, opening Gerry Nangle’s in Summerhill.

In 1968, they moved to Parkgate Street where they stayed for the next 20 years, making lifelong Dublin friends who called in regularly. It became a haven for many friends from the West who travelled up on match days to support their teams and would call into the pub on their way to and from Croke Park.

There were great days there when the Dublin teams of the 70s and 80s called in with Sam Maguire Cup. In 1988 they took over the Blanchardstown House where they stayed for another 20 years until his retirement.

Recently, Gerry found out that some of the original interior of Gerry Nangle’s Bar was salvaged when it was demolished in 1969 and it gave him great pleasure when he discovered that it is part of the interior of the RíRá Irish Pub in Georgetown, Washington, USA. His name and photo are hanging there, to let patrons know of its provenance.

It’s not the only place you will still find Gerry’s name. When he heard about the Leitrim Wall fundraising drive to complete the GAA Centre of Excellence in Annaduff, he immediately bought a brick. He modestly inscribed it: ‘Gerry Nangle, Drumshanbo. 40 years a publican in Dublin – great Leitrim supporter.’

Two weeks later, Eamonn Duignan, a good friend of the Nangles and chair of the Leitrim Wall Fundraising Committee, received a call from Kitty. She too was looking to buy a brick. Eamonn informed her Gerry had beaten her to it, but Kitty wanted one of her own. A proud Dub and fanatical Dublin supporter, she inscribed it: ‘Up the Dubs. Thanks to Leitrim for Gerry.’

The story doesn’t stop there. Another brick was bought online at www.leitrimwall.com with the inscription: ‘St Vincent’s GAA Club – ‘Supporting Gerry Nangle’. A little digging revealed the buyer to be Dermot O’Malley, from Marino in Dublin. When Dermot qualified as an accountant his first client over 50 years ago was Gerry Nangle. It proved the start of a lifelong friendship and Dermot wanted to acknowledge that having heard about the Leitrim Wall in a report by Eileen Magnier on RTE Radio 1 before the 2019 Division 4 league final in Croke Park.

Gerry was thrilled to see Leitrim on the up and was over the moon when they were promoted to Division 3. He always looked forward to meeting old and new friends at Leitrim matches. At the Leitrim v Warwickshire Lory Meagher Cup Final in 2017, the Nangles’ great family friend, Sean ‘Breffni’ Flynn, jokingly asked: ‘When did you travel up?!’

GAA was his passion and he attended many club matches in Dublin as well as inter-county games. He loved calling into the Bush Hotel to chat with Joe Dolan and other Leitrim supporters when home for a game. He had a huge respect for GAA players and loyal supporters alike.

A kind, quiet man who was always smiling, his great sense of humour and wit were loved by all who knew him. He loved the outdoors and was very active in his retirement, always on the go, up bright and early every morning, out for walks around the likes of the Hill of Howth or Bray Head.

“We called him Da, not because we were Dubs, but because he said he was in Dublin and he was a Da,” explained his daughter Caitriona.

“In Croke Park, he liked to get double letter seat rows as he always made sure to be sitting far enough back to have shelter in case it rained. He’d bring the nicest ham rolls, lettuce (none of that rocket salad nonsense), ham, tomato, scallion and salad cream.

“One particular match day last summer, the sun was splitting the trees so he didn’t bring a jacket, but as we were in the shade he got quite cold in between matches at the double header. I went to the shop and bought him a Dublin jacket to keep him warm. He reluctantly put it on and we were laughing, finally after 68 years he was a Dub. After the match when he was warm again, he handed me back the jacket and smiled and said: ‘Thank you, keep that for yourself.’”

“We only ever had him on loan in Dublin, his heart was always in lovely Leitrim!”