Padraig Griffin reflects back over 50 years to look back on Eddie Leddy's historic 1968 All-Ireland Schools double, one of the greatest feats of athleticism ever given by a Leitrim athlete

Saturday March 16, 1968 started out wet and windy as two cross country teams comprising eleven runners gathered at St Felim’s College in Ballinamore to begin what was to be a historic journey to Dublin for the All Ireland Schools Championships that afternoon.

The weather forecast was for rain to clear from the west to be replaced by cold blustery showers. The national newspapers that morning led with a financial story relating to the International price of gold, a continuation of the problem which had led to a devaluation of sterling and the Irish pound the previous November.

They also told of the appointment of Thomas Hardiman as new Director General for RTE and gave the results of the Clare and Wicklow by elections which brought Sylvester Barrett (FF) and Godfrey Timmons (FG) into Dail Eireann.

The Leitrim Observer of that date which was in the shops two days earlier led with a detailed report on a Commemorative Mass celebrated by parish priest Canon Patrick McNiffe in Ballinamore the previous Monday to mark the 47th anniversary of the death six men in the Selton Hill ambush and also reported on the sudden death the previous Sunday of Donagh O'Malley the Minister for Education who had pioneered the free second level education which had begun in schools such as St Felim’s the previous September.

That same September the school, which opened on the site of the former railway station, had, along with the Vocational School and the all girls Mean Scoil Fatima, joined a unique educational experiment called Common Enrolment by which staff and students were pooled for teaching purposes, creating in effect a modern community school model.

Under the heading “Big Breakthrough for Ballinamore Athletes”. the newspaper reported on the Connacht Schools Cross Country Championships held in Tuam Racecourse the previous Wednesday where St Felim’s College had an outstanding evening with Eddie Leddy setting a unique record in winning both the Senior and Intermediate titles with the school’s Intermediate team also winning and the Junior team taking second to St Mary’s Boyle. Ballinamore’s Noel Maxwell was runner up in the Junior race while Michael McTague was in a similar position in the Intermediate event. 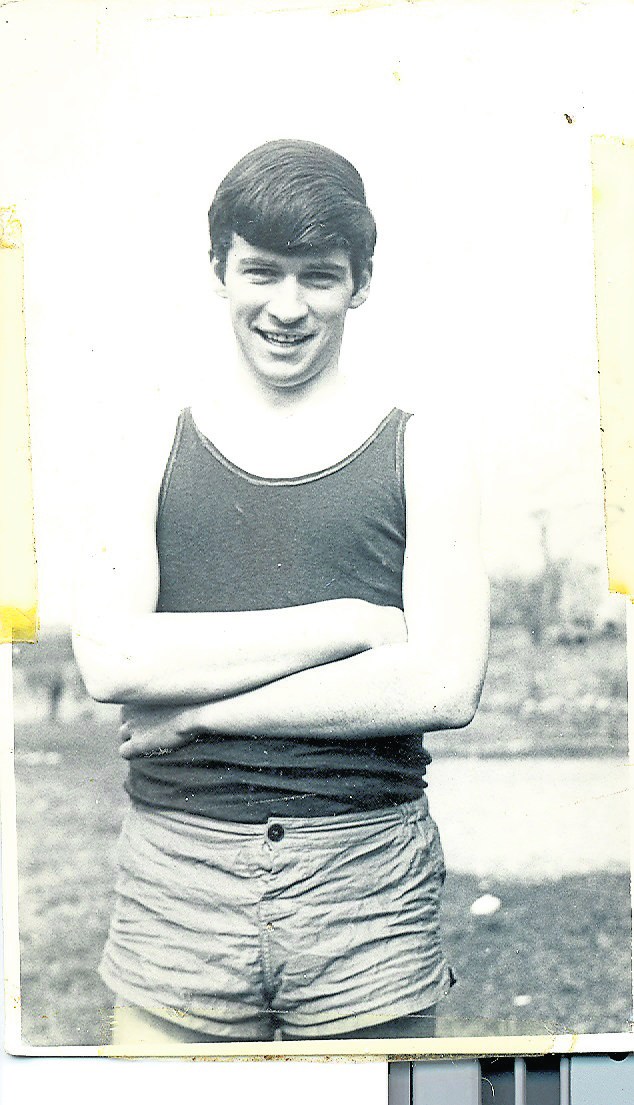 Connacht had a leading role in pioneering schools cross country activity up to that time and beyond. On a Wednesday evening in March 1961 a small number of schools organised the first cross country race for boys at Tuam Racecourse.

The first All Ireland was held in the grounds of Garbally College, Ballinasloe, on a wet Wednesday in March 1964, a few days before Ireland hosted the International Cross Country Championships on Leopardstown Racecourse.

Interest expanded and when Leitrim schools St Felim’s and Presentation College Carrick on Shannon made their debut on a windy Wednesday March 10, 1965 an Intermediate race had been added for that year. A year later a junior event was to be included. It was a great start for the Ballinamore school with third year student Pat Joe Leddy coming home an impressive winner of the senior race.

Connacht introduced a girls championship in 1969 and the following year at Tuam Racecourse staged the first All Ireland Championship involving girls and boys, six races in all from all four provinces. The disused racecourse hosted it’s last cross country in 1974 after which it became a site for housing.

That weekend’s Observer also reported on the success of Pat Joe Leddy who won the National Junior Cross Country title at Mungret in Limerick the previous Sunday. The previous week it had reported on another even more outstanding performance at the National Senior Cross Country Championships on Mallow Racecourse where Pat Joe took seventh position and, ahead of many seasoned runners including former Internationals, squeezed into the seven strong Irish Team for the International (now called World) Cross Country Championships fixed for Tunis on Saturday March 16.

To add to the excitement of the day, his younger brother Eddie won the National Youths Championship held in conjunction.
The new Athletics body Bord Luthchleas na hEireann had very little money as national government sports grants did not come on stream until two years later so each selected athlete had to secure seventy pounds to go to Tunisia. The people of Leitrim rowed in behind Ballinamore Athletic Club and a very well supported collection was held outside a number of churches in south Leitrim the Sunday before the team set out.

So, as the Ballinamore group boarded teachers’ cars for the trip to Dublin that Saturday to represent Connacht in the three Schools All Irelands, former student Pat Joe Leddy, who had only done his Leaving Certificate the previous June, was joining his Irish team colleagues on the starting line at the big race in very hot conditions in Tunis.

The first of the three races in the Phoenix Park was the Junior event where St Felim’s finished tenth, one place behind Connacht Champions St Mary’s College, Boyle. Noel Maxwell was the first finisher in 27th position. The team event was won by St Patrick’s College, Cavan, the first leg of a double team win as they also took the Intermediate title.

The Ballinamore team lined up for the Intermediate event wearing maroon vests and green shorts. The race was over two miles and the early pace was set by the previous year’s winner, Frank Brady of St Patrick’s College Cavan.

Soon Eddie Leddy took over and moved further and further ahead of the field to record an easy victory, Connacht’s first Schools Cross Country All Ireland. Michael McTague finished an excellent fourth and the team also finished fourth just two points behind North Monastery of Cork who were third.

It had not been publicised that Eddie planned to run in the senior event as the element of surprise was deemed important in these circumstances. Nowadays the Girls senior race would take place between the two boys races providing a small measure of recovery time. At that time, however, the only recovery time available was the ten or so minutes it took for the officials to record the details of the line of finishers.

That time was used to make a change of gear so that when Eddie lined up for the Senior race he wore black shorts and a red vest as well as his different senior number.

When this three mile event had settled down after the first mile Eddie was among eight in the leading group. A mile later three had broken clear, Eddie, Paul O’Hare of St Patrick’s Belfast who was runner up in 1967 and John Allen of Regent House also Belfast. 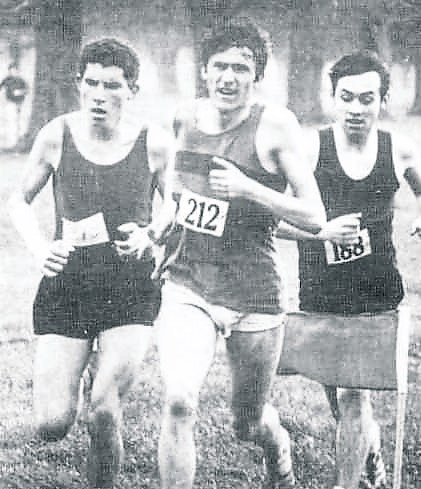 Halfway through the final lap Eddie took off and finished almost a hundred metres ahead of O’Hare with Allen third. Such a double was never done before or since.

Writing in the following day’s Sunday Independent John Comyn, himself an athlete, wrote “Ireland has produced many outstanding young athletes in the past but I have never seen anything to equal the performance of Leitrim’s 16 year old prodigy Eddie Leddy who made a procession of the All Ireland Colleges Intermediate Cross Country Championship in the Phoenix Park and less than ten minutes later made hacks of a very strong senior field ....... this most exciting middle distance runner was not in the least concerned by his exertions. “I could have gone around again, I feel great” was his comment after he had completed the double.”
The Sunday Press reporter wrote “It was a great day for the 16 year old Eddie Leddy competing for St Phelims, Ballinamore, in the All Ireland Schools and Colleges Cross Country Championships in the Phoenix Park yesterday. This strongly built athlete won the Intermediate title and came out shortly afterwards to win the Senior title. He is a younger brother of well known Connacht and All Ireland athlete P.J. Leddy.”

In Tunis the Irish Team finished eighth of thirteen teams with the English based Denis Quinlan the first home in 44th position. Pat Joe Leddy who was only a few weeks overage for the Junior race finished 86th with all but one of the team completing the course.

On Sunday morning, St Patrick’s Day, Eddie Leddy was part of a Ballinamore group of boys and girls who took part in the UCG Roadraces in Galway where, despite his exertions of the previous day, he easily won the Under 18 race.

Now living in the United States, Eddie obtained an Athletics Scholarship to East Tennessee State University after his Leaving Certificate as his brother had done the previous year and went on to represent Ireland in the 1972 Munich and 1976 Montreal Olympic Games. Setting an Irish 5000m record in Montreal he held this along with the 10,000m and 3000m steeplechase records for a period after the Games.