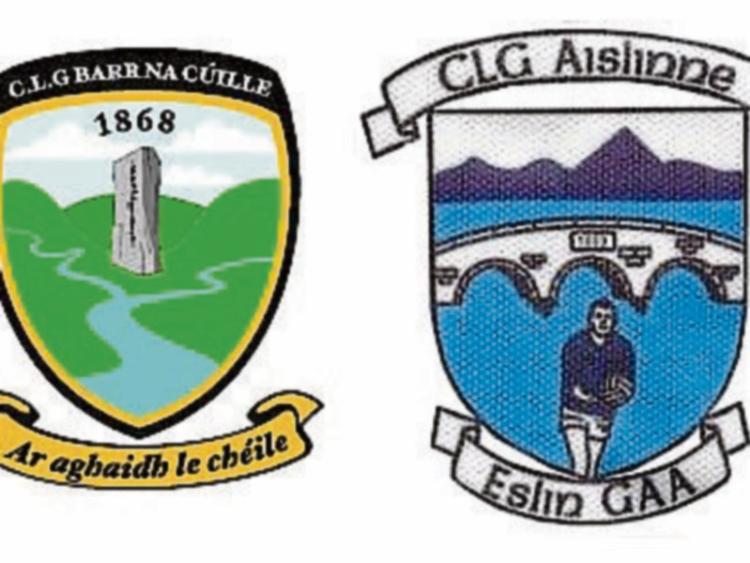 Bornacoola made hard work of earning their first two points of the Smith Monumentals IFC campaign when, despite dominating a poor quality game throughout, they struggled to put away a very disappointing Eslin side at a showery Dromod on Saturday evening.

It was a game in which Eslin simply never got going; Conor Beirne unusually failed to score from play and his threat was significantly nullified by a Bors defence that had captain Jason Conroy in fine form in the sweeper role.

The injured Shane Beirne was clearly a loss to the visitors who face an uphill battle to secure a quarter final berth. Indeed Eslin had a top class performance from goalkeeper Enda Turbett to thank for keeping the score down.

In the opening 12 minutes, the Bors created no fewer than four excellent goal chances but Turbett pulled off three great saves to deny the Bornacoola attack with Anthony Mulligan hitting the side netting with the fourth.

A second half penalty, dispatched clinically by Ronan Mulligan, finally saw Turbett’s goal line breached and was the crucial score.

The Bors may not have played to the level seen in their defeat to Ballinaglera but considering they lined out without four first choice starters in Damian Moran, Conor McCauley, Sean McKeon & Mervyn Howard, they will be happy with the two points earned, if not with an uneven performance.

It took nearly 15 minutes for the first score of the game to arrive – but that’s not to say that the first quarter was devoid of excitement.

It began when Ronan Mulligan burst through the Eslin rearguard only to see his goalbound effort touched on to the post by a great Enda Turbett save.

From the resultant 45, Anthony Mulligan blazed a second good goal chance into the side-netting and a minute later Turbett again denied Ronan Mulligan with an excellent one on one save.

James McNabola hit Eslin’s second wide in the 12th minute before Turbett again denied Ronan Mulligan with another one on one save so much so that when Mulligan found himself in a similar position in the 15th minute he elected to fist over the bar for the first score of the game.

Eslin responded two minutes later when Barry McLoughlin tapped over before two Shane Mallon points for the Bors left them 0-3 to 0-1 in front with 23 minutes played.

Eslin’s best period of the game came in the final five minutes of the half as two well taken Conor Beirne frees ensured the teams went in at the interval all square. It was a situation Eslin would have been content with, given the Bors failure to capitalise on their overall dominance in the opening period.

Bornacoola again struggled to convert possession into scores and despite an early Ronan Mulligan point restoring the home team’s advantage, it was Eslin who grabbed the initiative.

Conor Beirne took on the Bornacoola defence with a lengthy solo run before playing the ball across goal to the waiting Brian Higgins who gratefully palmed the ball to the Bor net.

The Bornacoola response was instant however. First wingback Sean O Riordan slotted a great point and in the 15th minute Shane Mallon levelled the scores from a free. The same player restored the Bor lead a minute later, pointing after an impressive mark.

Then came the penalty for the Bors – having been denied no fewer than three times in the opening period by Turbett, Ronan Mulligan might have been forgiven for passing the responsibility for the spot kick to a teammate. However, he stepped up and coolly slotted the ball to the net to put the Bors four in front and seemingly en route to a comfortable victory.

But Eslin responded. A long and harmless looking ball in from David Stenson bounced in front of the Bornacoola goals and in gathering the ball, goalkeeper Danny Farrell was adjudged to have carried it over his own goal line.

It was a fortuitous break for the Eslin men and reduced the deficit to a single point, but again the Bors replied instantly, this time Anthony Mulligan splitting the posts less than sixty seconds after the Eslin goal.

And in the 25th minute, Farrell atoned for his earlier error when he pointed a 45 for the Bors to leave three points between the sides coming down the final stretch.

A Conor Beirne free briefly reduced the gap again but the Bors finished strongest with points from Shane Mallon and Anthony Mulligan to secure their first points of the campaign and send them into this week’s visit to Aughnasheelin knowing that another victory should guarantee a place in the quarter finals.

Eslin on the other hand must prepare for the visit of a strong looking Ballinaglera and will know that they will have to see significant improvement from their first two games if they are to finally get off the mark in the 2020 Championship.