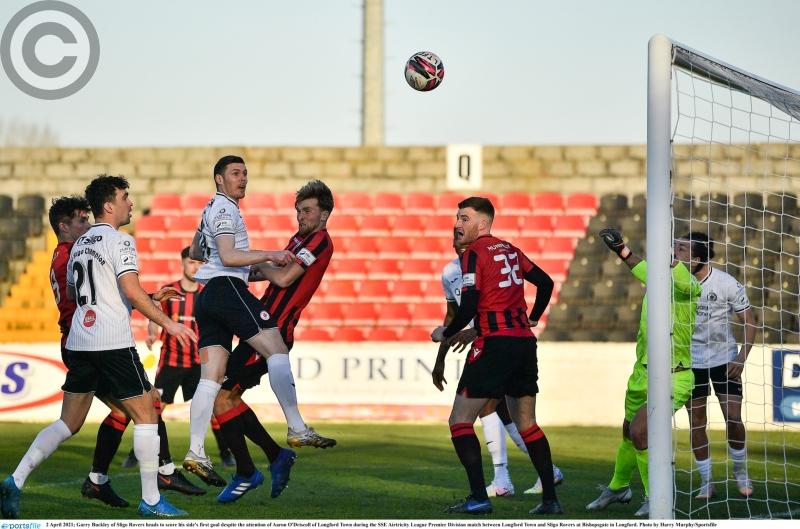 Garry Buckley scoring the winning goal for Sligo Rovers in the 47th minute ahead of Longford Town defender Aaron O'Driscoll in the game at Bishopsgate on Friday evening Photo: Harry Murphy/Sportsfile

Longford Town suffered a first defeat on their return to the Premier Division this season with Sligo Rovers defender Garry Buckley scoring the decisive only goal at Bishopsgate Stadium on Friday evening.

After a rather uneventful first half, the deadlock was eventually broken with a couple of minutes gone on the changeover when Buckley directed a close range header into the back of the net.

A Robbie McCourt corner was flicked on by Romeo Parkes into the path of Buckley and he hit the target from a few yards out, much to the sheer dismay of the home side who had defended resolutely up until then.

Having said that, it took a fine save from Town keeper Lee Steacy to keep out a goalbound strike from rising young Sligo star Johnny Kenny in the 39th minute and it must be said that the visitors were the better side in the scoreless first half.

Longford were facing a real uphill battle when they conceded the crucial goal in the early stages of the second half but were almost back on level terms in the 50th minute when Aodh Dervin drove a shot narrowly wide.

Sligo, calling on all their vast experience, were content to sit on the cushion of their slender advantage and stuck it out to collect all three vital points.

Longford vented their anger at a number of dubious decisions by Mayo referee Damien McGrath that went against them in their determination to get something out of the game.

It was very frustrating indeed and even at that the equaliser nearly materialised in the 84th minute when Dylan Grimes won the ball in the box and proceeded to set up a great goal chance for Aodh Dervin but the local star saw his shot deflected out for a corner.

In the absence of injured striker Rob Manley, the Town lacked a cutting edge in attack and their cause was further hampered when both Dean Byrne and Callum Warfield were forced to retire injured during the course of the first half.

The focus now switches to the next league game at home to Drogheda United on Saturday week in a bid to bounce back from the setback against Sligo Rovers.