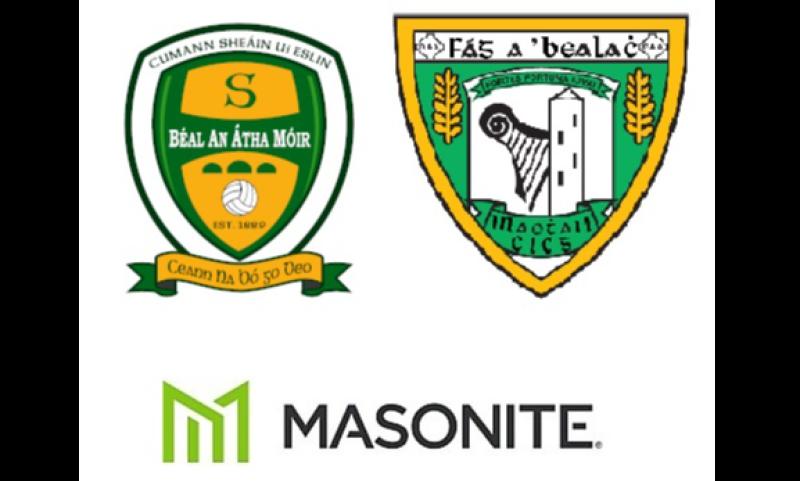 Mohill avenged their 2021 county final defeat by Ballinamore with a come from behind win thanks to a winning Jordan Reynolds point and a retaken Keith Beirne penalty at end of an exciting Masonite Division 1 clash in a damp Ballinamore on Friday.

The crowd of about 700, who got good value for their money, saw the Mohill men draw first blood when Keith Beirne put over an opening minute point from a 55 metre free. But two minutes later Wayne McKeon answered with a similar score from a 60 metre placed ball.

A Beirne point from play had Mohill back in front but Dean McGovern hit back with a 5th minute point. Ballinamore edged into a two point advantage  thanks to points by Luke Murphy and Niall McGovern who Murphy put through with an inch perfect kick pass.

The Mohill men had a let off when goalkeeper Padraig Tighe denied a Shane Moran goal chance. In response Mohill upped their game and were back on level terms by the 18th minute after Caillin Canning and Jordan Reynolds both pointed with Keith Beirne providing the final pass for Reynolds' score.

After a foul on Oisin Madden four minutes later, Keith Beirne tapped over the free to edge Mohill ahead again. Ballinamore's Dylan Beirne levelled the game for a fourth time when he fired over on the 26-minute mark.

The scoreline remained deadlocked at the interval after Domhnaill Flynn shot over and  Luke Murphy converted a free after a foul on Dean McGovern to leave it 0-6 apiece.

In the opening action of the second half, Shane Moran shot over for the home side and Keith Beirne pointed al free. Then Domhnaill Flynn pointed to get Mohill noses back front but Ballinamore enjoyed a purple patch during the next 24 minutes.

In this period it looked like they were going to repeat their 2021 County Final success over the Mohill men as Ballinamore supporters were given something to cheer about when Luke Murphy crashed home a 36th minute goal after receiving a pass from Mark McGrory.

Dylan Beirne added a point for Ballinamore shortly afterwards and Alan McLoughlin, back in the Mohill ranks after a spell with St Judes’s in Dublin, answered with a point to leave his side just a goal adrift.

But two clinically hit points from well won marks by Paul Moran then gave Ballinamore a four point advantage and kept his side in the driving seat.

Mohill hung in and Keith Beirne pointed after he was fouled to leave his side three points in arrears once again. After that in the final ten minutes of the frantic action it was all hammer and tongs action with Ballinamore striving to hold onto their lead and Mohill assuredly trying to turn the tables on them, and still chasing victory in a clearly focused manner.

Mohill’s Padraig Tighe denied a goal bound effort from Dean McGovern but Paul Moran restored the Ballinamore  advantage when he split the uprights.

The drama intensified when a foul on Keith Beirne in the square saw the Mohill men win a penalty but  keeper Darren Maxwell stopped Beirne's spot kick.

The drama continued when referee Ray McBrien immediately ordered the spot kick to be retaken for an infringement encroachment inside the 13-metre line by a Ballinamore outfield player when Keith Beirne was taking his spot kick. Beirne made no mistake with his second spot kick hen he placed the ball in the lower left-hand corner of the Ballinamore net. It was now a one point game as Ballinamore's lead was reduced to the minimum.

As game's theatre-like action continued in the fourth minute of added time, Ballinamore got a chance to perhaps snatch a  Division 1 league final place from undefeated Mohill when Luke Murphy was fouled on the visitor's 13 metre line.

But for Ballinamore to do this they needed Wayne McKeon, who stepped up to take the free, to hammer the ball past a packed visitor's player's Mohill goal line. However Ballinamore's league final dream was ended when McKeon drove his effort well wide and it was Mohill who survived to contest this year's county league decider.