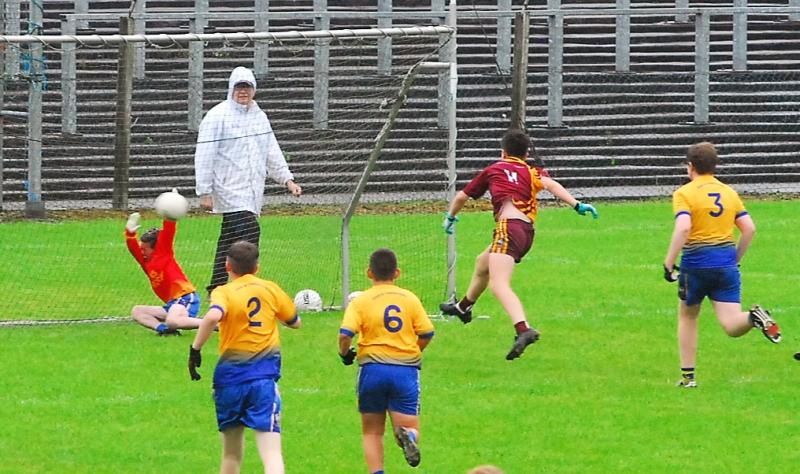 With Bosquette giving an incredible display that ended up with him scoring 2-10, Annaduff's zeal all around the field meant that the undefeated Manor lads never got to grips with their opponents despite some real impressive performances from Senan Kelly and Cian Boylan in awful conditions last Monday.

Glencar Manorhamilton got the perfect start when, just 13 seconds after the throw-in, Cian Boylan fired a brilliant low shot to the Annaduff net that gave the keeper no chance. Senan Kelly put a free wide but Annaduff steadied themselves with Joshua Bosquette starting off a superb evening with a good point from play on two minutes.

Bosquette added another but Annaduff almost conceded a second goal only for keeper Tadgh O’Shea to pull off a brilliant save to deny Boylan a second goal. Annaduff drew level with a Bosquette free on seven minutes and two excellent points from play in the next two minutes from the youngster put Annaduff in front.

With Cathal Rowley providing the ammunition and Manor struggling to escape the grasp of Rowley and Caoimhin O’Sullivan in the middle of the field, Annaduff were in complete control with the strong wind at their backs. Rory McNabola and two Bosquette frees extended the lead.

McNabola had a goal shot saved on the line but a goal did come, albeit at the other end when referee Enda Egan gave Sonny Malone the benefit of the doubt after a collision with an Annaduff player in the middle of the field. Egan waved play on, Malone found Senan Kelly with a long pass and the deadly forward buried the ball in the net.

Annaduff’s response was the winning of the match - Bosquette immediately put over a free before he ran onto a high breaking ball and buried it in the net. From the kickout, Annaduff won the ball back and Ethan Neary produced a great sidestep and clinical finish for a second goal inside a minute.

Annaduff almost had a third goal only for Jay Loughlin to make a great full length diving save to divert a low Bosquette shot away from danger but Glencar Manorhamilton trailed 2-9 to 2-0 at the break.

Glencar Manor immediately set out reducing the gap with Kelly denied a goal by a good O’Shea stop. Kelly did fire over two excellent points and when Cian Boylan pounced on an errant kickout after four minutes, he ran in to blast the ball to the net.

Annaduff’s nine point lead was now down to four points but Ethan Neary steadied the ship with a good point on eight minutes. However, two more Kelly frees cut the gap although Manor did miss chances in this period, O’Shea making yet another good save while Kelly had two wides.

The game swung back in Annaduff’s favour on 15 minutes when Barra O’Shea and Joel Heslin did great work to free Bosquette who charged through the middle to fire a rasper to the net. Cathal Rowley added a point before Bosquette curled a fabulous free from the corner over the bar.

Kelly kept Manor within seven points with a point five minutes from time but Annaduff sealed their victory when Bosquette’s initial shot was blocked but Ethan Neary grabbed his second major to all but finish the game.

Neary and Bosquette would add a point apiece before the finish while Cian Boylan scored a hat-trick of fine goals for Glencar Manorhamilton before the final whistle.