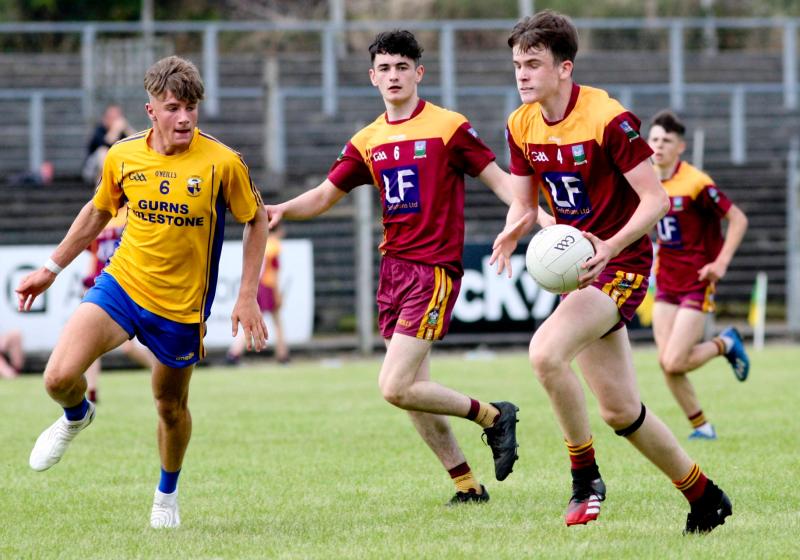 They may have been very wasteful but a dominant Annaduff eventually found their scoring boots to see off the challenge of Glencar Manorhamilton in Sunday's Newtowngore Engineering Division 2 Final last Sunday in Avant Money Pairc Sean Mac Diarmada.

At times it looked as if Annaduff were going to rue a host of missed chances as Glencar Manor keeper Shaun Sheridan made some crucial saves but eventually, with 51 minutes on the clock, they made the breakthrough when Liam McNamee buried the ball in the net at the second time of asking.

That lifted whatever burdens were holding back the Annaduff men as they added a further 1-3 to seal a famous win, adding to their U13 Division 1 title over the same opposition just six days previously.

Glencar Manorhamilton made the better start but couldn't cope with the desire and workrate of the Annaduff lads who turned them over time and time again  and it was only a defiant rearguard action and poor Annaduff accuracy that kept the game close for so long.

Glencar Manorhamilton got off to a wonderful start, winning the ball from the throw-in, sending the ball to the charging Caoimhin McManus who blasted a rocket to the net after just 15 seconds.

Darren Cox replied with a free but Ronan Fox hit back for Manor who added a free from Jack Kelly on six minutes. Glencar Manor had a couple of wides before McManus fired over as they looked in control at this early stage.

However, two points from Darren Cox, the first a free and the second a brilliant effort on the run from the right corner, got Annaduff up and running. However, they were left cursing some bad finishing and missed chances as they hit five wides and also saw Manor keeper Shaun Sheridan make three vital saves from goal chances.

The last save from Cox proved costly as Sheridan injured his hand in making the save and had to go off. That didn’t contribute to Manor’s downfall as Annaduff finally made their pressure tell when Darren Cox’s run was ended by a tap in goal for Senan Mooney, typing the scores with four minutes left in the half.

Mooney saw a free batted off the line before Caelan Newton reacted first to a shot that fell short to point. The industrious Kyle Russell pointed after a block on a Mooney shot as Annaduff led 1-5 to 1-3 at the break, scarce value for their dominance.

If the misses bothered them, it didn’t show as Cox swapped frees with Oisin Gurn before scoring a brilliant point on the run on five minutes. Another Cox free followed before another period of costly misses, from both sides, as neither side could score for 12 minutes.

When the deadlock was broken, it was a game winning score as Liam McNamee forced home the ball after a brilliant Cox pass on 51 minutes. Eoghan Ride (2) and Senan Mooney quickly added scores as it seemed as if Glencar Manor’s resistance was finally broken.

Jack Kelly converted a superb free on 28 minutes, their first score in 26 minutes before sub Darragh Boylan produced the finish of the day with a great goal in the last minute of normal time.

But Annaduff would have the last word when Darren Cox’s trademark sidestep tempted a defender into a rash challenge, the penalty converted by Cox which gave the returned Sheridan absolutely no chance.