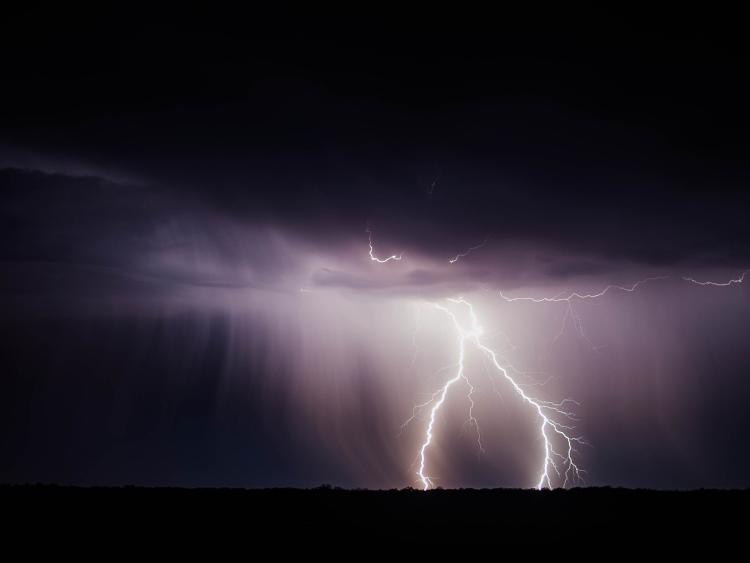 Met Éireann has put all counties in Ireland on alert for thunderstorms that will feature severe downpours, hail and could lead to flooding.

The forecaster has issued a Status Yellow - thunder warning for Ireland, North and South.

It says heavy thunderstorms are expected to develop later on Thursday and Thursday night with some severe downpours, hail and spot flooding. However, it also advises that due to the localised nature of thunderstorms some parts of the country will remain dry.

The alert for the 32 counties was issued in conjunction with Met Éireann's official partner the Met Office in the UK.

Status Yellow Thunderstorm warning has been issued for the whole of Ireland for Thursday afternoon through to Friday morning.

See below the latest cloud and rainfall forecast from our HARMONIE weather model. Generally dry today, but some scattered showers and thunderstorms are possible on Thursday overnight into Friday.

Low pressure systems playing a role in our weather over the coming days. See below our 7 day Atlantic Chart, showing the pressure and precipitation forecast in 6 hours intervals.https://t.co/9Giuj4CR5m

The national forecast issued at 11.24am on Wednesday is as follows:

THURSDAY 25TH JUNE
Tomorrow will be a warm and sunny day with temperatures ranging from 20 to 24 degrees in the west but up to 25 to 28 degrees in the east. Showers will break out later in the afternoon, with some thundery downpours expected. Light northerly or variable winds.

Thursday night - an ongoing risk of heavy showers with lightning. Winds will be mainly light northerly or variable becoming light westerly. Lowest temperatures of 11 to 14 degrees.

Friday will be cooler with temperatures dropping back to between 15 and 21 degrees, the higher values over east Ulster. There'll be showers, some of them heavy or prolonged and particularly affecting Ulster. Light westerly or variable winds.

Saturday will be cooler still with a freshening westerly wind bringing further showers. Temperatures of 14 to 17 degrees.

A fresh westerly wind on Sunday will bring further spells of rain or showers with temperatures of just 12 to 16 degrees.

The extended outlook into the early days of next week is for continued unsettled conditions with rain or showers at times.