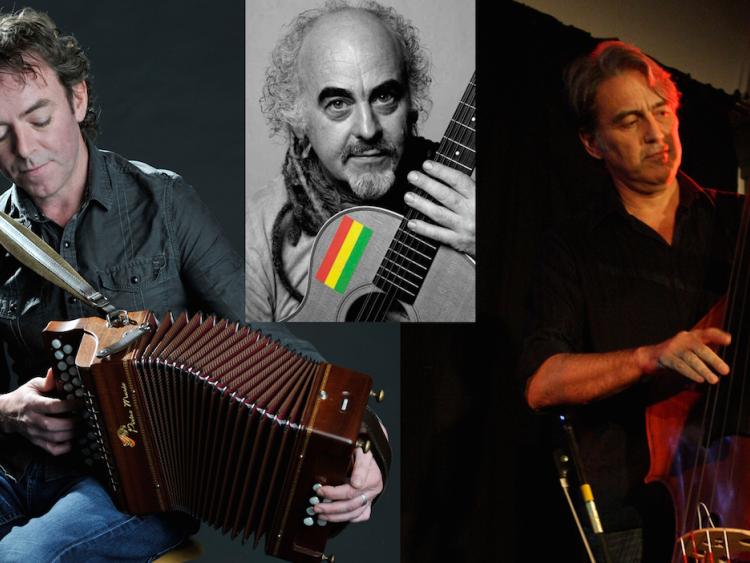 Dermot Byrne, one of Ireland’s finest traditional accordion players, comes to The Dock as part of his current national tour.
As a member of Altan, Dermot performed, recorded and toured extensively with the group along with artists like Donal Lunny, Steve Cooney and Stephane Grapelli, bringing the beauty and joy of traditional Irish music to audiences all over the world.

For his tour Dermot will be joined by Australian Steve Cooney on guitar and Tyrone man Trevor Hutchinson on bass. Both Steve and Trevor have impeccable traditional music credentials with extensive touring, recording and performance experience alongside the greats of Irish traditional music.

Australian-born guitarist, bassist, producer and didgeridoo player Steve Cooney is one of the most dynamic modern performers in traditional music.

Bassist Trevor Hutchinson started his musical career in the late 70s playing electric bass with the innovative Belfast band, Katmandu. In 1986 he joined The Waterboys and toured with them until 1991. After switching to double bass he hooked up with Sharon Shannon to launch her solo career.
He has performed and recorded with many artists over the years including; The Waterboys, Luka Bloom, Karen Casey, and De Danann. This year Trevor has played with his band Lunasa in America, Switzerland, France and Japan.

Tickets for this wonderful gig are available now from The Dock box office on (071)9650828 or on line at www.thedock.ie