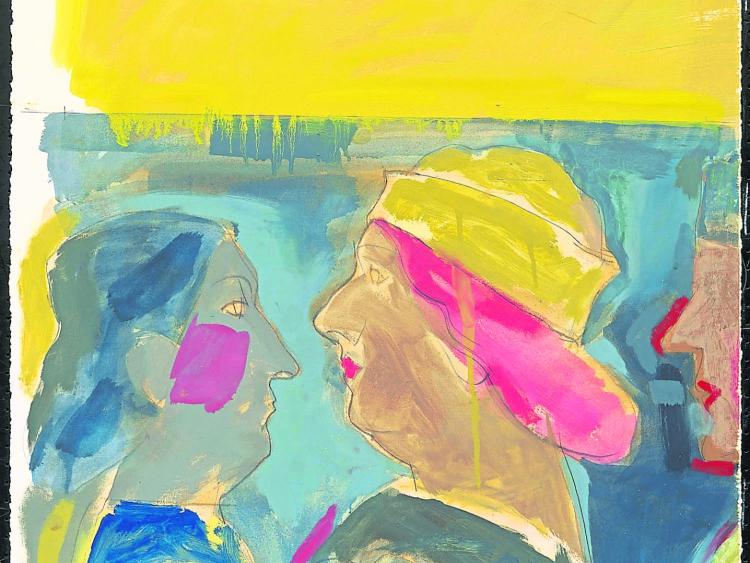 A work by Alice Hanratty.

'Like Me' which opened to the public last Saturday at The Dock Arts Centre, Carrick-on-Shannon is an exhibition featuring work from three distinctive Irish artists.
The title makes reference to art-historical motifs such as classical portraiture and painting, and elements such as the frieze, iconography, and newer processes of collage, assemblage and the digital deconstruction of the image.
The works refer to the body and the human experience, through historical and contemporary lens. This is the third in a series of exhibitions which bring together artists at varying stages of their artistic careers.
Alice Hanratty was born in Dublin and studied painting and printmaking at the National College of Art in Dublin and at the Hornsey College of Art, London.
In the late 60's she worked in Africa and this was a formative influence on her work. Her subjects reference a variety of subjects from medieval and renaissance paintings and indigenous African wood-carvings.
For this exhibition she has created a series of new painting works and made a large-scale installation in the mezzanine of The Dock. She is a member of Aosdána, and has exhibited widely both in Ireland and internationally.
Kian Benson Bailes lives and works in Sligo. He alludes to discourses surrounding identity, its construction and deconstruction.
He makes material and spatial interventions that reference the various narratives attached to ideas of authenticity, identity and the body.
He is interested in the commodification of queer spaces and cultures, the presentation of these spaces through technologies, and how these juxtapose with mainstream heteronormativity and concepts surrounding notions of identity and its construction. He has recently exhibited in Tulca, Galway and CCA Derry.
Eleanor McCaughey lives and works in Dublin. Her work is an exploration of contemporary representations of portraiture, referencing the tradition of still life.
The work juxtaposes past ideas of identity and power with new ideas, taking reference from elaborately embellished Asmat ancestor skulls, Christian iconography to the modern day selfie.
Recent work has referenced from Adam Curtis’s 2002 documentary series ‘Century of the self’ which advances the thesis that Freud’s views of the unconscious set the stage for corporations and later politicians, to market to our unconscious fears and desires.
Her work responds to ideas of self expression, the way we examine and present ourselves, attitudes to fashions and the distorting lens of social media.
Eleanor has exhibited both nationally and internationally including the National Portrait Gallery London, the Royal Ulster Academy Belfast, and the RHA Dublin.
'Like Me' continues until Saturday, March, 31. The Galleries are open Monday to Friday from 10am top 6pm and Saturday from 10.30am to 5pm Admission to the galleries is free and all are welcome.