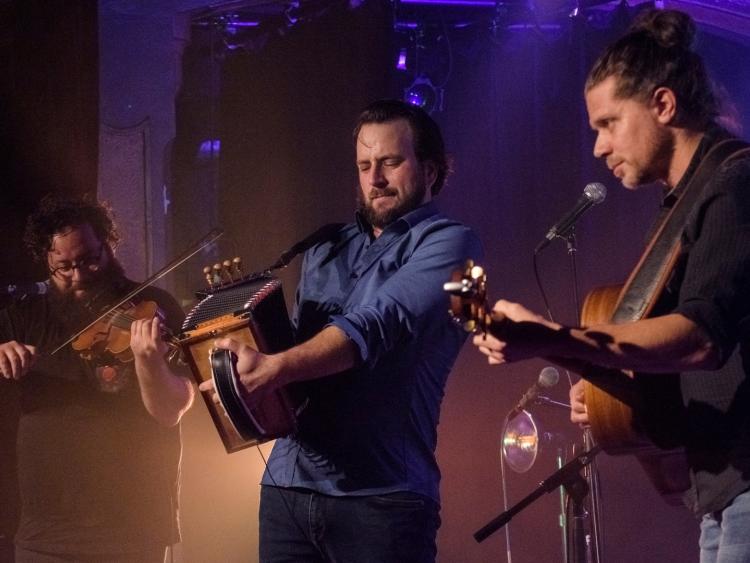 French Canadian supergroup De Temps Antan are back in The Dock, Carrick-on-Shannon on Thursday, May 2.

According to those who have been to their gigs De Temps Antan have enough power to drive a nuclear furnace  and certainly anyone who was a their last appearance in The Dock in 2015 will confirm that fact.

This irresistible French Canadian folk super group De Temps Antan, have captured the hearts of audiences across the globe with their stunning interpretations of time-honoured melodies from Quebec.
Driven by the stomping “tac-tic-a-tac” of “les pieds” (a type of clog), their rough-hewn sound is an utterly infectious mix of boundless energy and the unmistakeable joie de vivre of traditional Quebecois music.
Their live shows offer a hint of the contemporary - dosed with uncontrolled laughter, catchy honky tonk tunes, and sudden, impromptu shifts in harmony - that speak to familiar rhythms of the past.

De Temps Antan’s virtuosos Éric Beaudry, David Boulanger and Pierre-Luc Dupuis have all been members of La Bottine Souriante, arguably the most influential Quebecois band of modern times.
In De Temps Antan, their powerful vocals create joyous harmonies, combining with the delightful fiddle of Boulanger, the explosive accordion playing of Dupuis and the superb guitar accompaniment of Beaudry, along with harmonica, bouzouki and a number of other instruments.

Their set in Ireland will include close-up call-and-response vocals that date back to the work songs of Quebec’s lumber camps, and music from De Temps Antan’s latest album Consolez-vous.
The band are Éric Beaudry  on voice, guitar, mandolin and bouzouki; David Boulanger on voice and fiddle and Pierre-Luc Dupuis  on voice, accordion, harmonica and jaw’s harp.

Also read: By order of the Peaky Blinders