Plenty of fun for everyone at Ballinamore Family Festival 2019 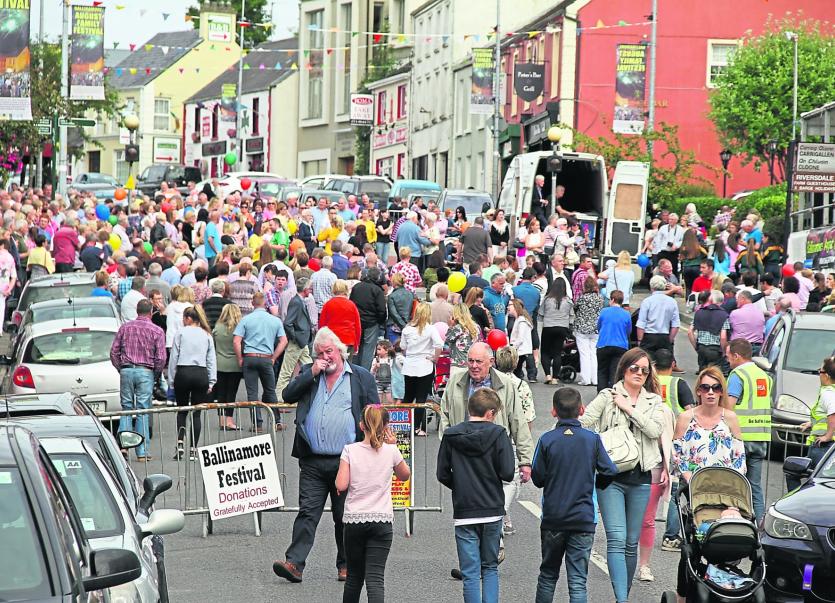 Join the crowds at this year's Family Festival in Ballinamore

One of the most anticipated festivals in the North West - Ballinamore Family Festival - returns to town for its 53rd year from August 11 to 18.
Like every year, the town puts on a unique festival that is made up of free events for seven days, exactly what we all need as the Summer holidays draw to a close.
The festival opens on Sunday, August 11 with local RTE star, Stella McGirl and the committee's longest serving chairperson, Jackie McTague cutting the ribbon at 3pm.
This will be followed by live music on the platform by Jimmy Buckley at 3.30pm and Abba-esque at 9pm.
Monday, August 12 is jam packed with canoeing and water skills, mural painting, art and photographic exhibitions, a swimming competition, family fun evening and soccer skills competition.
Teams from Ballinamore and surrounding areas will also be competing in the Bed Race with prize money sponsored by The Poor Scholar.
Rounding off the evening's events is the Céilí at the Crossroads - a traditional Irish music night on the platform starting at 8.30pm and the festival Table Quiz in Jackie's Bar at 10pm.
Tuesday, August 13 sees the return of the Ballinamore Agricultural Show Day. Now in it's 59th year, the Show Day offers plenty of competitions, entertainment and amusements to keep everyone happy.
Also on Tuesday is the GAA Skills competition at St Felim's Pitch between 5pm and 7pm and then the Ninja Warriors (Ballinamore style of course!) will be taking to the main street for Heat 1 of the competition with prize money sponsored by Jackie's Bar.
Chance your luck with Festival Bingo in the Sports Complex in conjunction with Aughnasheelin Bingo and then enjoy the free open air concert with Richie Remo.
Wednesday, August 14 is a mixed bag with a children's tour of the fire station and display of equipment by An Garda Siochana and the Civil Defence at 2pm. This is followed by the Bonny Baby competition in the Commercial Hotel, sponsored by Gordon Hughes Estate Agents.
From 5-7pm there will be a Soccer Skills Competition at St Felim's Pitch in conjunction with Abbey Rovers and Casserly's Fun Fair is returning to Golf Links Road at 7pm with Heat 2 of the Ninja Warriors and a free open air concert by Twisted Ninja later that evening.
Thursday, August 15 you can Draw with Dawn, children can take part in assorted fitness fun activities, or why not join the John McGahern Tour!
There will be a Ballinamore Community Hall information evening in Ní Fhionn's along with the Over 40s Men's Football in Sean O'Heslin's GAA Park sponsored by Jackie McTague.
A star attraction on the night is a free open air concert with Robert Mizzell.
Friday, August 16 will cater for tiny tots disco and senior citizens party and everything in between!
The GAA skills competition continues and there is also a children's treasure hunt planned.
Ballinamore Athletic Club will hold their 10k and 5k race from 7.30pm and there is also a fabulous free open air concert with Lee Matthews as the star attraction.
Saturday, August 17 kicks off with the children's fancy dress competition and kids talent competition.
Sean O'Heslin's is hosting a Gaelic GAA Blitz for Under 12s and there will also be a political and military walking tour of Ballinamore with Cormac O'Suilleabhain.
Don't forget the Hunt the Duck final and John Joe McGirl Commemoration Parade! Finalising events will be a free open air concert by The Rod Stewart Tribute Band.
The festival draws to a close on Sunday, August 18 with a free family fun day on Main Street with kids obstacles slides and more. Don't forget to bring your teddy for the picnic at 3.30pm.
Star, Johnny Brady will then bring the festival to a close with a free open air concert.
The end of Festival fireworks display always impresses, catch them on the Golf Links Road from 11.15pm. All the pubs in town will provide music and entertainment every night during the festival.
Pick up your brochure in town now and stay up to date with any changes during the festival on FB/ballinamorefestival or @Ballinamorefest on twitter.