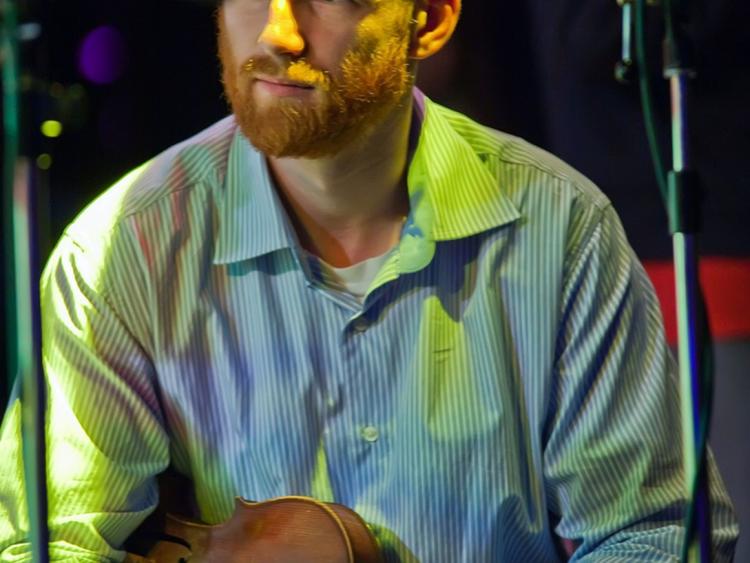 Fiddle player Mossie Martin will be well known to may Leitrim music lovers, although he hails from Derrynacoosan near the village of Keadue in north Roscommon.

Mossie has been a regular and very popular contributor to the vibrant traditional music scene in Leitrim over many years.
His style is rooted in the North Connaught tradition and he performs regularly with the Dartry Ceili Band as well as collaborating with other traditional artists including Draíocht (June McCormack and Michael Rooney), Leonard Barry, Sean & Noelle Carroll, Bernard Flaherty & Donal O’Connor.

A tutor of the Drumshanbo Traditional Irish Music PLC course, Mossie has been performing and teaching traditional music for almost two decades and has recorded several times with the Dartry Ceili Band, Lúnasa and Dervish.
His new album The Humours of Derrynacoosan, in which he explores old favourites and new compositions of North Connaught musicians, has been very well received by music audiences and critics alike.

The Dock are delighted that Mossie has decided to launch the record for Leitrim audiences in The Dock.
This Friday, September 13, he will be accompanied by local man John Blake on guitar and piano, a musician who has been at the forefront of traditional Irish music for many years both as a musician and recording engineer.
John has had a hand in countless albums including recordings by Brian Rooney, Teada, Harry Bradley, Jesse Smith, The Kane Sisters and Padraic O’Reilly.
Mossie’s album will be available for sale on the night and, rumour has it that we can expect a few surprise guests on the night as well so do join us if you can for what will be a great gig.
Tickets are on sale now from The Dock box office on (071) 9650828 or on line at www.thedock.ie

Culture Night
With culture night on nationally next Friday, The Dock have a massive line up.
The programme will include making your own painting, using
your smartphone to make great images, collective sculpture installation, gallery tours, theatre, film
screenings, rehearsed readings, music and more.
All free from 4pm til late so do drop in.
Stay tuned to next week's paper when we will have a full line up of all the events happening around the county for Culture Night.

Also read: UK and NI Blood Donation Ban to be lifted in October