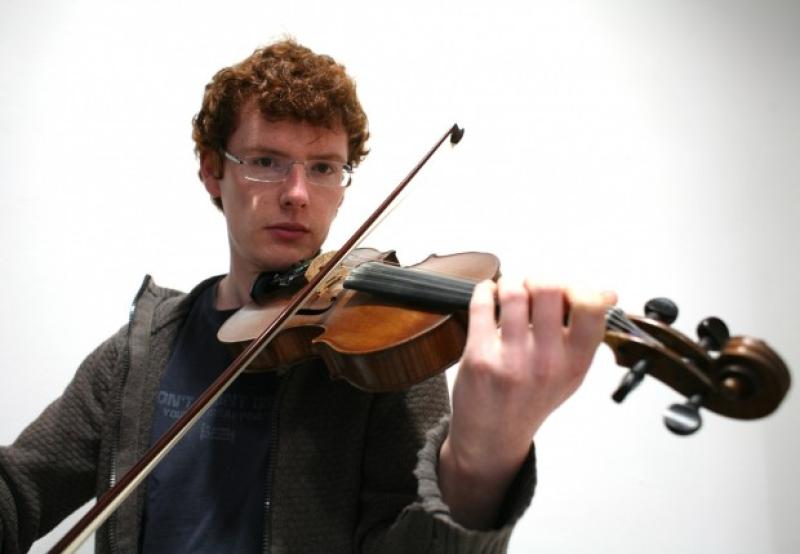 Shane Meehan is one of the recipients of the commission award.

The Dock Arts Centre in Carrick-on-Shannon has launched a series of traditional music commissions designed to offer young musicians local support and encouragement to keep creating new work and to continue their connection with Leitrim audiences while the The Dock remains closed to the public.
The commission award has been give to three young traditional musicians, Shane Meehan from Carrick-on-Shannon, Fiachra Guihen from Keadue in Roscommon and Stephen Doherty from Foxford in Co Mayo.
The aim of the commission is to resource these musicians to develop and research new work, compositions, arrangements, and/ or develop new ways of working.
Shane Meehan launched his debut album 'Twill Do’ last year. He is a fiddle player from Carrick-on-Shannon. Initially he was taught by his grandfather John Meehan who was a flute and fiddle player. He grew up playing with local musicians Damian O’Brien, Oliver Loughlin and Padraig McGovern to name but a few. In his teens he took an interest in composition and this soon led to his involvement in the first Leitrim Equation project in 2009 alongside Lúnasa.
Two reels composed by Shane featured on the subsequent album The Leitrim Equation and since then Shane has gone on to win an All-Ireland with The Moylurg Céilí Band and their album 'The Rest is History' includes a set of tunes composed by Shane.
Shane has also appeared on Geantraí and An Samhradh Linn playing his own compositions alongside Seán Gilrane, Lorraine Sweeney, Daithí Gormley and John McCartin. “Twill Do” premiered 20 original compositions, which he launched at The Dock, and featured Darren Breslin and Bríd Harper on box and fiddle. Macdara Ó’Faoláin, from Ring, Co. Waterford, was backing on bouzouki alongside Kevin Brehony, Co Sligo on piano.
For this commission Shane will be developing his musical performance and compositional work to date. Shane intends to explore and research Leitrim's rich musical heritage with a focus on new compositional work.
Fiachra Guihen is a musician from Keadue, Co Roscommon. He plays mainly traditional music and has played with many different groups locally and nationally most notably the National Folk Orchestra of Ireland.
He began playing the tin whistle at seven, moving on to the flute and as a teenager took up the harp. He has received a number of All-Ireland medals for the harp and also takes part of a Grupa Cheoil. He has played in various different venues including the National Concert Hall, Dublin and the Barbican Theatre, London. He is currently studying Technology Education at the University of Limerick.
For this commission Fiachra will be researching the works and life of Josie McDermott, a well known musician from Coolmeen, near Ballyfarnon, and a renowned composer and playwright. Fiachra will be researching McDermott's work with a longer-term view to putting together a compilation of his work and working towards a performance of new work influenced by this research.
Stephen Doherty is a multi-instrumentalist from Foxford in Mayo playing flute, whistle, accordion, guitar, piano and bodhrán. He performs regularly on the Sean-Nós dancing and céilí scene fronting The Salamanca Ceili Band.
In the past few years he has shared the stage with artists like, Lúnasa, Sean Keane, Dolores Keane, We Banjo 3, Dougie MacLean, Michael McGoldrick, Dermot Byrne, Slide, Sharon Shannon and has had recording sessions in Nashville with Alison Brown and Tim O’Brien.
He has performed in over 20 countries to date and has also featured on national tv.
Stephen is a resident artist at The Dock and with the Hawk's Well in Sligo. This residency is supported by The Arts Council and is a development of the Creative Counties project.
In 2013, Stephen was approached to produce and compose music for a unique new Irish Dance show titled ‘TitanicDance’. The show was launched to a sell out audience of 2000 people at The Odyssey Arena in Belfast and has since toured China, America and the UK.
In 2014 Stephen appeared in an Irish big screen film, ‘Jimmy's Hall’ , directed by Ken Loach.
Over the course of his residency Stephen intends to develop new work for film and the moving image, and to work in this area extending the reach and scope of his music into areas other than traditional performance.
The Dock will keep updating their website images and news and will be posting regularly on their social media channels as each of the musicians work progresses over the next three months.
Visit www.thedock.ie for more details on the three musicians and their work.