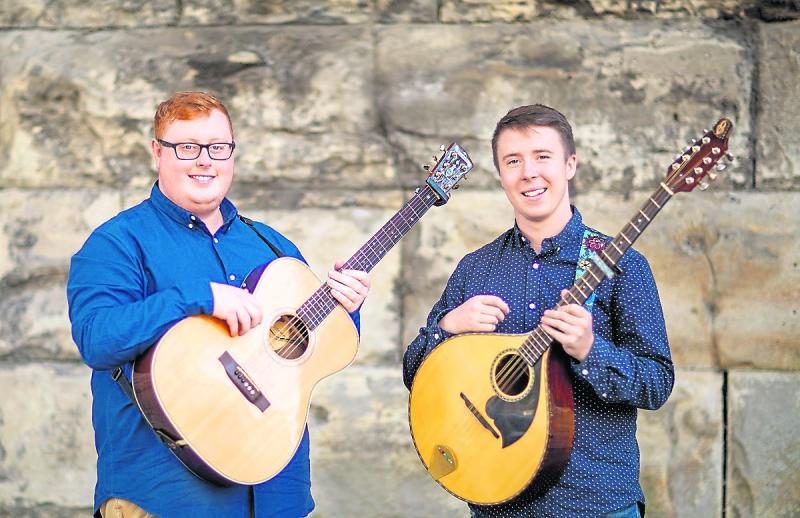 Back at The Dock continues this weekend with a great line up for Friday and Saturday night.

The pair visit Carrick on Shannon for their debut performance and bring with them a combined musical lineage that they can trace back to the 1880s.

Both Cathal and Marty come from families that are steeped in Irish traditional music and song and they have travelled all over the world performing with The Friel Sisters, The High Seas, Aoife Scott and many others.

Hailing from Gaoth Dobhair, Cathal Ó Curráin is an accomplished fiddle, banjo and bouzouki player and a Sean Nós singer. Growing up in Donegal, Cathal was constantly surrounded by Irish traditional music.

Marty Barry comes from Banbridge, Co. Down is a multi-instrumentalist and vocalist, Marty inherited his love of music from his great-grandmother the renowned singer Margaret Barry.
Cathal’s most recent work includes an Album with The High Seas, The Conifers, The Friel Sisters and Aoife Scott’s “Homebird” with the multi- Grammy award winning, Ron Block of Alisson Krauss and Union Station. Marty has featured on recent releases such as Emily Flack’s ‘Throwing Shapes’ and Alan Reid and Rachel Conlan’s ‘A Quare Yield, and is currently putting the final touches to his debut solo release.
The show kicks off at the outdoor performance area at 7pm.

Green Bird with Mandi Frankham, Natalia Beylis & Mohammad Syfkhan play Back At The Dock on Saturday August 21.
Instrument wise you can expect variety with an eclectic mix of mandolins, guitars, bouzouki, violin, voices and ethereal electronics in the lovely surrounding s of The Dock’s outdoor performance space.

Green Bird is the alt folk duo of Cliodhna Quinlan and Mark Murphy. As a duo they perform tuneful original folk music and songs with a hint of strangeness, that fit around many genres including Traditional, Old-Time and Americana.
They will be joined by well known Leitrim singer, Mandi Frankham.

Cliodhna and Mark have performed in the Dock several times over the past few years, playing their own soundtracks to classic silent movies such as Nosferatu and The Hunchback of Notre Dame. Both are well known musicians, and met as members of the swing jazz band, the HoneyBees.

Cliodhna an accomplished fiddler, has worked and toured with many well known artists such as songwriter and percussionist Ronan O Snodaigh, theatre director Mike Scott and singer Hazel O Connor. Mark, a piano player, multi-instrumentalist and music teacher is the pianist with jazz group The Kobe Trio.
Their recent debut album was declared “One of the finds of 2020” on BBC radio Ulster.

Leitrim based singer songwriter Mandi Frankham has been gigging since the age of 16. Mandi has enjoyed performing and recording many genres including folk, rock, blues & bluegrass.
Her most recent work is the digitally released album ‘Free to Love’ by ‘Frankham & Love’.
Natalia Beylis' work revolves somewhere between sonic story-teller and outer-sounds musician and has released 32 albums as a solo artist and collaborator.

Mohammad Syfkhan is a singer and bouzouki player. He blends songs and music from various traditions to provide his own unique take on Syrian folk music.

This extraordinary show begins at 7pm.
Tickets can be purchased for both concerts on 0719650828 or www.thedock.ie.

The concert is supported by the Local Live Performance Programming Scheme via Leitrim County Council and the Department of Tourism, Culture, Arts, Gaeltacht, Sport and Media.