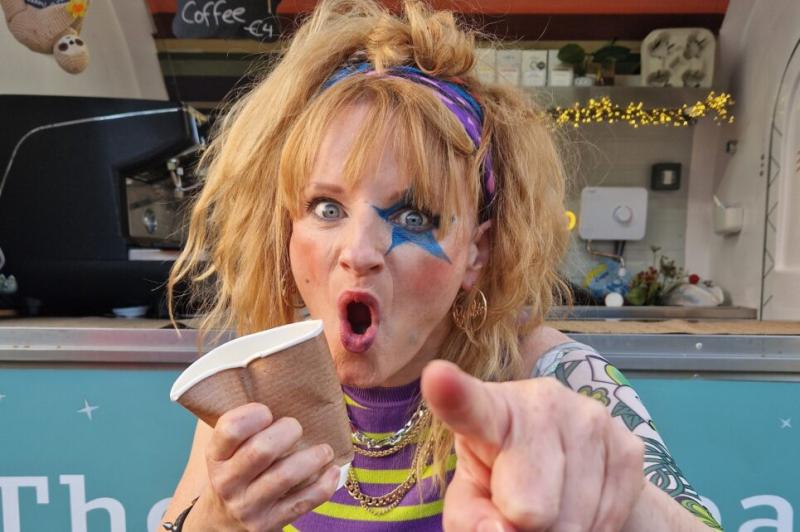 GomBean is a hilarious comedy written and performed by Niamh McGrath

GomBean, a hilarious comedy written and performed by Niamh McGrath, sees the reincarnated 16th century pirate queen running a horsebox coffee van on a pier in a fictional town in Sligo.

Directed by highly-regarded writer, director and actor Seamus O'Rourke, the comedy sees Niamh performing multiple roles as she delivers a high-octane dose of caffeine-fuelled fun. The show will preview on Thursday, September 15th, with its world premiere the following evening.

Niamh is an actor, playwright and director from Enniscrone, Co Sligo. When the Covid-19 pandemic led to theatres closing their doors, she found inspiration for GomBean while working in a coffee hut in Enniscrone. She then developed the show using her Time at the Well bursary at the Hawk’s Well in 2021 and workshopped its content in collaboration with a host of old and young people in the vicinity.

In GomBean, Grace O’Malley is an entrepreneur who is high on debt and low on self-esteem. She’s a former wrestler and when her arch-nemesis Ruby Stephens arrives in town, Grace competes to win back the title she lost at the Community Games in 1994. When a chance at a cash prize comes her way so does a shot at an unforeseen redemption.

Niamh last performed in the Hawk’s Well in Livin’Dred and Nomad Theatre Network’s touring production of Patrick Kavanagh’s Tarry Flynn, directed by Aaron Monaghan. She had much critical acclaim as the co-writer of Looking Deadly, a Show in a Bag initiative with Dublin Fringe in 2017, which enjoyed an all-Ireland tour.

Niamh McGrath, writer and performer of GomBean, says: “I was thrilled to have the support of the Hawk’s Well Theatre during very trying times and a short residency gave me the opportunity to flesh out an idea I've had since watching WWF with my nephews back in the 90's. We spent hours watching fights and pulling the moves and shapes. The fun of wrestling has always stayed me. I was absolutely delighted when Seamus O’Rourke agreed to direct GomBean. He's a gifted director as well as actor and writer.

Seamus O’Rourke, director of GomBean, says: “I was drawn to this play, obviously for its sense of fun, but also because, beneath all the madness, it has a real heart. Niamh McGrath is not only a great actor, but she's one hell of a writer and GomBean is oh so tasty!”

Marie O’Byrne, director of Hawk’s Well Theatre, says: “It gives us the greatest pleasure to see this show come to life. The seeds of this production were sown all the way back in late 2020 when we offered Niamh McGrath an artist bursary over lockdown. Niamh is an incredible artist and to be in a position to support her to bring her writing into a full stage production gives us incredible joy!”

GomBean is a Hawk’s Well Theatre production created with the support of the Bank of Ireland Begin Together Arts Fund.