Promise to #StopKeepingMum: think before you buy a puppy this year

The Irish Dogs Trust have launched their annual ‘A dog is for life, not just for Christmas®’ campaign, which highlights the tragic plight of Mums living in horrendous conditions on Puppy Farms. The charity is asking members of the public to support the #StopKeepingMum campaign by always asking to see Mum if buying a puppy and to help spread this message on social media.

This morning Dogs Trust sent out hundreds of puppy soft toys with the hashtag, StopKeepingMum to members of the public, TDs, Senators, journalists, bloggers and other media personnel symbolising the hundreds of Mums currently forced to live in vile conditions on Irish Puppy Farms.

We received two in the Leitrim Observer: 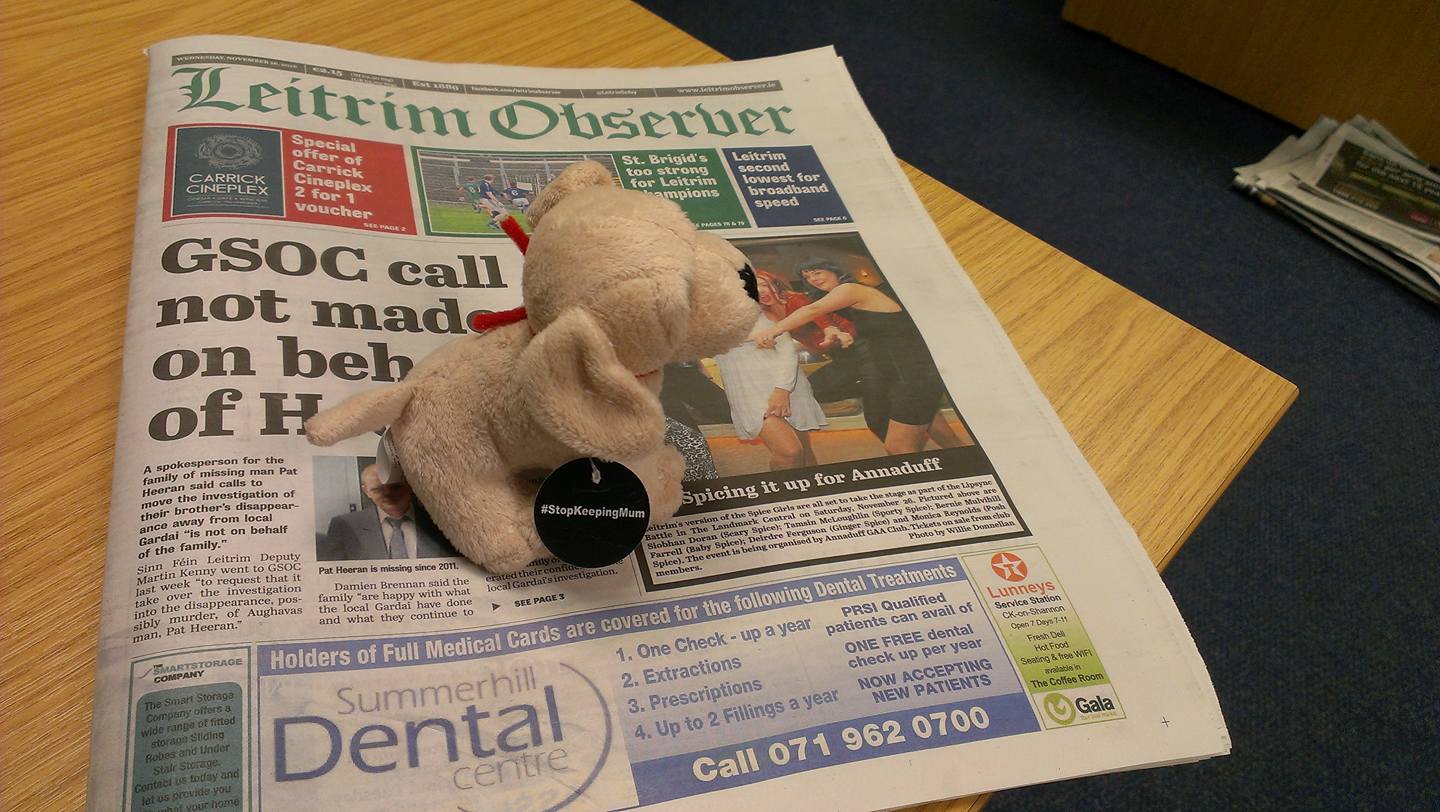 The campaign follows local concerns over 'puppy farms' in Cavan.

Mark Beazley, Dogs Trust Executive Director, explains,"The reality that is seldom talked about and ‘kept mum’ is that these dogs are often locked away in shocking conditions, many times in darkness, without positive human interaction or socialisation and kept as breeding machines, producing litter after litter for years on end and then callously discarded when they get too old"

"We have to highlight what happens behind the distressing Puppy Farming Trade in Ireland, and, in particular shine a light on the appalling injustice to the Mums who are forced to live in these horrific conditions. We are therefore asking members of the public to stop and think about where the puppies that they are buying actually come from and ‘always ask to see the Mum’ and the puppy interacting each other and to always be concerned if excuses are made as to why you cannot.  Seeing mum with her puppy ensures their breeding environment is open for scrutiny".

"November sees the highest number of puppies being advertised online for the Christmas market and we felt we had to highlight to the public where a lot of these puppies you see online actually come from and what atrocious conditions their mums are forced to endure to produce what often end up as unwanted Christmas presents. We want to remind people of our slogan ‘A dog is for life, not just for Christmas’ which was coined over 38 years ago and remains just as relevant today. Very often homes can be quite hectic during the festive season and it may not be the best time for a dog, especially a puppy, to be introduced into a home where the normal routine is disrupted. In the New Year, when the Christmas festivities have died down, we would encourage those ready to make the commitment to consider adopting a dog from your local rescue centre, local pound and Dogs Trust".

What to consider if you want a puppy -

Dogs Trust acknowledges that the internet is an accessible way of purchasing gifts quickly, but the impulse buying of pets and animals poses the enormous risk of attracting many unscrupulous breeders.
1. Always ‘ask to see the Mum’ & the puppy interacting with its mother and be concerned if excuses are made as to why you can’t.
2. Check paperwork and be suspicious if previous owner details have been removed or disguised.
3. If you suspect a puppy has come from a farm don’t buy it. You may be saving a dog but you’ll be fuelling the puppy farm trade to continue this vile trade.
4. Consumers could, unintentionally, end up purchasing a pet online from a puppy farm. Such puppies often have physical and behavioural problems as a result of poor breeding and transportation conditions.
5. Most reputable breeders would not sell their dogs through newspaper adverts, pet shops or superstores, garden centres or internet websites. Anyone who sees an animal for sale in any of these places or anywhere outside their normal breeding environments such as car parks, petrol stations etc. should be suspicious. Newspaper adverts and online websites are of particular concern since unscrupulous breeders or middle men (dealers) are difficult to identify, often posing as members of the public selling ‘puppies from unplanned litters’.
6. Owning a dog is a long-lerm commitment. The average dog lives for 13 years.
7. Dogs aren’t cheap to care for. You should expect to spend around €10,000 over his lifetime depending on the size of the dog.
8. Puppies can be extremely hard work for an owner, particularly if there are young children in the house – do you have enough time to spend with your pup?
9. Dogs don’t come fully trained. They can cause a lot of damage to your possessions through chewing and accidents. How committed are you to training your dog?

Dogs Trust urges people to think carefully about the type of dog they want and to be extremely selective about whom and where they buy it from. It is vital that people undertake as much research as possible to ensure they obtain a healthy legally bred dog and to avoid the unnecessary costs associated with buying at the ‘click of the mouse’.

Dogs Trust would urge all those seeking to buy a puppy/dog online to ensure the website has been approved by the Irish Pet Advertising Advisory Group (IPAAG) of which Dogs Trust are founding members.Further information about IPAAG and Minimum Welfare Standards is available on www.ipaag.ie