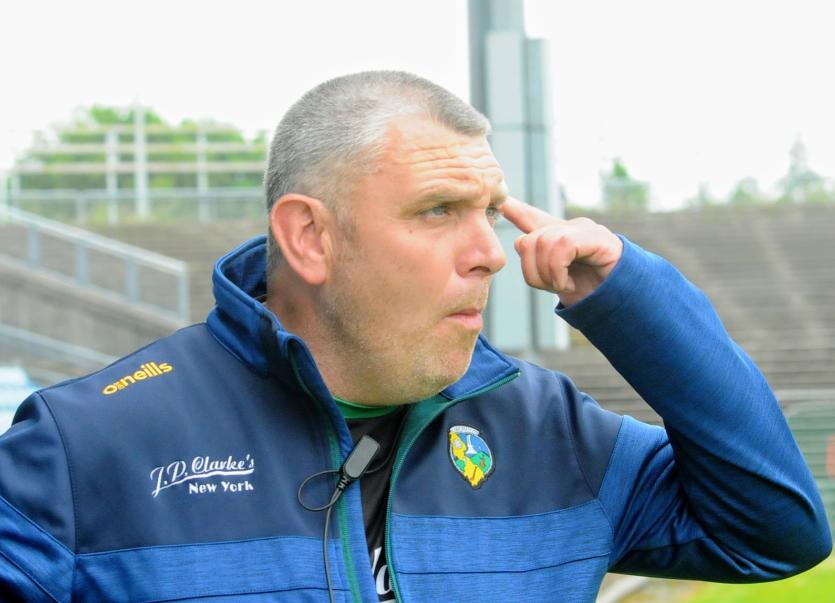 Hard to imagine someone as positive and as driven as Olcan Conway feeling down but there was no doubt that the Leitrim Hurling manager was an untypically subdued man when he chatted to the Leitrim Observer on Saturday in the caverns underneath the enormous stand in Elvery’s Mac Hale Park.

A man who wants to win every game, no matter the odds against it, Conway had to watch his team succumb to a 19 point defeat to Mayo in the opening round of the Nicky Rackard Cup but even then, there was pride in his troops’ efforts and hope for the future.

“The scoreline was a bit like last year,” reckoned Olcan but quickly added “The scoreline definitely does not reflect the game. It is just we coughed up too many chances, too many soft frees, too many individual sort of mistakes and you get punished at this level, they don’t miss a lot, I don’t know how many wides they had but I’d say it wasn’t too many.”

Mayo’s greater economy and surer touch played a huge role in the contest: “We hurled well for the first 20-25 minutes, we stood to them and we won a lot of 50-50 balls and I felt everything was ok but they got a bit of a run on us towards the end of the first half and we didn’t rightly recover.

“We started to drop ball, make mistakes and not secure first time possession and once you do that against a team of the quality of Mayo, you’re going to pay the price. No doubt about it, their first touch was way ahead of ours and when the ball was hitting their hand, it was sticking and when they went down to pick it up, they got it up.

“We were just dropping balls and not securing first time possession, it is something we will have to work on because it is such a short championship now. If we don’t try and get this right, it is going to cost us.”

Yet, even after a heavy defeat, Leitrim know that a win against Donegal would see them into a semi-final but Olcan is the first to admit it is a tall order: “Our situation hasn’t really changed since this morning. If we won today, we were still going to have to win next week to secure qualification so that’s one thing.

“Donegal are a fabulous outfit, I’ve watched them play a few games now, they are very tenacious, they are physical, they are skillful, they have all the attributes now to beat a lot of teams so we will have to prepare accordingly.

“Hopefully, we will have one or two lads back for selection - we were missing quite a few today through injuries and bits and pieces so another six or seven days, hopefully we will have one or two more back and a bit more work done during the week. We’ll go to Donegal on Saturday at home and hopefully, we will get a few people behind us to cheer us on and see if we can give Donegal a bit of a scare.”

Reflecting on the game in Castlebar, Olcan pointed to James McNabola’s shot that was deflected onto the Mayo crossbar as a huge turning point: “We just didn’t create enough chances and didn’t take the chances that we got, we had a great goal chance in the first half when McNabola hit the post unfortunately.

“They went up the field and scored one or two points in a row after it. That was a huge swing in the first half and that would have given us something at halftime to fight for and come out in the second half. It is tough, the lads have had a few knocks this year, League wise and it is tough to keep them motivated but they are a great bunch of men.

“They’ll brush this off tomorrow, they’ll wake up and they’ll say we got back training during the week and lets go again and give it a real good rattle. It is in them, we know there is a big performance in them - we’re just trying to get all our ducks in a row and get it going.”