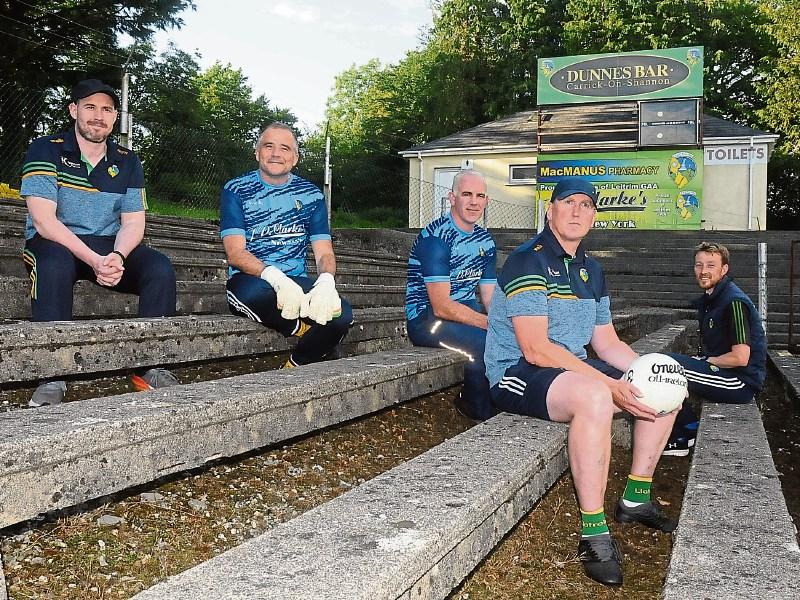 The phrase “To thine old self be true” from Hamlet might seem like a strange reference for a football match but Brendan Guckian wants Leitrim’s U20 footballers to take that message to heart ahead of next Tuesday’s Connacht U20 clash with Roscommon in Dr Hyde Park (7 pm throw-in).

A talented Leitrim squad will do battle with the old enemy but Brendan believes that in seeking to perform at their very best, this Leitrim team could upset the odds against Roscommon in their own backyard. “It is always about the performance and that they are true to themselves,” Brendan told the Observer, “I would have to say from the way they’ve been preparing, they’ve given themselves the best possible chance.

“I’d be very confident that the Leitrim U20s are going to show up in Hyde Park on Tuesday night and they’re going to throw everything they have at Roscommon and they’re really going to represent their county with distinction. They they are going to put in the performance that we are looking for and, after that, results will look after themselves.”

Putting in a good performance is important too for another reason - that this new generation of Leitrim footballers show their family and friends that all their hard work has been worth it: “At that age group, I think it is important, and it is a nice thing for them, that their families can go and watch them represent their county and just that on the day, the people that are there to support them, that they show them what they are capable of and they put in a performance that will reflect the effort they have put in over the last number of weeks.”

The fact that the competition is going ahead is a cause for gratitude according to the former Leitrim Senior team boss: “At the start of the year, the circumstances caused a lot of questions of whether it would go ahead, whether it will be played or not so I think it is great they are going to get a run at the championship and the same with the U17s, that they are going to get a crack at the championship. A good call by the GAA.

“I think it was five or six years ago, Sports Ireland did a survey on the drop off of kids in GAA and the age bracket was 18 to 23 which is where our group falls into so it is absolutely massively important that we keep them engaged, keep them interested, both at club level and county so I am delighted the competition is going ahead.

“Again credit to Connacht Council for moving the game out of Ballyhaunis, moving it to a bigger ground so as to give the opportunity to the lads’ families and some of their close friends to attend the game.”

Motivation will not be lacking for this Leitrim team: “You are playing against your main rivals so I don’t think you need much motivation after that. Roscommon and Leitrim have always gone hell for leather at each other so that is one of the first motivating factors I would imagine for the lads.

“Secondly, these lads love playing football, they love wearing a Leitrim jersey, representing their county, their clubs and their families so I would say they look on it as a great honour to be togging out next Tuesday and to be representing Leitrim and hopefully representing them as best we can.”

Neither does playing on a Tuesday night make any difference to Brendan’s squad: “I think it just goes back to the fact that they are so delighted to be playing in a championship match, it's irrelevant what day of the week it is, what time of time it is at.

“The majority of teams probably train on a Tuesday night anyway so the lads would have a routine for that day. Roscommon and the Hyde is only half an hour up the road from the Centre of Excellence where we usually train so there shouldn't be any major change on a Tuesday evening.”

Roscommon, Brendan says, are strong but Leitrim hope that Senior players Tom Prior and Donal Casey can make a big difference to their challenge: “Roscommon are very strong, they’ve played a couple of challenges. They’ve beaten Meath, they’ve beaten Longford, they’ve beaten Westmeath. Roscommon are a top footballing team but we’re trying to prepare as best we can and what we’re looking for is the lads to perform to the best they can on the day.

“You have Tom Prior playing very well at the moment, great experience for him to be a part of the Senior panel. Donal Casey, who played a great part with Leitrim Seniors last year, curtailed a bit this year from his injury but again, a top class athlete and himself and Tom are going to be a huge addition to us on Thursday.”

There are a few niggles in the camp and one or two players may miss out but Brendan says the County U20 are in a “happy place” and believes a lot of it is down to the work of his backroom team: “A few little niggles and time was tight but then time was tight for every team preparing. We possibly will be without one or two but in general, we’re in a happy place.

“We say about Leitrim maybe not having the resources but there are lots of people within Leitrim that are hugely talented and giving great service. I’m very lucky with the management team I have, they are doing a great job from our physio Ronan O’Rourke to our nutritionist Philip Howard to our S&C coach Enda Lyons, they have put in an awful lot of work to prepare the lads physically as best they can.

“The way things have gone with management teams, you have to surround yourself with the best people and I’d start with Brian Blake, the amount of work and organising he does to make sure that everything is in place for the lads for training.

“You have Kevin Ludlow as a goalkeeping coach, doing a fantastic job and then I’m lucky enough to be surrounded by Jimmy Guckian and Emlyn Mulligan, two lads who have represented their county with distinction. We have Alan Doonan who is after getting an analysis job with Connacht Rugby, he is helping out as well.”

High standards off the field are match by a desire to succeed among the players and it is that final thought that Brendan ends with: “There is huge talent within the group, they are a very engaging group and they’ve set high standards for themselves and I suppose from a management point of view, we just hope that they do themselves justice on the day and I do firmly believe that they will, that they’ll represent themselves and their county very well.”