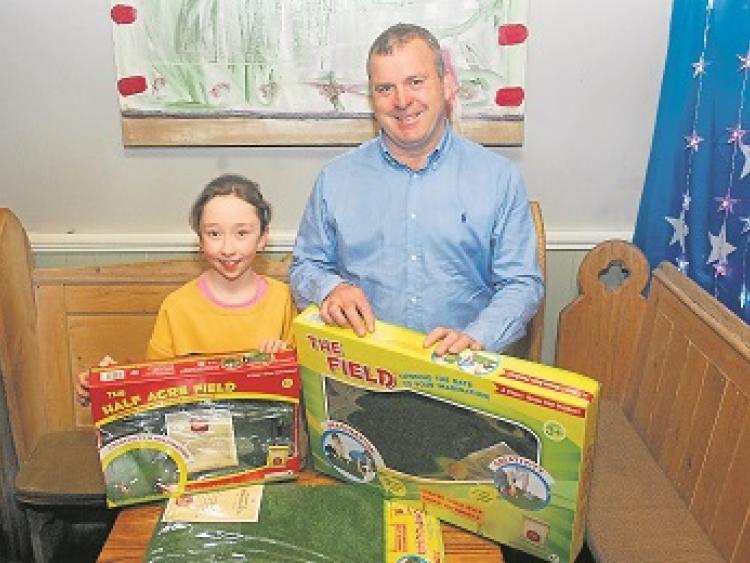 Stella McGirl from Ballinamore who stole the show on the recent Late Late Toy Show pictured with Padraic Cuddy from Field toys.

A simple child’s request ignited the idea for a new business venture for Roscommon man Padraic Cuddy and his family back in 2015!
Three years on Padraic now exports his beloved Field toys internationally, having recently launched the Field toys to the American market, with further expansion and development plans for the Field toys in 2019!
However the company's presence on the Late Late Toy Show 2018 was upstaged by the amazing Stella McGirl from Ballinamore; her ease of personality has won over the hearts of the nation, and according to Padraic “while we love for our Field toys to be centre stage, we were very happy for Stella to shine like the little star she is!”
Padraic the owner of the Field toys was so impressed by Stella, he has arranged with Stella’s mum Clare to make a very special presentation to her in her hometown of Ballinamore and in the McGirl’s bar!
Padraic presented Stella with the Field toys that appeared with her on the Late Late Toy Show (The Original Field Toy, The Compound Field and The Half Acre Field).
The company's story began back in 2015 when Padraic’s then three-year-old son Tommy wanted a toy field just like that of his father’s to graze his many farm animals and his mum Annita wanted a place to store Tommy’s ever-expanding animal and tractor collection!
Padraic a sheep farmer from Roscommon owns and runs a successful synthetic grass business aimed at the domestic and commercial market.
Padraic with a helpful nudge from his wife Annita went to his store located at the back of his house and crafted the very first Field toy, utilising a timber frame and synthetic grass from his business Class Grass Ireland to handcraft a realistic model toy field complete with hedging, lush green pasture and traditional timber gate.
The toy, yet simple in idea and design proved most popular among family and friends, with growing requests for model toy fields and so begun a new business endeavour for Padraig and his family, with The Field’s official launch in September of that year at the National Ploughing Championships!
What started as a cottage business has now grown to that of an international business and an innovation in the toy space! There are now six Field toys to choose from, all reflective of Irish fields and their farming uses!
The expansion and development of the business has been helped in no small part by the media coverage the Field toys have received over the years and with an annual appearance on the Late Late Toy Show since 2015 as the main farming feature, has helped to grow and develop this business on both the national and international stage.
No doubt we will be seeing more from this innovative company.