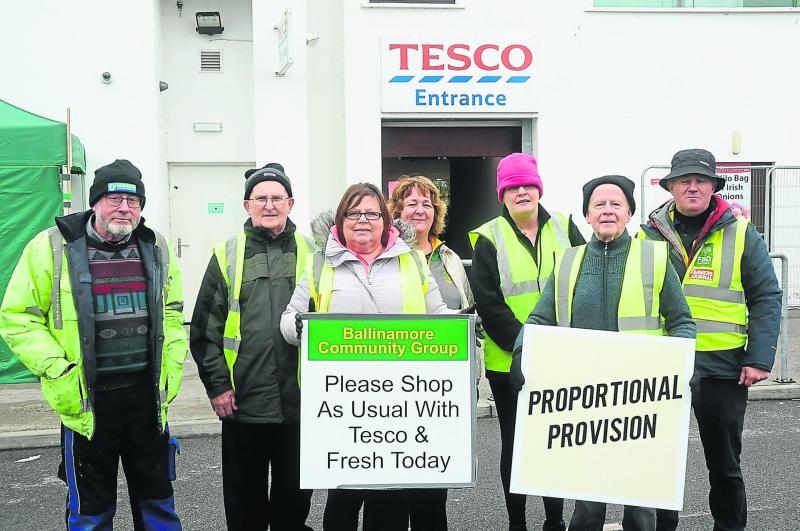 Protesters at The Rock Quarter, Ballinamore

Ballinamore Sean O'Heslin's GAA club, the most successful club in Leitrim GAA history, could be facing a 24 week ban after a complaint was made to the GAA authorities over the club's support for the campaign against a Direct Provision Centre in Ballinamore.

The Leitrim Observer has learned that a letter has been sent to GAA President John Horan, along with the Leitrim GAA County Board and the Connacht GAA Council, urging him to investigate Ballinamore Sean O'Heslin's GAA club's public support for a statement from the Ballinamore Community Group.

The statement, published in last week's Leitrim Observer, condemned the attack on the home of Deputy Martin Kenny and stated it's opposition to “any type of criminality or hatred” but reiterated the group's opposition to the news that up to 130 people could be moving into the Rock Quarter in Ballinamore under the Direct Provision scheme.

In their Facebook post, Ballinamore Sean O'Heslin's commented, “Ballinamore GAA endorses and stands behind the statement issued today by the Ballinamore Community Group.”

However, that statement has led to a member of the Ballinamore club, who wishes to remain anonymous for fear of reprisals, to write to the GAA President John Horan urging him to investigate the matter.

In the letter, the writer points out that involvement in party political questions could lead to a suspension of up to 24 weeks and notes that “This restriction applies to official endorsement or perceived bias on any one side in a political debate.”

The writer also states that they are a lifelong member of the club whose “proudest day as a father came recently when my son ran out to represent our club in the Leitrim County Final only three weeks ago. Alas, it was not to be our day but a proud day it was.”

When contacted by the Leitrim Observer on Tuesday about the letter and any possible ramifications for the club, Ballinamore Sean O'Heslin's Chairman, Michael Quinn informed us the club had no comment to make at this time.

The full-text of the letter sent to GAA President John Horan is as follows:
“Dr Mr Horan,
I am a lifelong member of Ballinamore Sean O’Heslins GAA Club. My proudest day as a father came recently when my son ran out to represent our club in the Leitrim County Final only three weeks ago. Alas, it was not to be our day but a proud day it was.
I have not signed this letter and have decided not to place my identity on this communication in fear of retaliation to my children and my property, when a local elected representative can be attacked in the dead of night what action would be taken against me.
I am truly disgusted at the recent statement Ballinamore Sean O’Heslin’s have issued in relation to the recent acts of anarchy being carried out in Ballinamore.
The constitution of the Association explicitly states “Party political questions shall not be discussed at its meetings and no committee, club, council or representative thereof shall take part, as such, in any party political movement. A penalty of up to twenty-four weeks suspension may be imposed for infringement.”
This restriction applies to official endorsement or perceived bias on any one side in a political debate.
This statement is in clear contempt of the laws of our Association.
The issue at hand here is that of Asylum seekers, which is in itself ironic given the most high profile GAA figure in Leitrim at present is Zak Moradi; he himself arrived in similar circumstances. The Association has been very quick to promote Zak and his story but how quick will you be to investigate the post by Ballinamore Sean O’Heslins.
I urge you to investigate the matter.
Yours,
A concerned member”