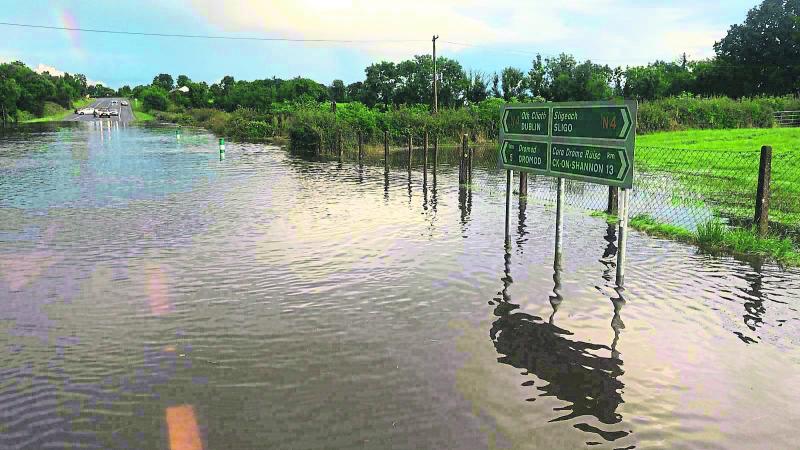 Previous flooding on the N4

Flooding on Leitrim roads has become normal especially this year. After an hour or two of heavy rain motorists can expect to hit floods on roads, some of which can dangerously pull a car off the road.

Cllr Caillian Ellis has called for water tables along the roads to be opened to take water off the roads and help ease flooding.
The Fenagh councillor said after the most recent storm “every road was flooded” and, while he understands some storms will bring floods, he believes that if water tables were opened and cleared it would help ease the situation.

Cllr Enda McGloin supported the motion and noted the Aughnasheelin to Ballinaglera road was badly hit and warned that the situation can turn nasty if frost hits already wet roads.
Sinn Féin Cllr Brendan Barry said “one lad with a shovel would do a lot of work.”

Council engineer Darragh O'Boyle said they did “a huge amount of road works this year” in a short space of time due to Covid restrictions. He did admit that the bigger road projects were a priority and drain clearing and maintenance of signage was put on the back burner. He said drain cuts will be started in January.
He also noted “there is no possible way to deal with flooding at the moment” and that the drains were not built to deal with the extraordinary storms and heavy rain we have experienced.

Cllr Gerry Dolan supported the motion and also noted the need for hedges to be cut back from the roads and for trees that were blown down in the storm to be taken away.
The independent councillor paid tribute to the work of local fire brigades in Leitrim during recent storms. He said during Storm Barra he got stranded without a way home due to fallen trees. He said the local fire brigade were on hand quickly and cleared the roads in an efficient and safe manner.