History talk on killing of Leitrim farmer in 1921 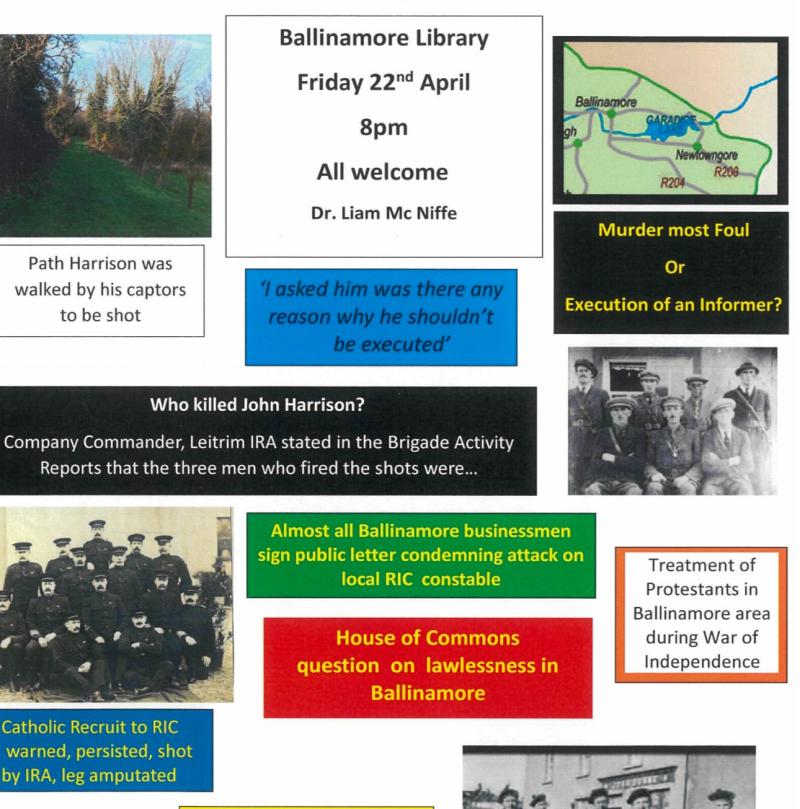 Ballinamore Library will host its first live event, since pre Covid 19 Pandemic on Friday, April 22 at 8pm,.
Dr Liam McNiffe will present his research on the killing of Methodist farmer, John Harrison in April 1921.

John Harrison, a famer lived in Drumreilly, Aughawillan, was married to Jane and they had twelve children.
In October 1920, the IRA imposed a levy on all farmers, to help fund the struggle for independence. Harrison was levied one pound, but for whatever reason, religious, political or cultural, he refused to pay.
The local IRA then attempted to take some of his cattle in lieu of the levy. Despite Harrison shooting at them, they successfully made off with his best cow.

Sometime later, he paid the levy and the cow was returned but he still steadfastly refused to hand over his gun. Six months later in April 1921, Harrison’s mail was intercepted and a letter to the police was discovered, naming the members of the local IRA whom he stated had raided his house earlier.
He was taken out late on the night of 22 April 1921 and executed.
Harrison’s death certificate recorded ‘Foully Murdered’, while the IRA Company Captain, Thomas Smith regarded it as an execution. Apart from these diametrically opposed viewpoints, several specific and general questions arise about the killing of Harrison.

What subsequently happened to his family? Who actually killed him? Was anyone arrested or tried over his death? Was he an informer or spy?
Questions of a more general nature include, how did Protestants in the Ballinamore area fare during the time leading up to Harrison’s death? Was Harrison’s killing sectarian?
This talk will attempt to throw light on some of these questions.
The second phase of the war from March 1920 to July 1921 was by far the most brutal and grim period. The talk will look at the situation in the Ballinamore area during that period, in order to understand the background to Harrison’s killing.

Leitrim's Easter Commemoration to be held next Sunday

On Sunday, April 17 Leitrim’s Annual Easter Commemoration will take place in Aughnasheelin at the graves of three of the heroes of Selton Hill, Séamus Wrynn and the two John Joe O’Reillys.