Heifer stealing and murder, the crimes of Leitrim’s Victorian villains come to light 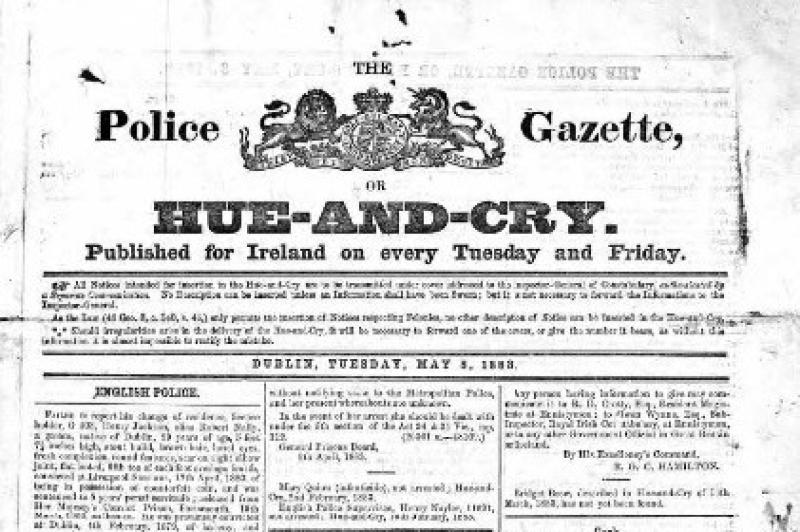 The number of accounts of murder in Leitrim found in the Hue and Cry stand at six.

Assaults, embezzlement, absconding, heifer stealing and murder are just some of the crimes of Leitrim’s Victorian Villians. These crimes have come to light following the publication of 19th-century police files by Ancestry.
This was an era in Ireland when murders were seven times more likely and theft was rife.
The collection reveals that assault was the most common crime in Ireland with 28,353 cases reported in the 32-year period.
The number of accounts of murder in Leitrim found in the Hue and Cry stand at six, relatively low in comparison to the rest of the country. Breaking of license conditions (28,092 incidences) and theft (23,345 incidences) were also common crimes in Ireland at the time.
Many of these crimes were also connected to heightened periods of civil unrest that defined them, such as the Land War and its related tensions in rural Ireland in the final three decades of the 19th Century.
The collection allows members to examine their family and local history in a different light as it may be found that your great ancestor may have lived a life of crime, or rather may have been a victim of one. The records include the names, addresses and descriptions of Leitrim residents wanted for and convicted of various crimes, as well as their victims.

Murder in Carrick-on-Shannon
A description of John Mulvey, native of Drumliffin, is placed in the Hue and Cry. Mulvey is accused of murdering Michael Cox on 10 July 1885.
He is said to have violently assaulted Cox by striking him on the head with a spade and thereby causing his death.
The 65-year-old is described as much wrinkled about the eyes, which are small and blue, long nose, long red face and of medium make.
He is 5 feet 6 inches high and on the day in question wore a dark tweed coat, cord trousers and a tweed vest.
It is thought he will attempt to emigrate to America or England for some time.

Assault in Kiltoghart (sic)
Patrick Turbet, a native of Lisdrumfarna, is charged with seriously assaulting Michael Rowley on 6 December 1870.
He is accused of striking Towley on the head with a log, thus putting his life in danger.
Turbet is described as having two prominent upper front teeth, gray eyes and a slight cocked nose. He is about 50-years-old with very gray hair. He is said to have been wearing a round hat, frieze coat and cord trousers, although his clothing may now have changed.

Heifer theft in Moneyduff
A heifer was stolen from the property of Patrick McDermott in the townland of Moneyduff, parish of Drumlease, barony of Dromshair (sic) on the night of the 2 December 1862.
The heifer is described as two and a half years old, spotted white and brown with cocked horns, turned to the point. She is of Irish and Scotch breed and is with calf.
McDermott is offering a reward of £3 for the heifer’s recovery and prosecution of the thief leading to conviction.

Robbery at Drumahaire (sic)
Four men, whose names and native places are unknown, are charged with forcibly entering the dwelling-house of Patrick McMorrow of Fahy on 4 May 1885.
The men threatened the inmates of the house and stole a gun. All four men are described in the Hue and Cry calling for their identification and arrest.
The gun was aso described in the publication. It was a double-barrelled muzzle laoder, with Griffith written on lock, small piece broken off toe-plate, cut-mark on small of butt and small piece broken off one of the hammers. It is valued at £2.

Wanted criminal in Ballinamore
Michael Sunters, a native of Derrinkeher (Roycroft) is wanted by police.
He was found in an outhouse belonging to Patrick Guckian in Oughteragh on the night of the 8 April 1891 armed with a loaded gun with intent to commit a felony.
Sunters is described as half witted, gray or blue eyes, regular nose with a fresh complexion and a small round face.
He is of medium make and is said to be 5 feet 6 inches high. He is a farm servant and may be working as such in Fermanagh. A warrant has been issued for his arrest.

Missing man from Dromod
James Wallace of Dromod, left his home in the parish of Annaduff to go to Killashee, Longford on the 14 January 1874. He has not been heard from since.