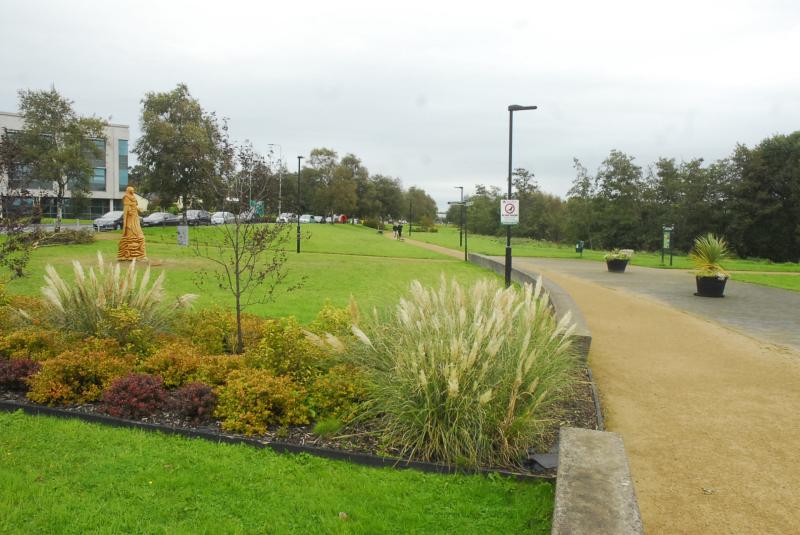 After 39 years Dromod has been dethroned as Leitrim’s tidiest town with the honour this year going to Carrick-on-Shannon by the narrowest of margins and the county town has now been tipped to go even better next year and win a national award.

The results of the 60th annual SuperValu Tidy Towns competition were announced earlier this week with Carrick-on-Shannon retaining its gold medal and increasing its points tally from last year by five to be named as Leitrim’s tidiest town.

In total 17 towns and villages in Leitrim entered the competition with all of them registering an increase on last year’s points tally.

Reacting to the news of their success in this year’s competition Paschal McGuire, Chairperson of Carrick-on-Shannon Tidy Towns Committee said Carrick-on-Shannon’s total of 329 marks was “A great credit to all the volunteers” who have offered assistance over the past 12 months.

Gold, Silver and Bronze Medals were awarded for entrants with scores that fall within a set range from the winning score.

Those sentiments were echoed by Cllr Finola Armstrong-McGuire who said, “We are absolutely thrilled, especially to see the marks that have been gained. Marks are very difficult to gain and we gained five marks. 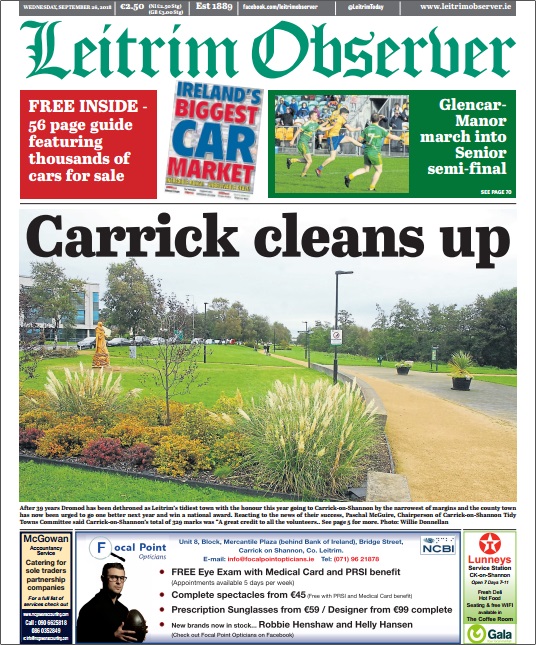 Cllr Amstrong-McGuire payed tribute to the local volunteers who helped the committee throughout the year saying, “Following the results last year we reached out to a lot of people,” adding, “People came from Avantcard, the GAA, Cortober Resident’s Association while the the local Scouts and Foroige groups offered to help in any way they could.

“Thanks to all of them. It is part of the ethos of the competition that all the community is involved and we have punched so highly.”

While delighted with the county title, Paschal insisted the Carrick-on-Shannon Tidy Towns committee is always on the lookout for new volunteers.

“We never stop looking for new people he insisted. We absolutely want people who can even only do one night. If people can step up to do a few hours that’s all we need. We absolutely appreciate any bit of help.”

He also thanked everyone who responded to the callout for help with tasks such as painting, sweeping and hanging flower baskets saying, “There was a great response.”

Chairman of the Dromod Tidy Towns Committee, TP Cox was magnanimous when giving his reaction to the results that saw Dromod fall just short of being named Leitrim’s tidiest town for a 40th successive year saying, “All good things must come to an end.”

TP was quick to pay tribute to and congratulate the Carrick-on-Shannon committee saying, “I would like to wish Carrick-on-Shannon all the best, fair play to them. I hope they go on and win an All-Ireland which is within their grasps.”

TP reiterated the sentiments expressed in Carrick-on-Shannon as he called for more volunteers to help out saying, “It is hard to get volunteers and we are always on the lookout.

“Financially it is a loss to lose the county title and the silver medal, two years ago we had a gold medal.”

Paying tribute to Carrick-on-Shannon once again TP said, “The ball is at Carrick’s feet and they are coming strong. They are well worth their win.”

Speaking after Monday’s awards ceremony in The Helix Minister for Rural and Community Development Michael Ring, T.D congratulated overall winners, Listowell and announced a special allocation of €1.4 million to support the work of individual Tidy Towns Committees around the country in order to mark the 60th anniversary of the event.

“On the occasion of the 60th anniversary of the competition, I am making available €1.4 million from the Government in order to directly support the Tidy Towns groups that bring out the best in our towns and villages. I have no doubt that towns and villages across the country will benefit hugely from this investment. Wherever you have active Tidy Towns committees, it gives the place a real boost and creates the environment for tourism.”

Carrick-on-Shannon county and Gold medal winners in the 2018 tidy towns competition. Congratulations to all the groups and volunteers around the county on their hard work to enhance our communities, towns and villages. pic.twitter.com/irHJjEjgHs

Gold medal award winner for the 3rd time in a row. pic.twitter.com/1opyrs3H8j