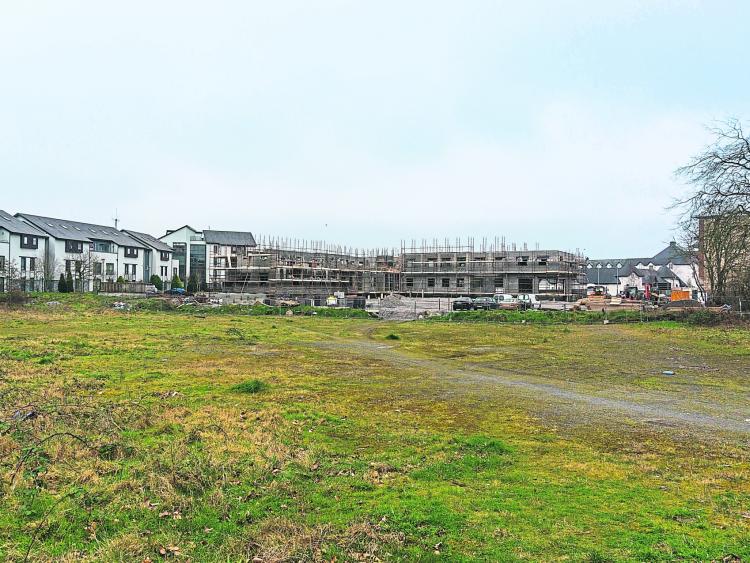 Flynn's Field in the centre of Carrick-on-Shannon, to the rear of Main Street and Bridge Street where a proposed new car park is to be located under the plan

Work on the construction of the new Flynn's Field car park in Carrick-on-Shannon is expected to commence before the end of this month and should be completed by the end of May.

The contract for the construction of the car park is due to be signed in the next week.

The matter was raised at last Monday's meeting of the local municipal district by Cathaoirleach, Cllr Finola Armstrong-McGuire who stressed the importance of highlighting the availability of the car park to the public from day one.

She welcomed the dates given in the reply to her motion and called for two access points from Bridge Street to the car park.
Cllr Armstrong-McGuire also asked if a one-way system would be introduced onto the N4 to allow for the extra traffic in that area.

She clarified that she meant one way in at Cryan's Hotel and one way out at the Social Welfare offices. She also said they should look at a one way in and out system at Shannon Lodge.

She said it was time to start thinking about this and initiate a conversation among the public.

Darragh O'Boyle, District Engineer, said they are looking at various options and are in discussions with the TII in relation to the N4. He said a one way system around the Landmark Hotel has to be looked at as well as no right turn off the N4 heading towards Sligo.

Mr O'Boyle said that any roads onto the N4 may be left turn only but that will have to be looked at by the TII.

Cllr Des Guckian said there is plenty of space for a two way system at the new medical centre while Cllr Sean McGowan said the issue needs discussion with all stakeholders.

He agreed with the suggestion regarding Shannon Lodge and said the residents there have to have their privacy as well.