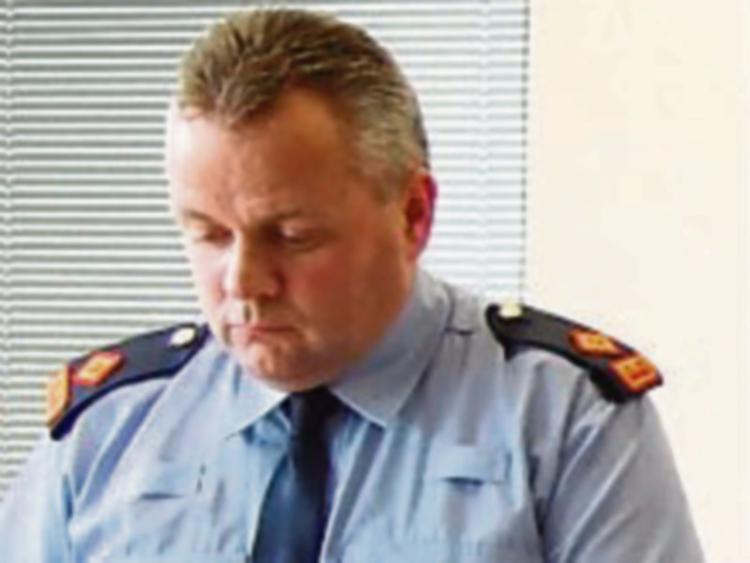 Before the business of the court got underway, Noel Farrell, County Leitrim State Solicitor, spoke about Supt English who he described as having had a stellar career in An Garda Síochána.

Addressing Judge Kevin Kilrane, Mr Farrell said Kevin English “quickly achieved advancement in rank and to get to the highest level is no mean feat and obviously well earned.”

Mr Farrell said his involvement with him was largely in the prosecutorial side and he was always impressed by Supt English's attention to detail and also his knowledge of the law and its practice through the courts.

“Supt English was well known to yourself Judge all down the years and I recall in the distant past an odd ferocious battle in the district court. These weren't skirmishes, these were fought tooth and nail but I'm glad to say there was no permanent scarring on either individual and obviously you have a great relationship now in the courts.”

Mr Farrell noted Kevin English is an uncle of Olympic athlete Mark English and he used the family's athletic trait to good effect over the years.

“I know that he brought that athleticism to great advantage in pursuing people who weren't too happy to meet him at 2 o'clock in the morning when he was fit to outrun them,” he remarked.

Peter Collins, on behalf of the solicitors in Leitrim, Sligo and Roscommon, described Supt English as a man who knew his law and was exceptional on procedure.

“Many a poor inexperienced solicitor who thought he would walk in here and ignore the procedure and go straight to the justice would be brought back to earth fairly rapidly,” he said.

Mr Collins added that Supt English has spent most of his career in this general area and when he came back to Leitrim as a Superintendent, the people saw the benefits of having a resident Superintendent who cared for the area.

“There was a belief in feet on the street, patrolling the town all hours of the day and night, particularly with the unfortunate reputation the town had begun to get with stags in particular.

“The Superintendent did all in his power to try to diffuse the situation and only in cases where they could not be diffused were prosecutions brought fairly, speedily and thoroughly,” Mr Collins said.

He also spoke of Supt English's involvement in the CCTV cameras initiative around the town.
“He was an extraordinary supporter of that and the man behind it, Joe Dolan, would say that without the Superintendent's immense efforts it may not have taken place. He will be missed and the community owes him a deep debt of gratitude,” he concluded.

Geraldine McWeeney, on behalf of the Courts Service in Carrick-on-Shannon, said she would like to be associated with all the comments. She thanked Supt for all his help and courtesy over the years and wished him a long and happy retirement.

Inspector Carla Curry, who is now acting Superintendent, on behalf of An Garda Síochána, paid tribute to his commitment and dedication to the organisation and the community of Leitrim as well as the positive impact he's had on policing in his time here.

Judge Kilrane said Supt English was on the Force for some 38 years and during that time he rose rapidly from his start to attain the rank of sergeant, then afterwards Inspector and then Superintendent.

“I was hoping that my battles as a solicitor with Supt English when he was prosecuting the drunk driving cases and all the rest of it wouldn't be brought up but now that it is I have to acknowledge we had a very combative relationship and we won some and we lost some and I'd like to think in the end it was probably a draw,” said Judge Kilrane.

He said the area that Supt English covers is a very significant one and the principal area of public order difficulty was, unfortunately, the town of Carrick-on-Shannon.

He described Carrick-on-Shannon as a wonderful town with wonderful people, a very touristic and beautiful town with all the amenities that go with it. It has, over the years, attracted a huge amount of parties from all over the country and abroad as well.

Unfortunately, some of those parties got a little too lively, he said, and ended up at special sittings of the District Court in Sligo on Friday and Saturday nights.

“Fortunately or unfortunately, that has now gone in the short term. When it returns, as I hope it will return, I hope that it returns perhaps with a little bit more understanding of the local people and that they have to sleep in their beds at night,” he said.

Judge Kilrane said Supt English through his management and with the support of the Gardai ensured there was a constant presence.

“There were feet on the street and there was a garda van constantly patrolling the town and there was no substitute for that,” he said.

Judge Kilrane remarked that “90% of the commentary was good but there was unfortunately some downside where serious assaults took place and we know all too well about the single punch syndrome where in particular young men were involved in serious fracas involving injury and sometimes very serious injury.”

He reiterated what Mr Collins said about the CCTV initiative in the town and described it as a particularly important development in Carrick-on-Shannon by Joe Dolan of The Bush Hotel and the other participants involved. He said the scheme pushed ahead and is a fantastic success.

“There are cameras at vital areas in Carrick-on-Shannon and they are a great help to everyone in controlling the town, allowing people to enjoy themselves but to detect criminality and in other cases to establish the innocence of people against whom false claims could be made against them. The cameras are excellent to get to the truth of the matter.”

Judge Kilrane added that Carrick-on-Shannon is particularly suited to the entire camera phenomenon as it is an essential crossing point of the Shannon and the camera system is “particularly effective in detecting people who, in effect, need to be detected.”

He wished Supt English well in his retirement and said he hopes he involves himself in some form of community or other development.

“I believe you can bring a lot to the table. You have an awful lot to give,” he said and expressed his good wishes to Supt English, his wife and son.

Supt English thanked all the speakers for their kind words and said he was humbled by them.

“I have nearly 38 years done and I've 10 years done in the rank of Superintendent and I've enjoyed my time,” he said.

“A lot of my time has been spent over the years prosecuting cases on behalf of the DPP and I'm charged with a huge responsibility in that we must present our cases and the facts as they are and avoid the temptation to embellish those facts to suit any particular case and that's one responsibility we always have,” he said.

Speaking to Judge Kilrane he said they had some wonderful times in court in former days.

“I would like to think, rather than battles, it was a learning experience because I do think the courtroom is one of the best centres of learning any police officer can get because of the huge volume of legal experience that there is here,” he said.

He acknowledged Judge Kilrane and the other two resident judges in the area, Judge Conal Gibbons and Judge James Faughnan.

He thanked Judge Kilrane in particular for “the support and understanding that you consistently display both to me and to the prosecutors who have followed me.”

Superintendent are statutory, he always remains conscious that it is a balancing of people's rights, one of understanding and adopting a common sense approach.

He thanked State Solicitor, Mr Farrell for his support and everyone of the solicitors in the district who he said have been hugely supportive of the work An Garda Síochána does.

Supt English also acknowledged the media, represented in court by the Leitrim Observer, and said it plays a huge part in the administration of justice.

“I want to thank you from the Garda perspective for the very fair and impartial manner in which you have reported on cases and informed the people as to what happens in here. You've also provided an invaluable service to us along with the local radio stations Ocean and Shannonside in getting out very important messages whether that is for witnesses or in relation to important road safety messages and I just want to thank you for that service you have given and discharged in a very respectful way.”

He also acknowledged the work of the court staff and said that while the faces have changed over the years, the level of support and understanding and cooperation has never changed.

He acknowledged all the very kind words attributing success to him.
“All those successes I accept graciously but I'm very mindful they are achieved by a collective effort by all the people I work with in the station in Carrick-on-Shannon, the men and women who are operating on the frontline,” he said, and remarked how dangerous that can be as evidenced by the recent tragic and senseless killing of Detective Garda Colm Horkan.

He also established a court presenters office and he paid tribute to Sgt Michael Gallagher and others who he said have contributed significantly to the overall running of justice in the area.

Supt English said everyone is asking him what he's going to do now.
He said, in the short term, he is simply looking forward to spending time with his family, without a mobile phone.

He concluded by wishing continued success to Inspector Curry.