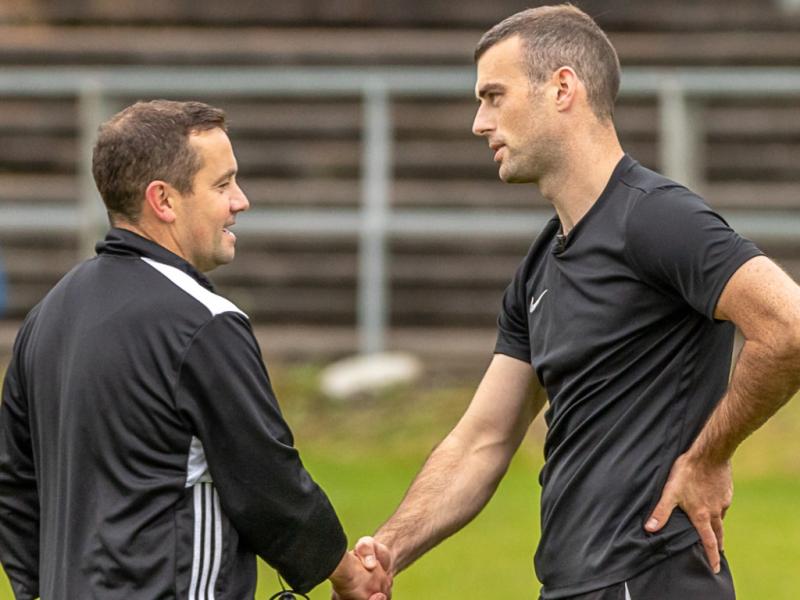 We did it! St Joseph's manager Ray McBrien and selector Brian Mulvey congratulate each other after victory in Sunday's final. Picture: Stefan Hoare

Overseeing his St Joseph's side to championship success isn't a new experience for Ray McBrien but the look of satisfaction on his face after last Sunday's final in Avantcard Pairc Sean MacDiarmada suggests it is one he is very much enjoying.

The experience of those previous finals, both on good days and bad were crucial with Ray acknowledging: “a bit of experience stood to us in the last 10 minutes and thankfully we got over the line.”

Read Also: Gallery | Have a look at the images from St Joseph's victory over Glencar/Manorhamilton

The closing stages saw Glencar/Manor lay siege to the St Joseph's goal with Ray insisting keeping Manor without a goal was crucial.

“They really threw everything at us but we said once we didn't concede a goal we were always going to win the game, they weren't going to pull it back on points alone.”

Ray was quick to acknowledge the threat posed by Manor's attack, meaning his defence had to be at its best.

“They have class players up front - Muireann, Ailbhe Clancy and Leah Fox are all serious players. They are going to get chances and it is just how you defend it and thankfully we did defend it fairly well and just got over the line.

“It's a great achievement and people might say it is only Leitrim football but senior championships are still hard won in Leitrim and the girls put in a serious effort all year.

“We couldn't be happier, it's three in a row and we will see what happens next year.”

Referring to the standard on display Ray insisted there were plenty of quality inter-county footballer in action and urged others from clubs around the county to tog out for Leitrim in the coming year.

That was a point that was also touched upon by St Joseph's midfielder Aine Heslin after the game when she said: “When you take our team and Manorhamilton's team into consideration we have a lot of minor girls there and that is great for county level and we have under 16s as well playing today, as do Manor.

“At senior level we had a few girls out there, we put into the county set-up and Manor did the exact same and pushed on for county.

“We are two clubs that were definitely to the fore in getting Leitrim ladies out there this year so hopefully they'll push all those players out again for 2020 and bring a few more with them.

Aine added the quality of players coming through the ranks suggests this rivalry could be renewed next year saying: “We have some serious talent coming up as well just like Manorhamilton so we're not going anywhere anytime soon!”