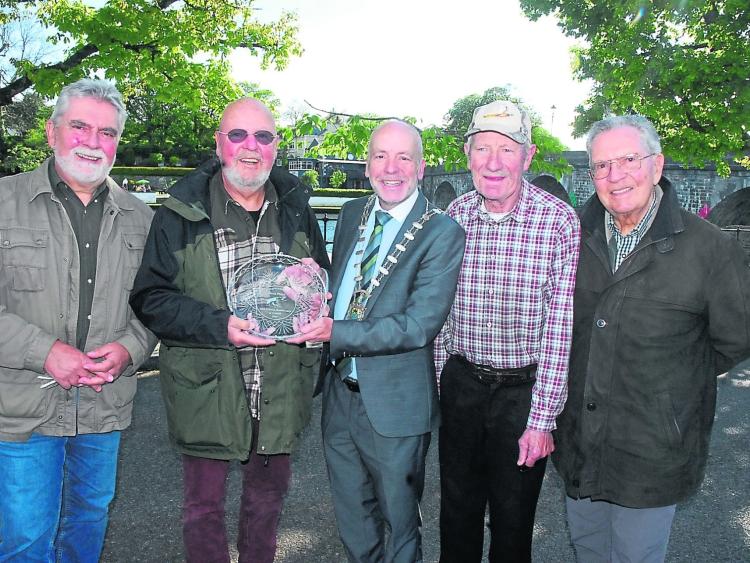 Mr Hans Peter Chilian was presented with a specially engraved Leitrim Chrystal memento to mark his 50th year fishing in Ireland by Cllr. Sean McGowan, Chairman, Leitrim Co. Council on the 11th May 2019 on the banks of the Shannon in Carrick-on-Shannon in the company of some his fellow Bavarian anglers.

Mr Hans Peter Chilian, from Fussen, in Ostallgau, Bavaria has fished annually in Ireland for the last 50 years. In some years, he has visited twice and most times he was accompanied by angling enthusiasts from his home area. On occasions, he even persuaded his wife Andrea to visit for the joys of fishing in Ireland. His enthusiasm for Ireland and matters Irish is well known among his compatriots.

Hans Peter fishes mainly in the lakes and rivers of Leitrim, Cavan-Monaghan, Longford and North Roscommon. He has developed an interest in Irish music and culture over the years and celebrates Irish occasions in his home town, particularly on St Patrick’s Day. There is nothing he likes better than to listen to Shannonside and Radio na Gaeltacha during his stays in Ireland.

Irish lakes and rivers are excellent for coarse angling, he believes. He understands and supports the need for investment and conservation of our fishing resources. Fishermen, he said, appreciate this and to enjoy angling does not mean taking all the fish out of the water. Most true anglers, he said, return their catches so that there may be another day as this is the essence of the sport. He pays tribute the great work done by Irish tourism, the Fishery bodies and angling interests in maintaining and encouraging Irish fishing for both Irish and Visiting anglers.

In particular, in the Drumshanbo area, he remembers the great work done by the late James McGuire and his wife Mrs Myra McGuire along the late Joseph Mooney in promoting angling. He said in the earlier years he cherishes memories of his visits to the Bridge Bar, Drumshanbo then run by the great conversationalist Gus Earley, who to Han Peter’s surprise, had undertaken part of his 3rd level education in Europe in the 1930’s.

Hans Peter commented that oftentimes when fishing, he rarely meets another person. It is wonderful that Ireland still has many unspoilt lakes and rivers where the enthusiast may escape from the hustle and bustle of modern life. He said, most unusually he always gets a “suntan” no matter what the weather is whilst he fishes. This together with the hospitality and kindness of Irish people always attracted him back to Ireland. Over the years, Hans Peter has made many friendships with the people he encountered.

It could be said that Hans Peter is a visitor who, in many ways, has become “more Irish than the Irish themselves.”