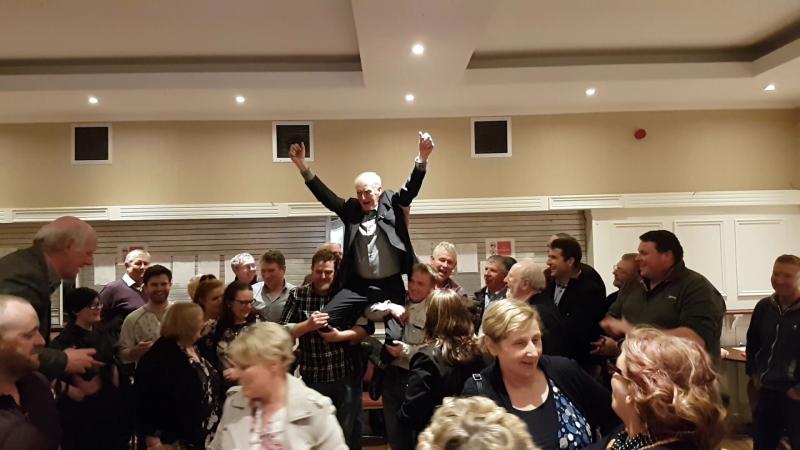 There was one saying we heard time and time again this election and that was "Gerry Dolan is hard bet" and it rang through as the Independent Councillor won the last seat in the Ballinamore area after a tight recount on Sunday, May 26.

The returning councillor was buzzing when he was finally elected just before 8pm on Sunday after a grueling recount that came down to just six votes between him and Sinn Féin’s Pat Gilhooley.

“I fought back” he laughed and "I won by the skin of me teeth" he said adding that he was “pretty confident of transfers from the beginning.”

28 years a councillor, time and time again Gerry Dolan has pulled through showing his popularity among the rural and agricultural voters. The man who describes himself as “almost a vet”, farmer, bone setter, lorry driver and essentially man of the people told this paper he could account for every vote. “I was down five votes in the first count from last time, four of those people were on holidays.” He was proud of the numbers he held in Aughnasheelin and grew in Newtowngore.

He complimented Pat Gilhooley on his strong vote as a first time candidate, “I know him well, I would have wished him well if he won.”

Dolan said he did not call for a re-count as “I have 100% trust in the council staff, I know them well.” In the end there was just six votes between them.

Dolan said during his new term he will champion positive changes in health and agriculture for the people of Leitrim and hopes to over turn the issues with one off housing and the spruce forestry in the county.

51 years a pioneer, he said he would celebrate this win with family and friends before getting back to farming and doing his job as a councillor.

Read: Disappointed Pat Gilhooley says he "lost the fight" for the final seat in the Ballinamore area