LEITRIM: Looking back at what made the news in April 2020 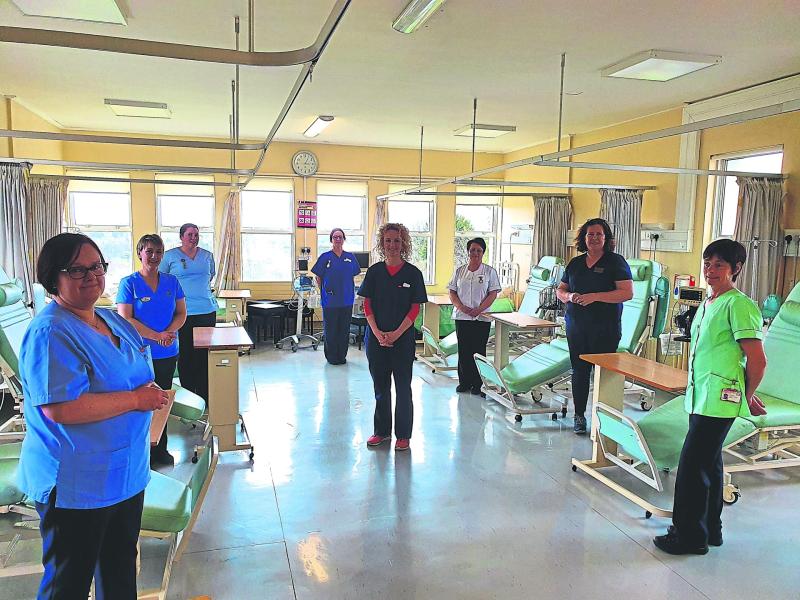 A sign of the times. Staff at Our Lady's Hospital, Manorhamilton launched virtual clinics as part of Covid-19 preparations.

Bringing home the impact of Covid County Leitrim's testing centre prepared to open its doors in April.
While the number of confirmed cases of Covid-19 in County Leitrim was low at the start of the month, with just six recorded instances of the virus, the lockdown remained firmly in force.
Streets were deserted. People did not venture beyond a 2km distance of their home except for exceptional reasons and many people found themselves out of work.
This month we also saw the introduction of the Pandemic Unemployment Payment, a special support aimed at helping those who found themselves out of work as a result of the lockdown. Little did people realise that some would find themselves remaining on this payment for the remainder of 2020.
It was in April that we first started to see some engaging in acts of gross stupidity. Gardai in Carrick-on-Shannon investigated two complaints of a number of a number of youths engaged in the deliberate acts of coughing at members of the public and at the same time shouting “coronavirus”.
In non-Covid related news tributes were paid following the loss of two beloved Leitrim performers. Acclaimed Leitrim musician, Ben Lennon and singer, musical director and broadcaster Mary McPartlan.
Ben Lennon was born in Kiltyclogher, Co Leitrim in 1928, Ben began learning music with Sean O’Donoghue and also learned from Fermanagh fiddlers John Timoney and John Gordon and from piper, flute-player and fiddler John McGovern. A tailor by trade, like his father, Ben studied in London before working in Limerick, Cork and Donegal but it was traditional Irish music that held his heart. In 2011, Ben was awarded the TG4 Gradam Ceoil Lifetime Achievement Award for his love and dedication to his craft.
President Michael D Higgins led tributes to the late Leitrim folk singer, musical director and broadcaster, Mary McPartlan. Mary, was born in Drumkeerin and was described as “one of Ireland’s great folk singers” by President Higgins, he said she “leaves a legacy of achievement for the arts that will endure”.
The community of Drumshanbo was left reeling following the death of a five-year-old boy in an accident on his family's farm. Conor (Joseph) Campbell passed away on Sunday, April 5 after he sustained injuries when he fell from a trailer at the family farm near Tulsk, Co Roscommon.
Leitrim Fire Services were kept busy in April after they were called out to deal with two serious fires only days apart. Three fire brigade units from Leitrim Fire Service (Ballinamore, Drumshanbo and Mohill) attended a forest fire at Stralongford, Ballinamore for a number of hours on Monday, April 20. Dramatic footage was taken of the fire which occurred on multiple fronts and the smoke could be seen by communities 40km away. This followed another fire which broke out in the Drumkeerin area just days before.
But there was some welcome news this month as communities rallied to help those impacted most by Covid-19.
Tributes were paid to the GAA, to gardai and Leitrim County Council as well as a wealth of other volunteers and community groups who all stepped forward delivering meals, do messages and check in on the elderly and isolated.