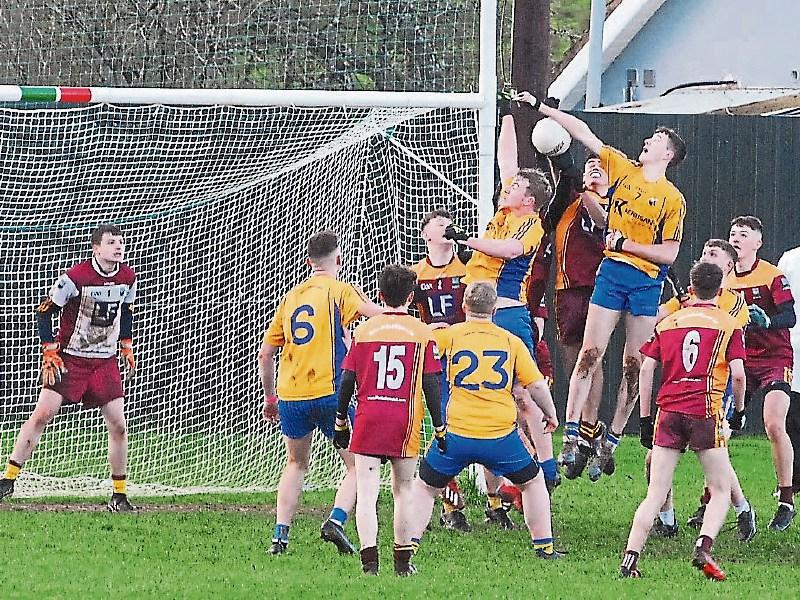 Hard to know what cliche to go with for Annaduff’s U20 C Final victory over Glencar Manorhamilton last Saturday in Kiltubrid for this truly was a game of two halves and goals did indeed win the game for the Annaduff men!

Two goals in each half were absolutely huge scores for Annaduff, first keeping them in touch against a Glencar Manorhamilton who were vastly superior side in the first half before turning the game on its head in the second half with two goals in the first ten minutes.

Once that fourth goal went in, Annaduff were a transformed team and the only mystery was that they didn’t go on to score a comfortable victory. But that reckoned without the old water break turn-around as the Manor lads steadied themselves and fought back but were unable to get the scores they needed.

Crucial to Glencar Manor’s chances was an injury sustained by Barry McNulty, the County Minor head and shoulders above everyone in the first half, but an injured shoulder that left him holding his arm in by his side for almost the final 20 minutes robbed Manor of their one real scoring threat.

Barry McNulty opened the scoring with a lovely point on five minutes but a minute later, Annaduff plundered their first goal when Niall Quigley and Michael Murray broke dangerously, finding Ultan Kelly who fisted the ball to the net from close range.

Glencar Manor’s response was impressive with three McNulty points in the next three minutes, the third seeing him win the kickout, break through a tackle and firing over from distance.

But Manor were rocked right before the first water break when another great break saw Michael Murray fire low to the net to give Annaduff a two point lead. But that lead didn’t last long with McNulty firing over two fine points to tie the scores.

Dylan Gilligan scored a great point, the first player not named McNulty to score for Glencar Manor. McNulty resumed normal business from a free and then set up Michael O’Brien’s goal on 25 minutes, breaking free of tackles and soloing in to set up his teammate for a palmed goal.

Annaduff’s first point of the half came from Jack Hughes and the Annaduff man saw a low shot well saved by keeper Shay Gurn. Annaduff threatened again through Hughes but Gurn saved the shot again with Tarach O’Snodaigh clearing the follow-up.

Annaduff kept looking for a goal but as the game ticked into added time, Manor broke with Dylan McDermott scoring a fine point to leave Glencar Manor 1-9 to 2-1 ahead at the break, a lead extended when halftime sub Jack Faulkner fired over inside the first minutes.

But Annaduff turned the game on its head, this time Jack Hughes fielding the ball in midfield before soloing through to fire the ball to the net on two minutes. Six minutes later, another turnover saw the ball fed into Liam Taylor who turned to fire ball low to the net.

That left the teams level and when Jason Ward fired over a free, Annaduff were back in front. Both sides then had missed chances with Jack Faulkner seeing a shot hit the post but just before the water break, Taylor fired over after more good work from Quigley.

A clearly injured Barry McNulty fired over on 48 minutes but it was to be Glencar Manor’s last score as they dropped two frees short and wide and Annaduff made them pay when Ward fired over a free and from that kickout, Jack Hughes fired over the bar with eight minutes left.

Glencar Manor staged a late battle for scores with McNulty & Tarach O’Snodaigh both seeing chances go inches wides but their desire to go for goals backfired as they turned up the chance to get scores that might have got them back into the game.