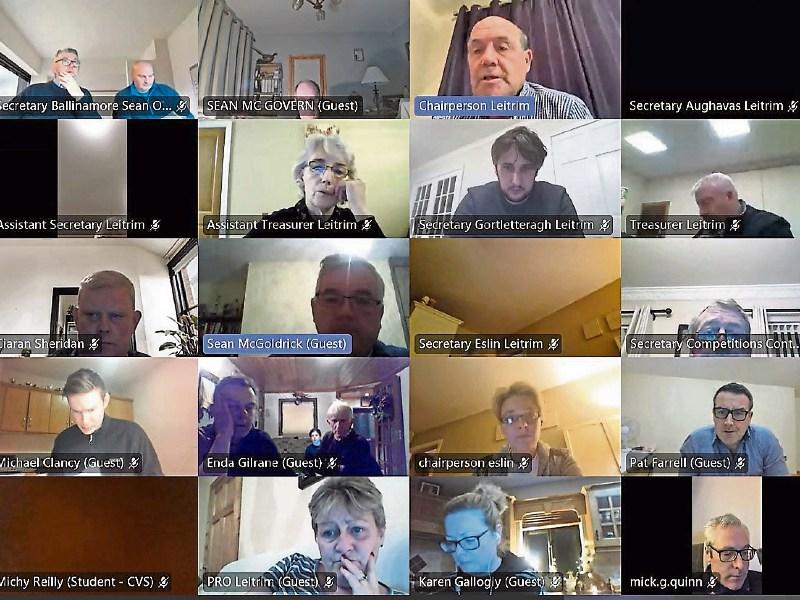 An amended proposal to reduce the impact of first team players lining out with club’s second string teams in the Intermediate and Junior A Club Championships was passed after a protracted debate at last Monday’s Leitrim GAA County Board Convention.

With technical difficulties relating to voting and feedback problems afflicting the online debate, the only motion debated and voted on by the Convention was passed with an amendment that means the new provisions would only apply fully to second teams competing in the Intermediate and Junior A grades.

The motion, proposed by the County Board’s management committee, sought that the first 18 players who play on a club’s first team in the Senior or Intermediate grades will be ineligible to compete on their club’s second team at the lower grades while for clubs competing in the Junior B & C grades, the number ineligible to play is the first 15.

The controversial aspect, however, was an exception which stated that any player who played in the knockout stages of a higher grade would be automatically ineligible for the lower grade, a move that several clubs strongly opposed.

Proposing the motion, County Board Secretary Declan Bohan informed delegates that were a new bye-law not adopted, it would mean that any player who played at any stage for their first team in the championship would be automatically ruled out of the lower grades, a situation that applied prior to 2005.

Mr Bohan said that with population trends, the winds of change are sweeping across the county and certain areas were going to get much stronger and other areas were going to get much weaker, pointing out that there was a danger that the second teams of strong clubs would move further up through the ranks and that the first teams of other clubs would have to make way.

He added that there would be four first string teams contesting next year's Junior championship and the idea behind the motion was not to make it easier for first string teams to win but to give them a better opportunity of being competitive and not being beaten by teams featuring players who had played at a much higher level.

Cloone’s Sean McGovern backed the motion, saying that it would help first string teams coming up against strong second teams in the lower grade. The motion would balance the strength of teams in the lower grades, adding that Cloone didn’t feel they got justice after they were knocked out of the Junior championship by a team featuring players who had played at a much higher level.

Eoin Meehan said that his Kiltubrid club could see problems with the motion, that it could dilute the quality of the Junior championship and while they had 29 players lined out for their second team’s Junior C Final appearance, they needed six players from their first team to actually reach the final.

Ballinaglera’s Enda Gilrane said that his club would not be able to put out a second team as the motion stands but it would be better than the alternative of every player who featured for a first team not being eligible to play in a lower grade.

Mohill’s Seamus Kennedy said that his club were seen as the bad guys in this debate but said that Mohill would not be able to field a third team if the motion passed. He pointed out that Mohill’s second team was very strong and that the motion would not have the effect the proposers of the motion think it would.

Ciaran Sheridan of Glencar Manorhamilton backed the previous speakers, saying the motion would have a detrimental effect on their third team but reverting back to the 2004 position would be worse.

Carrigallen’s Bernie Dolan said that most comments from smaller clubs seemed to be opposed to the motion. Clubs wanted to give football to everybody but passing the motion would put clubs in an extremely difficult position where they might be forced to withdraw a team because players had featured for their senior team and were no longer available.

Ballinamore Sean O’Heslins' Niall Gormley said that if the exception was removed from the motion, it would get an awful lot more support. Ann McGee of St Patrick’s Dromahair said her club had worked very hard to build up their numbers and it was important all players get game time but this motion would go against that.

Seamus Kennedy proposed an amendment to the bye-law, removing the exception clause from each grade and leaving the limit of ineligible players at 18.

Declan Bohan said that he wanted to make it very clear that the management committee were not trying to drive through the motion with a sledgehammer or go against the wishes of clubs. However, it should be noted that should the bye law pass with the exception removed, it would take a 60% vote in the future to change the bye-law.

Enda Gilrane proposed that if the exception was left in for second string teams in the Intermediate and Junior grades, it might solve the problems that Declan was highlighting.

Glenfarne Kiltyclogher’s Noel Cullen said that he had listened to the entire debate and most of the talk was about how second teams would be depleted. His club was one of the few without a second string team and everybody wants to get as much football as they possibly can.

Mr Cullen felt that Enda Gilrane’s proposal as it would be the better of the three options facing delegates.

Two amendments to the motion were eventually put to delegates - the first seeking the removal of the exception completely while a second amendment asked that the exception apply only to second string teams competing in the Intermediate & Junior A grades. Under procedure, the second amendment was voted on first and passed with 44 votes for and 29 against.

That meant that the amendment motion was put to delegates and it passed although Seamus Kennedy queried if the amendment needed 60% to pass as changes to bye-laws needed a 60% vote in favour.

Declan Bohan said that changes to existing bye-laws needed 60% approval but as this was a new bye-law, a simple majority was all that was needed, although he did point out that the 44-29 vote received above 60%.