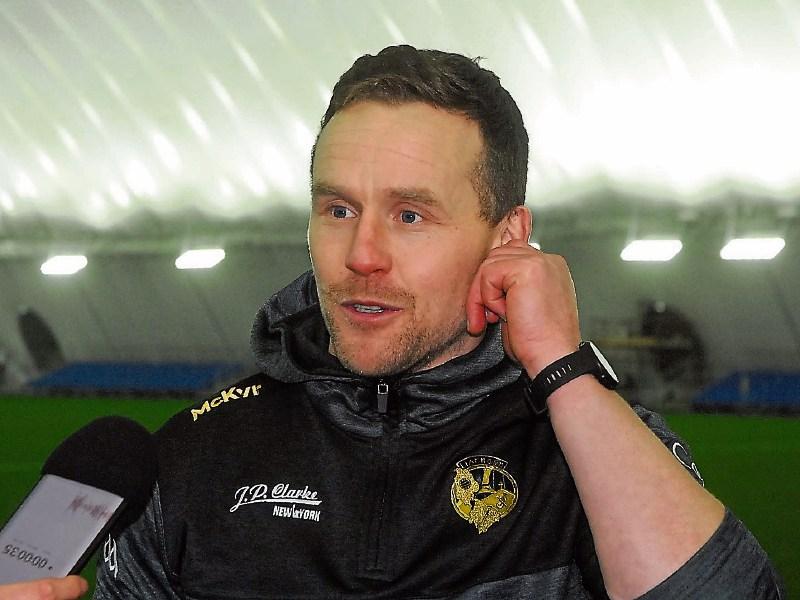 New manager Andy Moran is looking for consistency of performance from Leitrim ahead of next Sunday's opening game against Cavan in the Allianz NFL Division 4 campaign Picture: Willie Donnellan

Consistency is the key theme for new manager Andy Moran as Leitrim welcomes 2020 Ulster champions Cavan to Avant Money Pairc Sean Mac Diarmada next Sunday, January 30, for the opening round of a much anticipated Allianz NFL Division 4 campaign.

You’d have got long odds on any excitement about Leitrim football eight months ago after a mauling at the hands of Mayo in the Connacht Senior championship but the growing anticipation for Sunday’s game is reflective of the impact the former Footballer of the Year has generated in the county.

It’s fair to say that the excitement and anticipation is reflected in the squad of players Moran has assembled as Leitrim’s manager tells the Observer: “We put an awful lot of work in over the last couple of weeks, the response we’ve got from the players has been really positive, you’d be blown away. In terms of our own preparation, as a management team, myself, Mike Solan, James Glancy and Barry McWeeney, we’re just chuffed at the response that we’ve got.”

“You saw the quality Sligo can produce in the Dome, Wexford are a strong team who held Dublin to seven points last year. It is probably a bit of a skewed league if we’re being honest.”

Yet for all that, Moran still believes Leitrim can make an impact in Division 4 this year! “Do we think we can compete? We absolutely think we can.”

“And I mean consistency in game as well as throughout the course of the League, that we don’t have these peaks and troughs in a game - when you are bad, you are still going at a nice level, you’re not dropping down to a two out of ten from an eight out of ten. That is what we are looking at.”

That inconsistency was a trait that plagued Leitrim throughout Terry Hyland’s last year and Andy reveals he has spoken with the Cavan man about his experiences: “I’ve talked to Terry in the past and that is what we’re looking to improve, we’re looking to get these young guys, these young exciting players we have, the Bruens, the Caseys, the Ryan O’Rourkes, the Riordan O’Rourkes.

“We want to filter these young exciting players we have and match them in with the guys with Paddy Maguire, Donal Wrynne, Keith Beirne and really show their worth on the county stage and produce that 70 minute performance.

“It is not going to be perfect for 70 minutes but when those bursts come, you can follow it up with a consistent, strong level and if we get that, we will make huge progress. That is what we’re trying to do and please God, it will lead to some positive results.”

Facing up to his first League match, Moran has been pleasantly surprised with the talent at his disposal. “The surprises have been all pleasant if I’m being honest. We’ve a depth of talent that I didn’t think we had when I first approached the job, particularly up front in our forward division where we have players who can make a difference.

“We have had trials, we’ve had 40 on the panel and the amount of strength work these guys have done has been incredible and it has been lovely to see them over the course of the national league to just show their true worth because, as a group, we haven’t shown that over the last two years.”

Good performances in challenge games, including a two point win over Mayo, have spread around the county, adding to the optimism for the coming year but Moran is quick to recognise the challenge that lies ahead.

“I played with a Mayo team who got beaten by Cavan not so long ago in MacHale Park in a Division 1 League game so you can’t be under any illusions here of the depth of the challenge that is ahead of us. The key thing is that you do your work on the opposition and we can only concentrate on ourselves and that is what we’re doing.

Indeed, you get the sense that Moran is here for the long haul: “I’ve talked to Brendan Guckian, we’ve done an awful lot of work with the U20s and our aim isn’t over one year, we want to make this over the next two to three years and make a really solid foundation for Leitrim going forward.