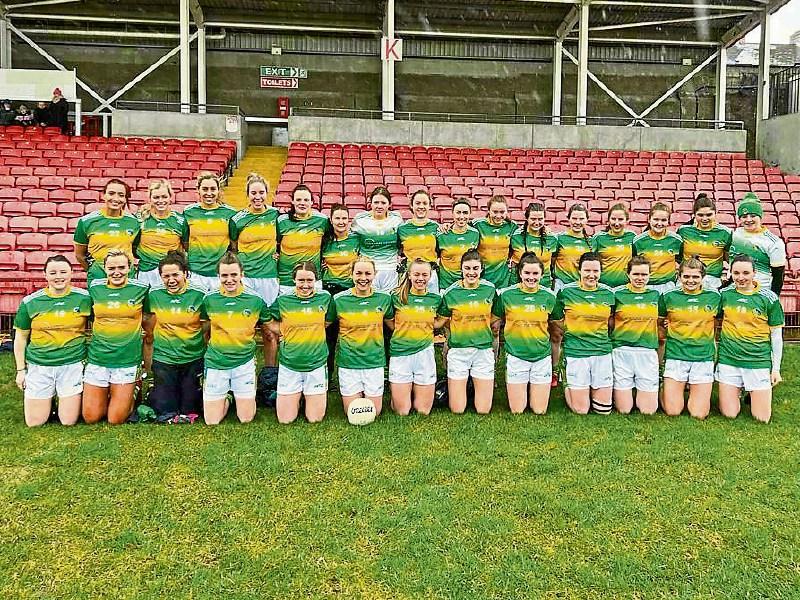 Leitrim booked their place in the Lidl LGFA NFL Division 4 Semi-Finals but struggled to overcome a tenacious Derry side who put behind them a traumatic week to push the Green & Gold to the limit in Celtic Park on Sunday.

Stand-in Derry manager, Paul Simpson, appointed after Odhran McNeilly stepped down last Tuesday, was pleased with the display his team put up against a Leitrim team who easily saw off Fermanagh in the first round of the competition: “Leitrim scored 4-18 the last day they were put and we knew what we were coming up against but we didn’t do too badly I thought.

“I thought we put in a performance and we were very unlucky to be honest. I don’t think we got much rub of the ball. I felt there were a few decisions which went against us and we conceded a really, really bad goal at the tail end of the first half, but I think the conditions contributed to that more than anything else.

“We know that Leitrim are at a further stage of development than us. They are an Intermediate team. This was a position I didn’t expect to be in but we had a plan and we worked the plan to see if we could win it in the second half. We got a few scores but it didn’t work out the way we planned it but we gave it an effort.”

There was plenty of patience in Derry’s play in the early stages, but they just couldn’t finish off their good approach play with both Ciara McGurk and Orla McGeough hitting wides in the opening five minutes.

It took 15 minutes for the first score of the game to arrive and it did come Leitrim’s way with Carla Le Guen setting Emma McGovern away and she made no mistake in splitting the posts for the first time.

The scale of the task facing Derry in the first half was summed up just after the first water break when Ella Rose Sainsbury got herself into a shooting position and despite putting everything into her effort, the ball held up in the wind and fell kindly into the arms of Niamh Ryan.

At this stage Leitrim were beginning to take control with a high press making it difficult for Derry to get out of their own half, and struggling to keep possession as a result. Yet Leitrim’s poor finishing kept Derry in touch with Nuala Browne the latest to pass up a simple free for the visitors right on front of the posts. In all Leitrim hit six wides in the first half.

Derry were finally able to make some progress into the Leitrim half, and they got their first score as a result. On a day when no free was looking easy, Leah McGonagle saw a close-range free drop short, but thankfully for Derry Ella Rose Sainsbury reacted quickest and popped over Derry’s first score with the help of the crossbar.

That score should have been enough to send Derry in level at half time, but disaster quickly followed.

A pass forward by Elise Bruen, aimed to set McGovern in on goal, was just missed by the forward, but also by Gunn who came charging out of goal and slipped, and the ball rolled right past the Derry goalkeeper and into the net to give Leitrim the most fortuitous of goals.

A miserable end to the half ended with Joanna Corr being sin-binned with the hosts ending a goal behind and just 14 players on the pitch as Leitrim led 1-1 to 0-1 at the break.

Derry got off to a brilliant start by scoring less than two minutes into the second half. While the entire first half almost passed them by before they got off the mark, they wasted no time with the wind now at their backs, with Orla McGeough making it 0-2, 1-1.

That was quickly followed by a score from Ella Rose Sainsbury, who too full advantage when Derry won the ball by pressing on a poor kick out by Ryan, the Steelstown forward reducing the deficit to just one point with less than five minutes of the second half played.

A score by Joanne Guchen proved timely for Leitrim and dented any momentum Derry had, and with the weather disintegrating again, the home side lost the initiative and Lea Fox was able to restore the three-point lead with a simple score to make it 0-3, 1-3 midway through the half.

Three became four with Michelle Guchen doubling her personal tally with a free and the game looked to be getting away from Derry after that positive start.

There was a chink of light for Derry as Leitrim were forced down to 14 following a yellow card for Clare Owens, but despite pouring bodies forward the goal they needed just would not come. An attempted point from deep by Orla McGeough was parried out from under the crossbar by Ryan, but there was no one in a red and white shirt to capitalise.

McGeough did pull a score back to leave a goal in it but Carla Le Guen responded immediately for Leitrim to just extinguish any faint hopes that Derry may have had of pulling this one back late on.

A disappointing game ended with Kate Gribbin sin-binned and the final kick of the day added another score for the visitors, with Guchen taking her tally to three to wrap up an ultimately comfortable victory for Leitrim.