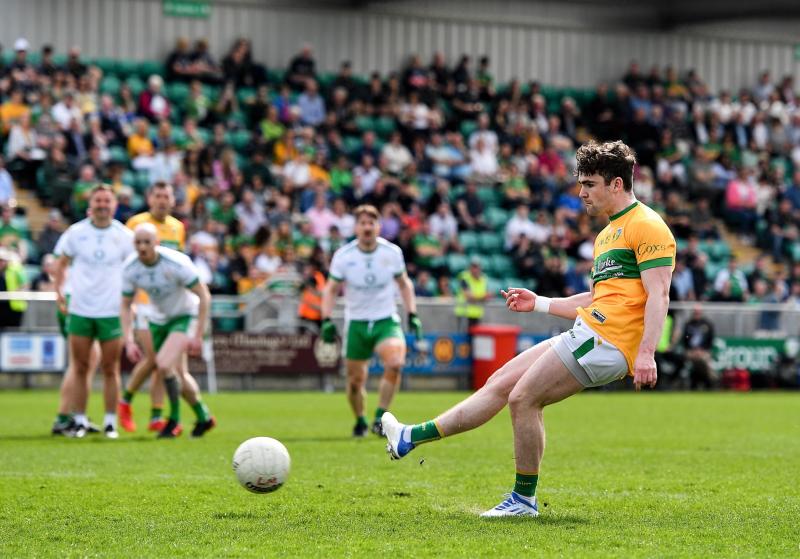 Leitrim footballers and fans let out a long sigh of relief as a breakaway Ryan O’Rourke goal with the last kick of the game secured the Green & Gold victory over London in the opening round of the Connacht Senior Football Championship in McGovern Emerald Park in Ruislip.

With London mounting a ferocious fightback in the final ten minutes to cut an eight point Leitrim lead back down to a solitary score, Andy Moran’s men kept their heads to secure their place in the Provincial semi-final against either Mayo or Galway.

This was a game where Leitrim opened up good leads not once, but three times only to see London fight back and they were looking good value to force extra-time when a move started by keeper Darren Maxwell eventually ended with Ryan O’Rourke notching his second of the contest.

Leitrim got off to a blistering start, O’Rourke and Darragh Rooney scoring inside the first three minutes before a foul on Shane Moran allowed the Fenagh St Caillin’s man to dispatch the penalty.

The Green & Gold looked in control as halftime approached but four unanswered points saw London trail by just a point at the break, 1-6 to 0-8. Leitrim again surged out in front, going five points clear but they could never pull away from a defiant and dogged London challenge.

Leitrim must have thought they had wrapped the game up when Donal Wrynn scored Leitrim’s second goal but barely a minute later, London hit back with a goal from Sean Hickey and when Fergal McMahon launched a rocket to the Leitrim net, an eight point gap was back to just two. 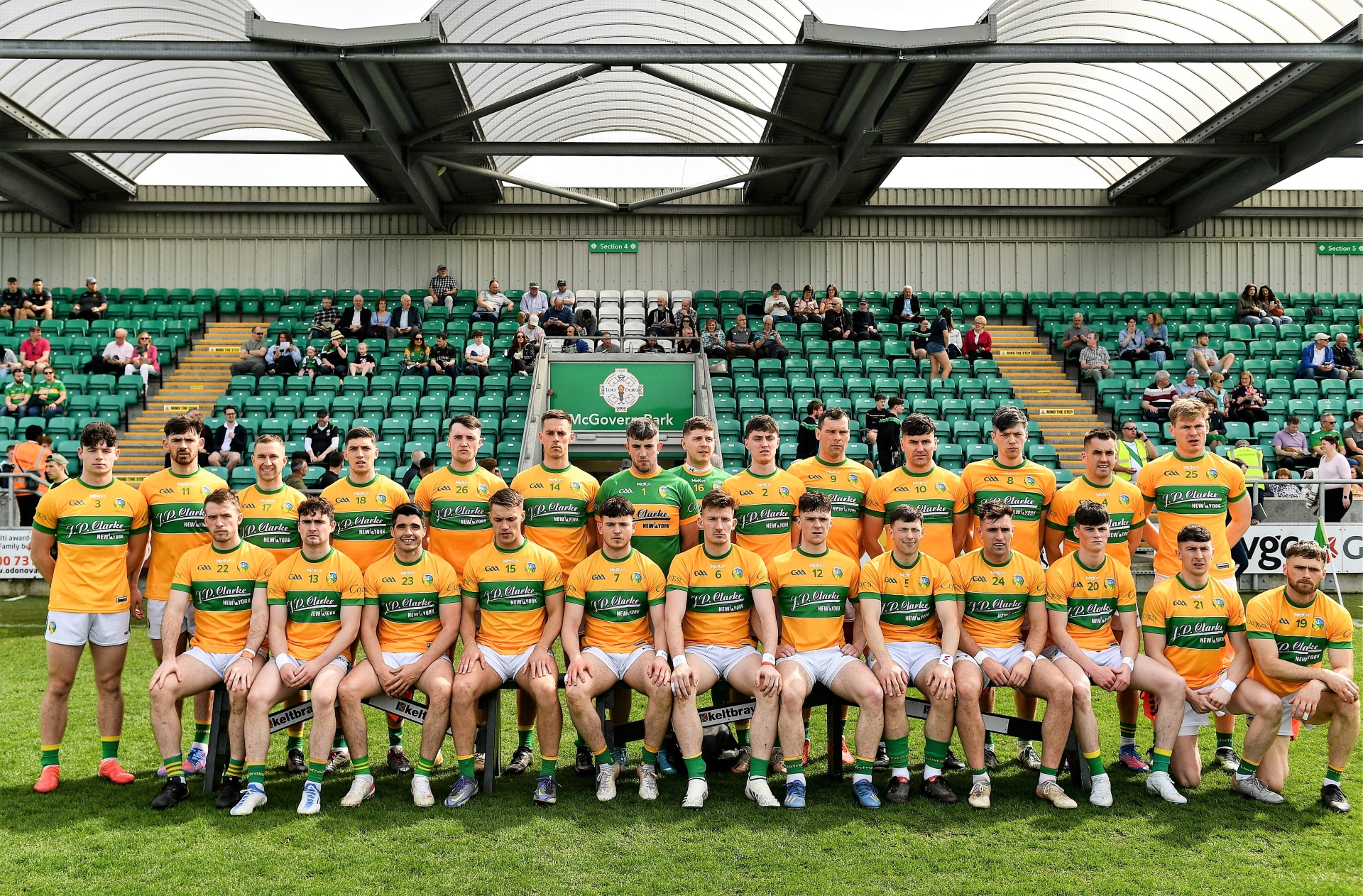 London narrowed the gap to one and had the chances to force an equaliser but Leitrim’s defence stood firm with O’Rourke’s goal sealing a vital victory for Andy Moran’s troops.

Darragh Rooney opened the scoring for Leitrim from a free after a couple of near misses in the third minute. London’s first real attack saw Darren Maxwell make a vital save to deny London corner-forward Henry Walsh after a period of patient play.

The Leitrim keeper also did well to keep a shot from Stephen Dornan out from under his posts but Leitrim extended their lead when Paddy Maguire robbed London captain Liam Gavaghan, his counter-attack leading to a long ball into the danger area, Ryan O’Rourke curling a shot just inside the posts.

Leitrim’s good start got even better when Mark Plunkett’s long delivery was brilliantly fielded by Shane Moran in the midst of a couple of defenders who fouled him. Ryan O’Rourke dispatched the spotkick with calm authority to give Leitrim a wonderful start.

Mental fortitude vital in Ruislip cauldron if Leitrim are to prevail

London finally got their opening score when Henry Walsh fired over from a difficult angle on 14 minutes for their first score of the game. Chris Farley then added a second for the hosts as Leitrim were turned over on a second kickout.

Leitrim tried to hit back but Ryan O’Rourke’s pass was palmed away by London keeper Noel Maher and the home team started to cut the gap with another pointed free from Chris Farley to leave two between the teams on 18 minutes.

Mark Plunkett halted London’s run of score from distance after good work from Conor Dolan and the Glencar Manorhamilton man got on the scoresheet with a fabulous point under pressure after 23 minutes.

London midfielder Thomas Lenehan scored a great point from a very tight angle to cut the gap back to a goal. A quick Darren Maxwell kickout found James Rooney and the Glencar Manorhamilton man found his cousin Darragh who scored from a tight angle.

London cut the gap further with a fine Liam Gavaghan free from just inside the 50 yard line to leave a goal between the teams and they reduced the gap further when midfielder Stephen Dornan got in behind the Leitrim defence to claim a mark which he converted.

Another Gavaghan free left the score at 1-6 to 0-8 at the halftime break in favour of Leitrim as London reduced Leitrim’s five point lead with four unanswered scores. 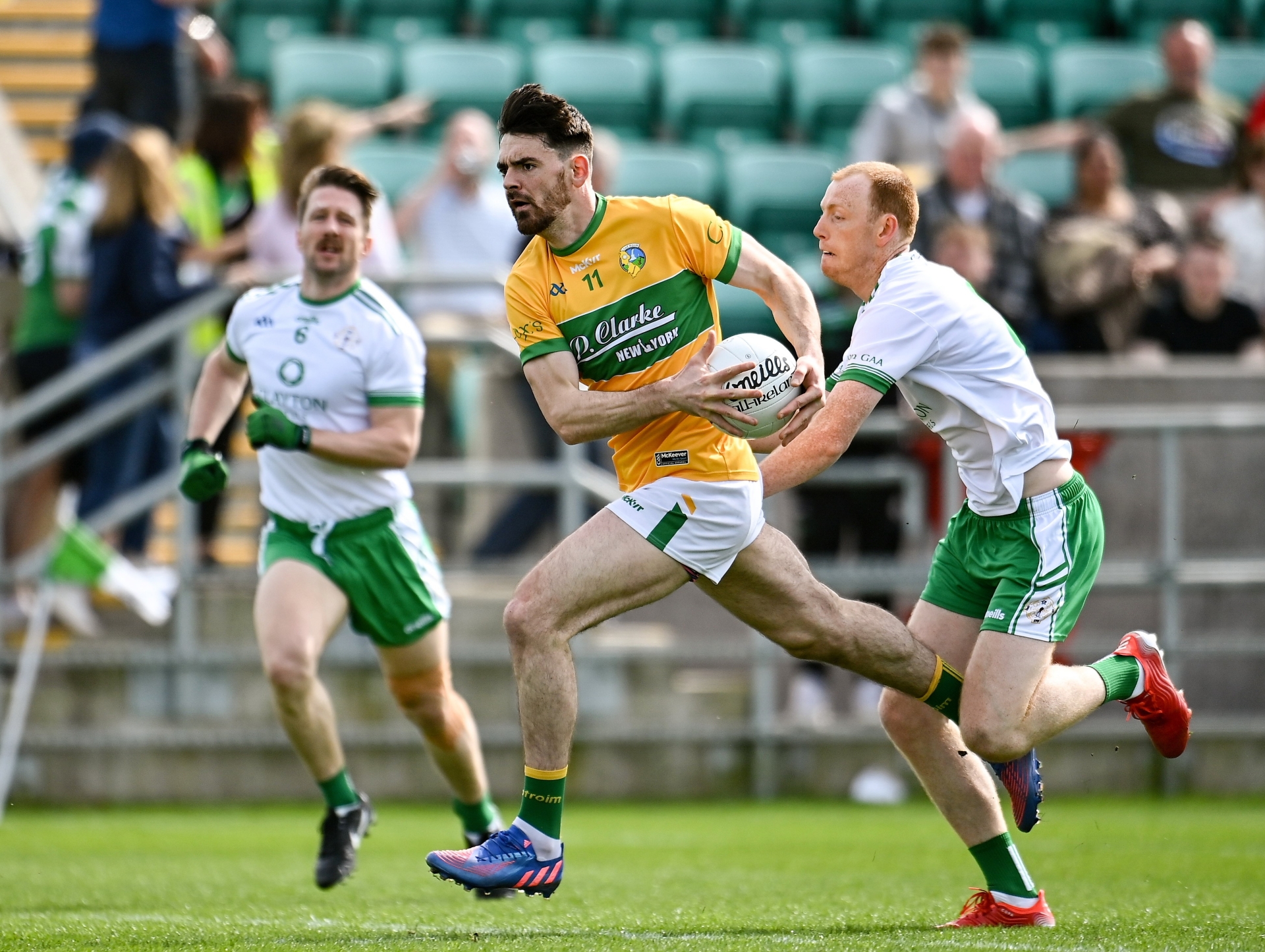 Mark Plunkett on the charge for Leitrim against London Picture: Sam Barnes Sportsfile

Leitrim opened the scoring in the second half after good work from Shane Moran, Pearce Dolan fired over with his shot hitting the post and going over. The good start continued when Donal Wrynn fired after a mark to get the Leitrim lead back out to three points.

Pearce Dolan beat three London players to fire over his second point of the second half on 41 minutes to stretch the lead back to four points. London then hit a free wide and Leitrim were starting to move clear when Henry Walsh was dispossessed and launched a counter-attack, Donal Wrynn finding a charging James Rooney who fed Ryan O’Rourke for a fisted point.

Liam Gavaghan did pull back a point from a lovely free in the corner but a Donal Wrynn fifty that just kept over the bar, deflected over by keeper Noel Maher, restored the Leitrim lead. Gavaghan converted another free to keep London four points back with 20 minutes left in the game.

Leitrim introduced Evan Sweeney and the Glencar Manorhamilton man scored a wonderful point and Andy Moran’s team were thankful for Darren Maxwell’s coolness under pressure as he dealt well with a long ball from Conal Gallagher.

Leitrim counter-attack with Pearce Dolan making a long bursting run for 60 yards through the London defence before feeding sub Jack Heslin. The Gortletteragh man, barely a minute on the field, played the ball across the face of the London goal for Donal Wrynn to palm the ball to the net.

Gutted Guckian wants Leitrim to build for the future

Incredibly London hit back immediately with a goal as Liam Gavaghan and sub Fergal McMahon combined to set up another sub Sean Hickey managed to force the ball in the net, Leitrim’s hopes that the goal would be chalked off for a square ball dashed when the green flag was raised.

London then got themselves back in the game with a fabulous goal from sub Fergal McMahon as he pulled on a loose ball from the 21 yard line to cut the Leitrim lead back to just two points with four minutes of normal time left.

Leitrim were dealt a further huge blow as when Evan Sweeney was handed a black card a minute later for a tackle on Ronan Sloan, leaving the Green & Gold down to 14 men

London then broke with James Hynes firing over to cut the gap to a point and with six minutes of added time announced, Conal Gallagher missed a chance to tie the scores as did Liam Gavaghan in added time.

With London pushing for an equaliser, Leitrim struck for a match winning goal when Darren Maxwell claimed a high ball and found Mark Diffley. Under huge pressure, the St Mary’s man offloaded to James Rooney and a magnificent crossfield clearance found Emlyn Mulligan out on the wing.

Mulligan fed the ball to Donal Casey who found Ryan O’Rourke charging through on goal with his cousin Riordan in support but he needed no help, firing low to the net to seal victory for Leitrim.