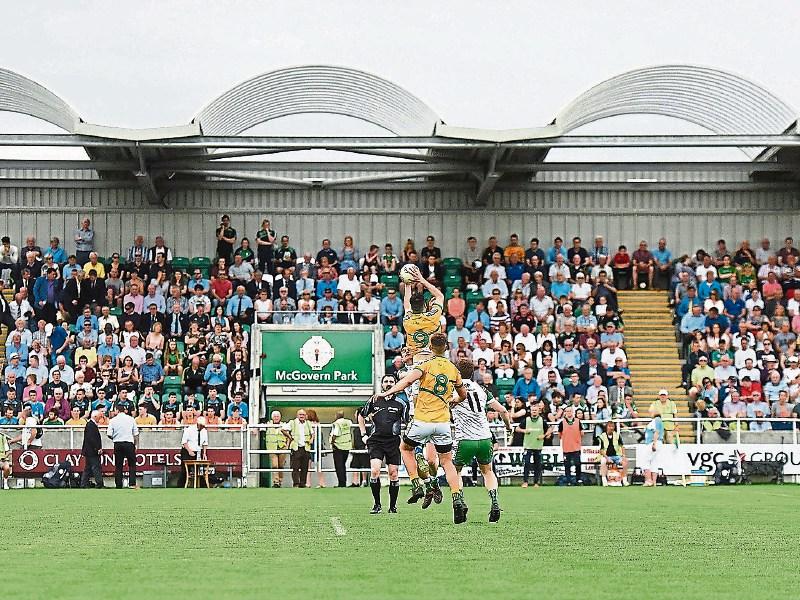 The throw-in for the 2017 Connacht SFC clash between Leitrim and London in McGovern Emerald Park in Ruislip Picture: Sportsfile

It is 30 years since I first stepped foot in the now renamed and revamped McGovern Emerald Park in Ruislip and to say it is very different times is understating it quite a bit.

Back in 1992, hopping on Ryanair for a quick weekend across the Irish sea wasn't a regular occurrence so visiting the English capital, with all its glamour, hustle and bustle was a step out of the ordinary for your average Leitrim Observer reporter.

To give some idea of the novelty of the whole occasion, myself, my good friend Willie Donnellan and the late Cormac Mac Giolla, all members of the local media, made the journey across the pond with the Leitrim team, stayed in the same hotel and even shared the bus to Emerald Park - hard to see that happening nowadays!

Memories of that game remain as fresh today as they were then from the oppressive heat that weekend in London through the madness of hordes of Leitrim fans converging from all parts of London and the UK for a rare chance to see their native county, a county on the up under the charismatic PJ Carroll, in action.

As I write this, snippets flash in my memory from meeting Tommy & Bridie Moran in Leicester Square through to queuing up for a late night snack in Piccadilly Circus with a few of the players at about 2am on the night after the match.

1997, I stayed with my sister who was then working as a nurse near Enfield before she returned home to take up a post in St James' Hospital in Dublin, or 2012 when the journey across filled me with excitement, not just for the game but the knowledge that a few weeks later I'd be back again to spectate at the Olympics.

As the years have gone by, the novelty of these excursions have worn off - the growing clamour of instant news and production deadlines means what was once a leisurely weekend in London is now a hectic one-day trip filled with deadlines, writing up reports and generally get the news out there as quickly as possible.

But the one thing I'll never forget is the privilege it is to attend these games, meeting what seems like thousands of exiles from all over the UK who converge on the north west corner of London to cheer on Leitrim.

Meeting people like Cormac Murray, Padraig Farrell or Linda Tighe or so many others too numerous to mention who made their lives in London and places further afield reinforced just what seeing a team wearing the Leitrim colours means to our exiles.

Those of us based at home take it for granted that we can pop into Pairc Sean or make the spin down the road to Markievicz Park or Semple Stadium to cheer on the Green & Gold but next Sunday's Connacht SFC Championship clash is a chance for so many to reconnect with home and their sense of identity.

That game back in 1992 lulled me into a false sense of security, the 3-17 to 2-10 victory, highlighted with a superb Brian Breen goal, gave this young reporter the notion that London were there to be bullied and beaten but lets just say, 1997 changed all that!

Of all the glory Leitrim enjoyed in those days, I don't think a game ever caused such consternation and angst among the Green & Gold supporters - Declan Darcy set a Connacht scoring record with a personal tally of 2-13 but it was the controversial penalty awarded ten seconds from the end of normal time that enraged London.

If I'm being honest, standing on the sideline beside an increasingly bewildered Leitrim dugout, we all believed the game was gone - the ashen faces of manager Seamus Bonner and former Dublin star and All-Ireland manager Pat O'Neill, there as an advisor, spoke volumes.

But Leitrim were rescued when Galway referee Des Joyce spotted a foul on Adrian Cullen, whose two sons are in the Leitrim squad for next Sunday, that nobody else did and when Darcy converted, the scores were tied and as their legs tired in extra-time, London were quite frankly robbed of the victory they had deserved.

The controversy soured the relationship between the counties, up to then a very warm and friendly one, for years after and from this day to that, Leitrim's visits to Ruislip have been endured rather than enjoyed as London lift themselves beyond all measure for the visit of the Green & Gold.

A dour struggle saw Leitrim prevail by five points in 2002, the gap was down to four points five years later in the pouring rain before the 2012 edition looks like a comfortable 0-12 to 0-8 victory on paper but comfort is all relative in these games - it took the introduction of Shane Moran, London born as it happens and just out of the Minor ranks, to spark a Leitrim comeback that saw the Green & Gold draw level in the 67th minute before finishing strongly to seal a victory.

2017 was no easier - a brace of goals from Ronan Kennedy and one from Darragh Rooney sealing a hard fought 3-10 to 0-16 victory and I firmly believe then manager Brendan Guckian never got the credit he deserved for steering Leitrim through that game and the New York contest a year later. Remember we travelled with genuine fears the Green & Gold would be sent home with their tails between their legs

McGovern Emerald Park is a very different place than it was 30 years ago - a fantastic stand and a fabulous surface have seen the grounds transformed but some things will no doubt remain the same ... the crush in the bar and beer tents, old friends and family meeting up and the sure fire fact that London will test Leitrim's resolve to its very core.

I won't be there this year but I'll be there in spirit. To those making the trip, enjoy yourselves and get behind your county team. Victory for the home team wouldn't surprise me at all but I believe and pray that with the Leitrim hordes cheering them on, the Green & Gold can make the 2022 journey visit to Ruislip one to remember!