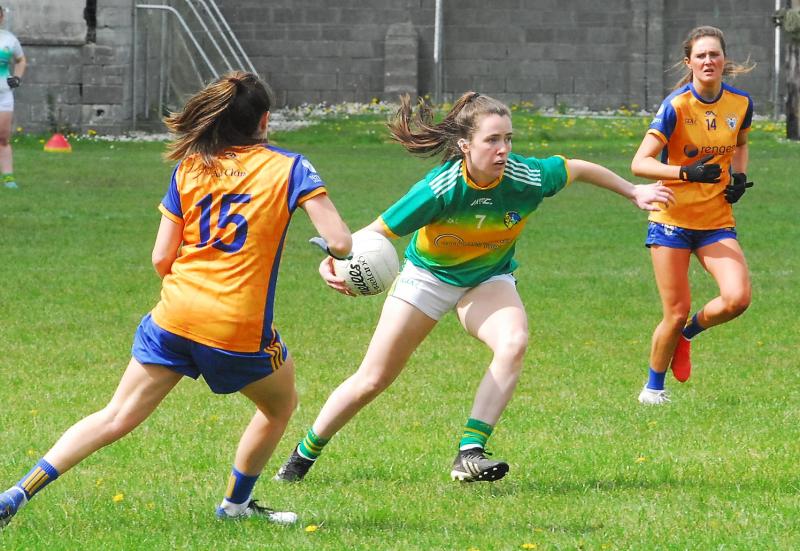 After shocking Division 3 champions Roscommon just over a week ago, Leitrim were brought back down to earth with a very heavy bump as they were outclassed by an impressive Clare side in Sunday’s Connacht LGFA Intermediate championship clash in Dromod.

Leitrim famously beat the Banner women last year in Ballinasloe in the All-Ireland championship, three goals in three minutes seeing the Green & Gold shock the then Division 2 team 4-7 to 2-9 and it was clear that the visitors to Bornacoola GAA club’s grounds had come on a mission.

From the word go, Clare played with a speed and intensity that put Leitrim in serious trouble and were in not for some bad wides, the intervention of the post and a good save from keeper Michelle Monaghan, the Munster women could have been out of sight in the first ten minutes.

Leitrim briefly rattled Clare when, in their very first foray into opposition territory, Leitrim worked a goal chance for Roisin McHugh, converted well by the Ballinamore women and it seemed as if Hugh Donnelly’s charges were frustrating a Clare team who hadn’t won a game this year.

Five minutes before halftime, Shaylyn Ward scored a wonderful effort from the corner to leave just two points between the teams, a scarcely believable fact given the level of Clare’s dominance up to that stage.

But Clare finally found their groove as they rattled off four unanswered points from the break and when they found the net nine minutes into the second half, the game was as good as over.

Leitrim did start without Sinead Tighe and Laura O’Dowd and both were greatly missed and even the early introduction of Mary Alice Maguire and Carla Le Guen couldn’t stem the tide as Clare did a great job in nullifying the threat of Michelle Guckian.

Guckian couldn’t escape from either Siofra Ni Chonaill or Tara Kelly but in truth, the problems were much further out the field as Leitrim simply couldn’t get the ball past midfield where Aisling Reidy, Laurie Ryan and Sinead Considine ran the show. 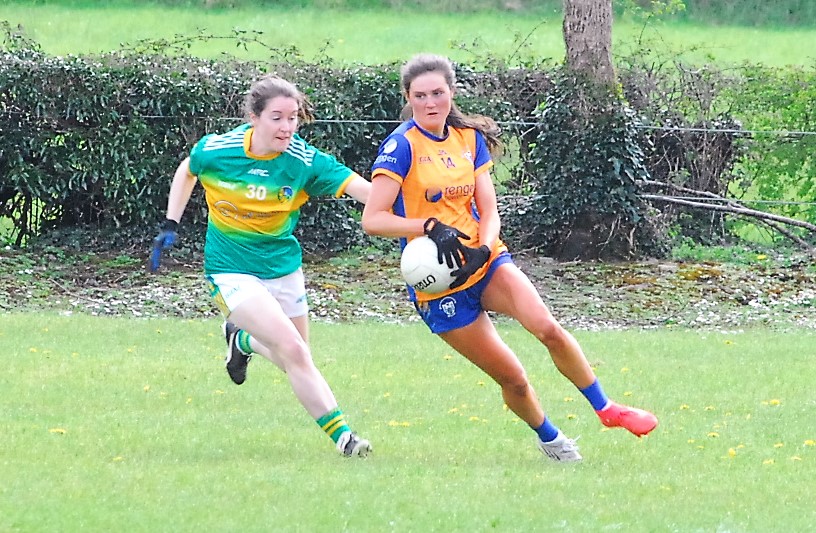 Upfront, Niamh O’Dea and Fidelma Marrinan, once they found their shooting boots, just had too much class over an overworked and overwhelmed Leitrim defence.

Leitrim can book their place in the Connacht Final next Friday evening when they take on Sligo in Cloone at 7pm but with Clare ineligible to take part in the final, they will need to regroup and put this heavy defeat behind them in the coming weeks.

Clare started in whirlwind fashion as they basically camped in the Leitrim half with Hugh Donnelly’s team unable to get the ball beyond halfway. But Clare were not taking full advantage of their dominance with only a point apiece from Niamh O’Dea and Grainne Nolan to show for all their territory.

Fidelma Marrinan shot into the side netting but in their first forray into the Clare half, Michelle Guckian’s long free broke nicely for Leah Fox on the charge and she played the ball across the face of the goal for Roisin McHugh to finish to the net.

It seemed like a body blow for Clare as they must have had memories of last year’s championship meeting between the counties and they followed up with two poor wides before O’Dea and Marrinan each fired over in the space of a minute.

O’Dea had a poor shot gathered by Michelle Monaghan with Marrinan adding another as she broke through on goal. Clare’s Catriona Callinan saw a goal shot hit the post and rebound clear after she was found in behind the Leitrim defence on 19 minutes, Amy Sexton scoring a point two minutes later.

Marrinan tried to fist the ball over the bar but saw her shot hit the woodwork while the Clare full-forward was denied a certain goal by a good Monaghan save after a flowing move that cut Leitrim open.

Incredibly, Leitrim then rattled off the next two scores, Michelle Guckian from a free before another free was batted out by the Clare keeper only for Shaylyn Ward to score a wonderful point from a tight angle.

It almost got better when Leitrim, in only their fourth real attack into the opposition half, but Roisin McHugh’s fisted effort was well saved by Clare keeper Micaela Glynn three minutes before the break.

Clare obviously took note to their close escape and rattled over four unanswered points before halftime from O’Dea, Geraldine Nolan (free) and two from Marrinan as Clare pushed up on the Leitrim kickout and won repeated turnovers to lead 0-11 to 1-2 at the break.

Leitrim hoped that the wind would prove beneficial in the second half but it was Clare who opened the scoring from a long range Chloe Moloney free. Michelle Guckian had a bad wide but got Leitrim off the mark with a fourth minute free.

However, Clare were growing in confidence and when O’Dea scored a well worked point on six minutes, it foreshadowed what would come three minutes later as the Munster women put together a superb move from a free and eventually got the ball to Marrinan who blasted the ball to the Leitrim net, with the help of a deflection.

Michelle Guckian dropped a shot into the keeper before Charlene Tyrell was sin-binned for a high arm on 12 minutes, Niamh O’Dea collecting the free to point. O’Dea immediately added another before Marrinan tagged on another score.

Clare started emptying the bench with O’Dea finishing their scoring with 13 minutes to go but Leitrim were never able to work any sort of goal chances, Michelle Guckian well marshalled by Siofra Ni Chonaill. Guckian did add a free with less than four minutes to go but it was little more than a consolation score.