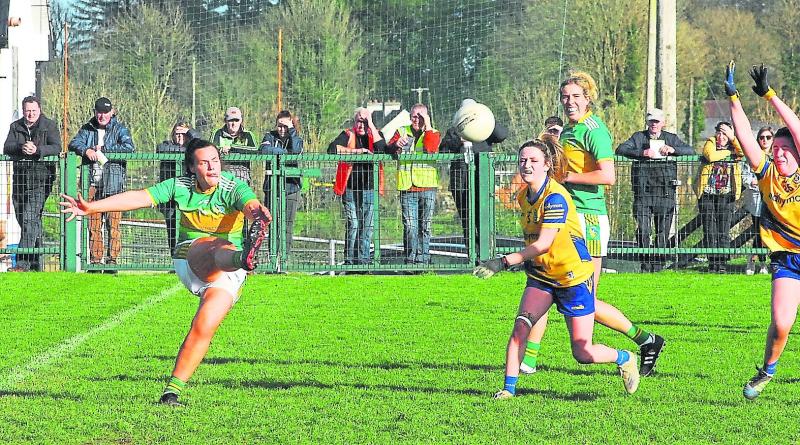 Michelle Guckian strikes for a first half point against Roscommon Picture: Willie Donnellan

A casual viewer of ladies football would not know which of the two teams who did battle in the splendid St Croan’s ground on Good Friday was the Division 3 champions and who was the team who failed to get out of Division 4 as Leitrim once again upset the odds when it comes to the Connacht LGFA Intermediate Championship.

Inspired, as always, by the splendid Michelle Guckian in attack, Leitrim belied their League woes to see off Division 3 champions Roscommon in an entertaining match where Leitrim’s ability to take their chances proved the critical difference between the teams.

Roscommon will look back on this one and wonder what went wrong as they hit the Leitrim woodwork with two chances that you would have banked as nailed on goals but that perhaps sums up the difference between the teams - the Green & Gold were much more clinical when the big moments came.

Consider a strong second half performance from the Rossies, boosted by the introduction of the impressive Lisa O’Rourke that cut Leitrim’s five point halftime lead down to a solitary point with five minutes to go. Just as it looked as if Roscommon had all the momentum, it was Leitrim who struck with Laura O’Dowd blasting home a well worked goal that took the wind out of Roscommon sails.

Each and every time Roscommon threatened, Leitrim were able to create chances with Michelle Guckian, more often than not, on the end of brilliantly worked moves that the home team simply had no answer to.

It wasn’t a one woman show - Ailish Cornyn and Sinead Tighe were superb in defence, Megan McGovern got through a mountain of work, Elise Bruen, Charlene Tyrell & Laura O’Dowd worked themselves to a standstill while Leah Fox’s clever play and incisive passing often led to scores or frees for Guckian to convert. 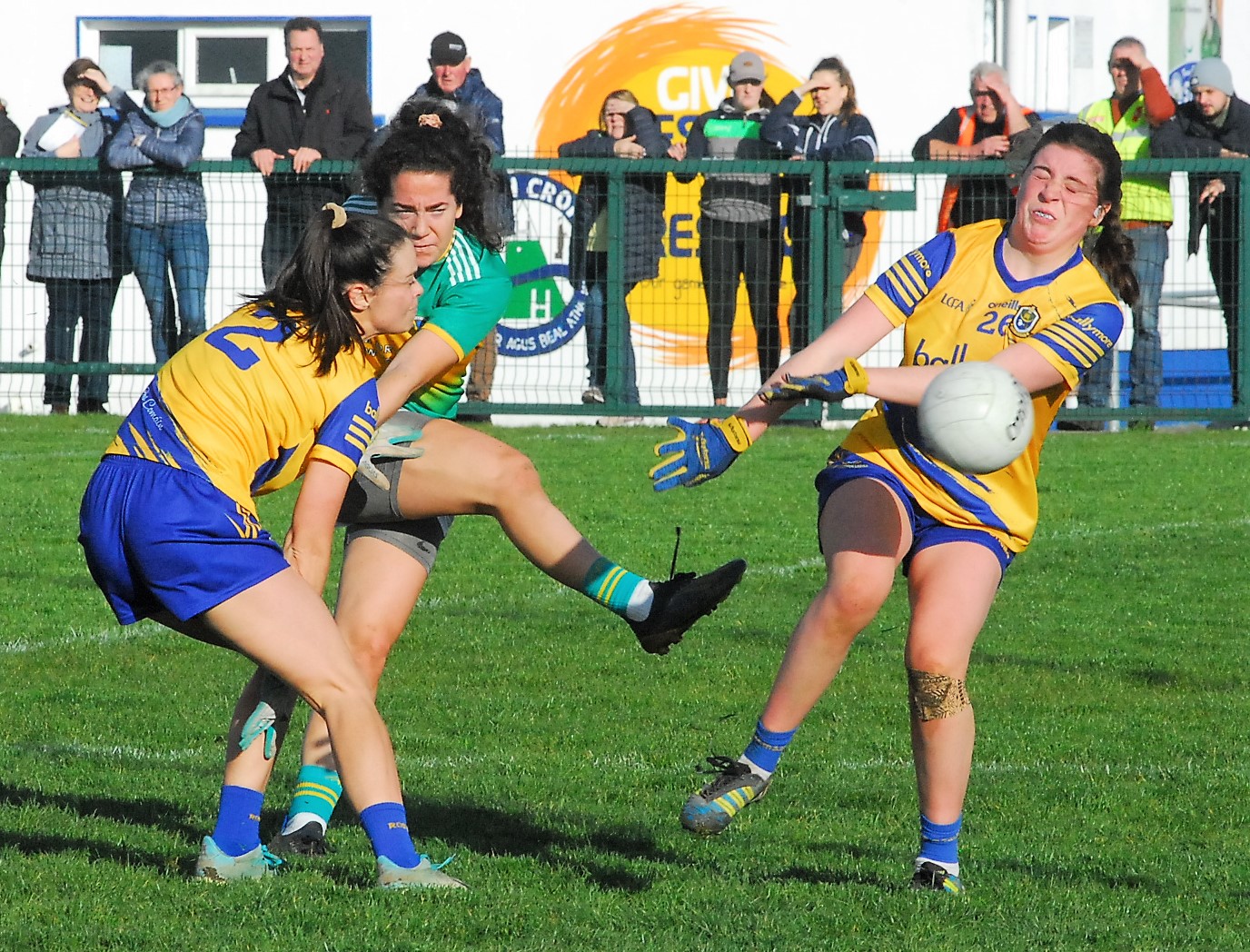 Leah Fox fires in a shot at the Roscommon goal on Good Friday Picture: Willie Donnellan

But safe to say that had Guckian been wearing the primrose and blue, Roscommon would have won the game and they must be ruing their decision to leave Lisa O’Rourke on the bench, the European Boxing champion changing the dynamic of the game in the second half when introduced.

But two Roscommon points in the space of 60 seconds from Natalie McHugh and Roise Lennon put the home team in front. Leitrim keeper Michelle Monaghan made a good stop from a low Fleming shot on five minutes with a foul on Leah Fox allowing Michelle Guckian to convert the free.

With both sides missing chances, Roscommon’s missed goal chance proved more damaging after McHugh was put clear through only to crack her shot off the Leitrim crossbar on ten minutes. The Kilglass Gaels player did add a point only for Michelle Guckian to point after more patient Leitrim play.

Kate Nolan scored from distance to put Roscommon back in front on 17 minutes but when Leah Fox played a long ball to Guckian and got a return pass, the Glencar Manor clubwoman was denied a certain goal by a wonderful save from Cummins.

But the Fox-Guckian connection, which was to prove crucial throughout the game, came up trumps on 20 minutes. Guckian found Niamh Tighe out on the wing, a quick pass into Fox who shot to the net from close range.

A rattled Roscommon tried to rearrange their defence but it mattered little as Guckian, free and play and Fox rattled off three points to leave Leitrim with a 1-6 to 0-4 halftime lead. 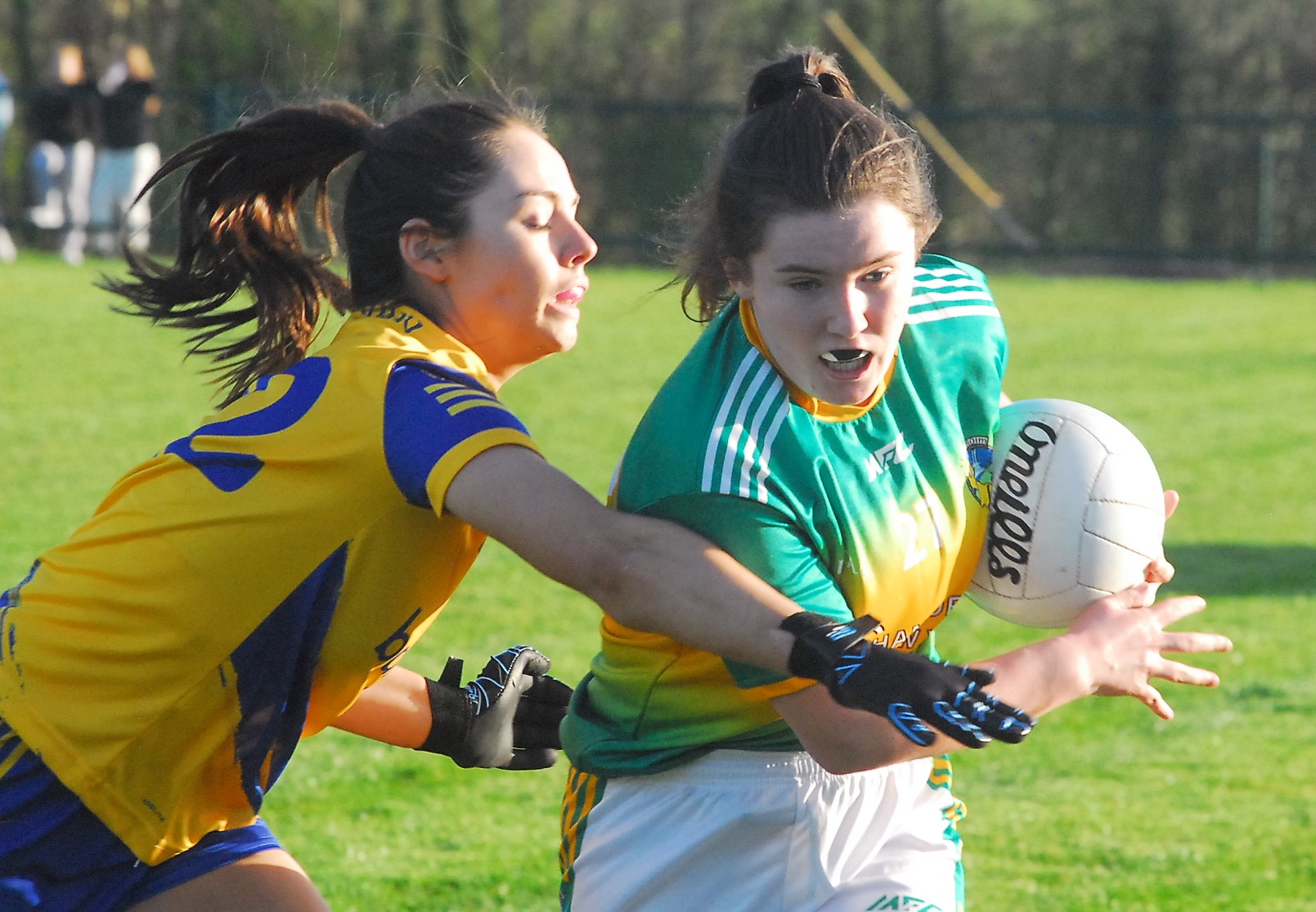 Roscommon introduced Irish international boxer Lisa O’Rourke after the break and she made an immediate impact, firing over a fine point after the throw-in while, stationed at full-back marshalling Michelle Guckian, she broke up a Leitrim attack and surged forward, providing the final pass for Laura Fleming to score.

Roscommon were forcing the pace, perhaps too much as an interception allowed Michelle Guckian to fire over a well worked point on six minutes but a minute later, Roscommon had the ball in the Leitrim net when sub Niamh Shanagher fisted the ball to the net.

Leitrim’s response was impressive - Michelle Guckian hit a free and then took a great pass from Leah Fox to score on 11 minutes. But Roscommon were now pushing hard and they were desperately unlucky not to tie the scores when Fiona Tully saw her shot come off the inside of the post and fly across the face of the Leitrim goal after a great run after 48 minutes.

Slowly but surely, Roscommon were closing the gap - Laura Fleming converted two frees to leave a point in it with six minutes of normal time left and all momentum with them. However, that momentum was punctured in dramatic fashion as a great move set the speedy Laura O’Dowd straight through the centre of the Roscommon defence to bury the ball in the net.

Credit to Roscommon, they hit back with good points from McHugh and Fleming free but with time almost up, they couldn’t break down a massed and hard working Leitrim defence. With Roscommon pushing for the goal they needed, they were ripe for the counter-attack with Guckian adding two more to her tally, one from a free, before Megan McGovern completed the scoring with a fine point two minutes into added time, securing a five point win for the Green & Gold.