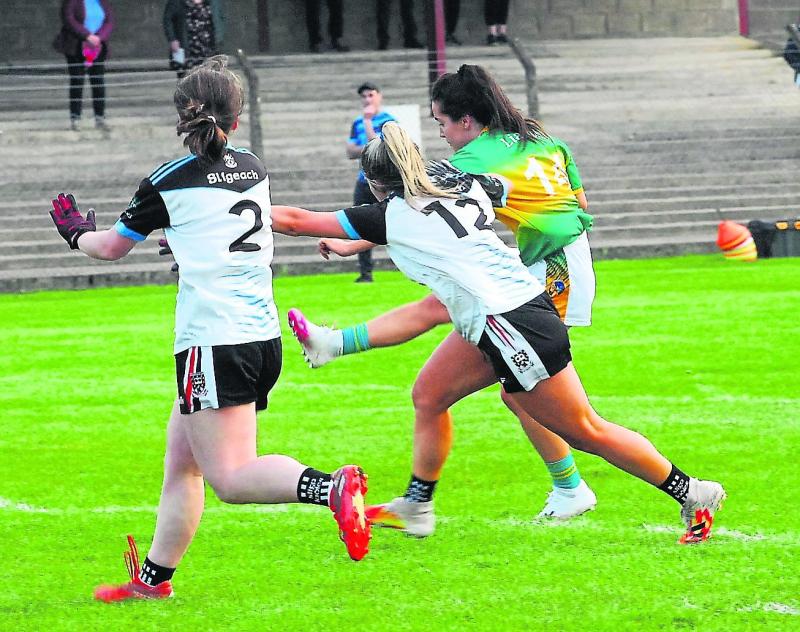 A dominant Leitrim booked their place in the Connacht LGFA Intermediate Championship Final last Friday in St Mary's Park Cloone as they proved far too strong for a new look Sligo.

Coming in on the back of a couple of heavy defeats at the hands of Roscommon and Clare, Sligo belied their struggles as they ran and ran as if their lives depended on it and gave Leitrim quite a few moments of concern over the 60 minutes.

Yet the Yeats women were unable to match Leitrim's sheer efficicency in taking their scores as even the departure of top scorer Michelle Guckian with an injury worry midway through the first half did little to halt Leitrim's gallop.

Keeper Michelle Monaghan made three good stops to deny Sligo goals that might have given Hugh Donnelly pause for thought had they gone in but with pace all the field, Leitrim never looked as if they were going to be caught.

Leitrim face Roscommon in the Connacht Final which is fixed for St Jarlath's Park in Tuam on Sunday May 15, at 2pm - the Rossies lost out by just six points to Clare last weekend and would relish another crack at Leitrim. With the groups for the TG4 All-Ireland competition decided by placings at provincial level, Leitrim have a lot of incentive to defend their title.

Sligo defied their previous form in the competition by going toe to toe with Leitrim in the early stages with Denise McGrath opening the scoring for the Yeatswomen with a free after just 40 seconds. Michelle Guckian hit back with a fine point but centre-back Nicola Brennan showed nice footwork to dodge the Leitrim defence for a point.

Leah Fox then swapped points with Sarah Cunney but Leitrim were starting to flex their muscles, Roisin McHugh point after Fox was denied a goal by a save from Sligo keeper Leonie Gaughan on six minutes.

Michelle Guckian put a free wide before Ballinamore’s Megan McGovern combined with clubmate Laura O’Dowd to score on ten minutes and a minute later, another Ballinamore player made a big contribution when Roisin McHugh fired to the Sligo net from close range.

Leah Fox hit a good point after a good move but Denise McGrath hit back for Sligo from a free. Leitrim were still in control with Guckian (free) and O’Dowd adding points before Aife Haran fired over an excellent score for the visitors.

However, the game was as good as over on 20 minutes when Michelle Guckian’s long range free evaded defenders and keeper to end up in the net, leaving Leitrim eight points clear. Guckian added a free with McGrath replying.

However, the gloss was taken off Leitrim’s march to victory when Michelle Guckian started to limp with an apparent hamstring injury while Siobhan McCartan was yellow carded for a late foul on Sligo’s Leah Duffy, McGrath converting the free.

Guckian did point after good work from Laura O’Dowd to leave Leitrim with a commanding 2-9 to 0-7 halftime lead.

Hugh Donnelly took the smart decision to remove Guckian from the action after the break with Siomha Quinn also going off as Sarah Reynolds & Bronagh O’Rourke entered the fray but it was Sligo’s Sarah Reynolds who opened the scoring with a fine point just two minutes into the second half.

Letirim hit back with points from O’Dowd and Niamh Tighe but Leitrim needed keeper Michelle Monaghan to be alert as she made a good save from a point blank effort after a McGrath free dropped short.

Leah Kelly point after good work for Sligo but the Years women were cursing their luck as Denise McGrath was denied a goal by smart Monaghan save. The Leitrim keeper would also deny Sarah Cunney a goal just as minute after Leah Fox converted from play.

McGrath put over a free but two from Fox extended Leitrim’s lead to ten points after 42 minutes of action. Leah Duffy pulled back a point for Sligo but Laura O’Dowd fired over shortly after.

Leitrim’s management must have been getting worried as Leah Fox suffered a knock and had to come off with McGrath pointing to leave nine between the teams. Sub Amy Fowley scored a good point before McGrath and Haran both added a point each to cut the gap back to eight points.

But that was as close as Sligo got as the lively Fowley, Elise Bruen and sub Shaylyn Ward all fired over points to complete a comfortable 11 point victory and seal Leitrim's place in the Connacht Final.