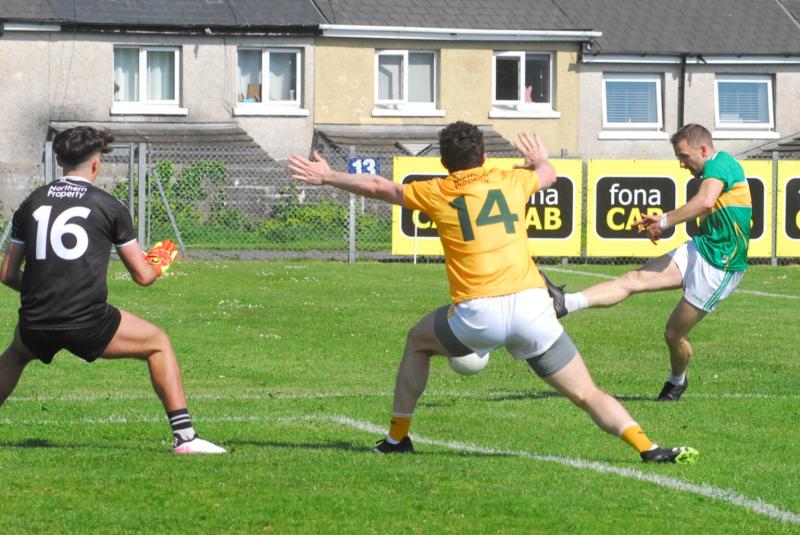 Action from the 2021 Allianz NFL meeting between Leitrim and Antrim as Evan Sweeney scores a goal in Corrigan Park Picture: Willie Donnellan

Leitrim will host Antrim in the first round of the inaugural Tailteann Cup on the weekend of May 28-29, after the draw was made on RTE Radio 1's Morning Ireland programme.

Andy Moran's side will be back in championship action in the new competition for Division 3 & 4 counties against the Ulster side who put up a battling show against Cavan in their first round before succumbing to a late barrage of Cavan scores on a 1-20 to 0-10 scoreline.

The counties last met in May 2021 in the final round of the Allianz NFL Division 4 North campaign in Corrigan Park in Belfast with Antrim winning a thrilling contest with an injury time point, 2-17 to 1-19 after leading by 11 points at one stage during the second half.

Other games in the Northern section of the draw see Longford host Fermanagh, Sligo take on London while favourites Cavan have a home game against a struggling Down.

In the Southern section, Wexford will host Offaly and Waterford travel to Wicklow in the preliminary round with the winners of both games facing off in the first round. Other first round games sees Carlow host Tipperary while there is a huge midlands derby with Laois taking on Westmeath.

The full Preliminary/Round 1 draw is as follows:

John Connolly witnessed another tough day for Leitrim's senior footballers against Galway, a sense of déjà vu dissipating the optimism that so many travelled to Pearse Stadium with
ADVERTISEMENT - CONTINUE READING BELOW