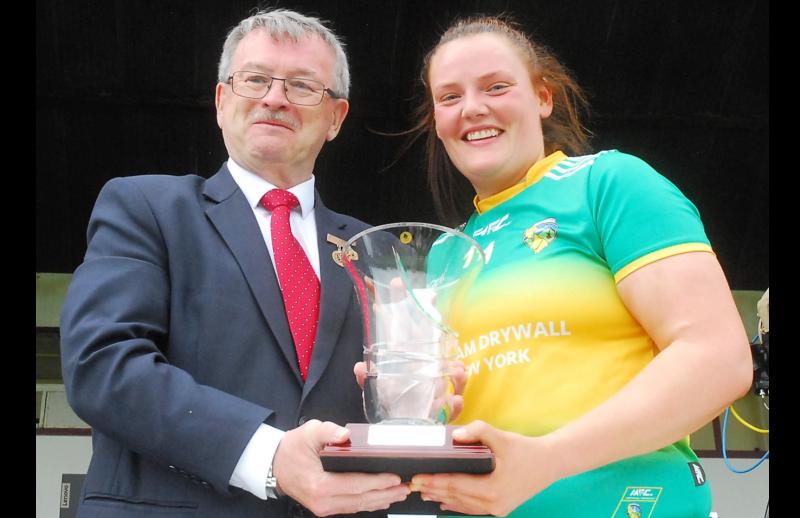 Michelle Guckian is presented with the Player of the Match award by Connacht LGFA President Con Moynihan Picture: Willie Donnellan

Nothing drives a team on more than having a point to prove and Player of the Match Michelle Guckian stressed that Leitrim Ladies had added motivation last Sunday when they overcame Roscommon to retain the TG4 Connacht LGFA Intermediate title.

“We knew it was going to be tough, Roscommon are the division 3 champions,” Michelle told the Observer as the Leitrim celebrations continued on around her before revealing some of the motivation that drove the team on last Sunday: “We didn’t finish the League the way we wanted to and we had a point to prove here in the Connacht Championship and today, we did it.

“We showed what Leitrim Ladies is about, how well we’ve improved and how good we actually are. Roscommon are such a strong team but I have to say our backs weathered the storm and kept them goalless. That was our aim today, keep them goal-less and we win the game.”

After winning back to back Player of the Match awards in Connacht Finals, Michelle downplayed her role in Leitrim’s success: “We were just at the end of the great passages of play and thankfully it worked out in the end. The backs you have to say were tremendous, there were some fabulous blocks back there.

“Michelle Monaghan in goals made some super, super saves - the kickouts didn’t go to plan at the start but she weathered that, got through it and got back on track and definitely had a super game.”

Looking back over the game, Michelle insisted that Leitrim never panicked despite enormous Roscommon pressure in the early stages of the final as they led by five points at one stage: “They got off to a good start, it was six points to one at one stage but we weathered the storm and we never felt that we were panicked and that we wouldn’t come back into the game.”

Leitrim’s top scorer also revealed that she and her teammates could feel the game’s balance shift in the second half: “You do feel the momentum shift when some of those scores go over the bar - you know you’re on the front foot, you know that you have them down. But it was tight up to the very end, two minutes to go, we were three points up, it didn’t matter, it was anybody’s game.”

Michelle paid tribute to Leitrim’s management team and insisted the County Ladies have their sights set on further glory: “We know the last three years that we’ve been building something good - Hugh, Brian, Richard, Martin, Damian, all the lads have put so much work into us.

“They’ve worked tirelessly, the stuff that goes on behind the scenes is absolutely incredible. The lads are here for a reason, to go all the way and that is what we’re going to do. Doesn’t matter if we don’t get there, we’re going to work as hard as we can to fight for it.”