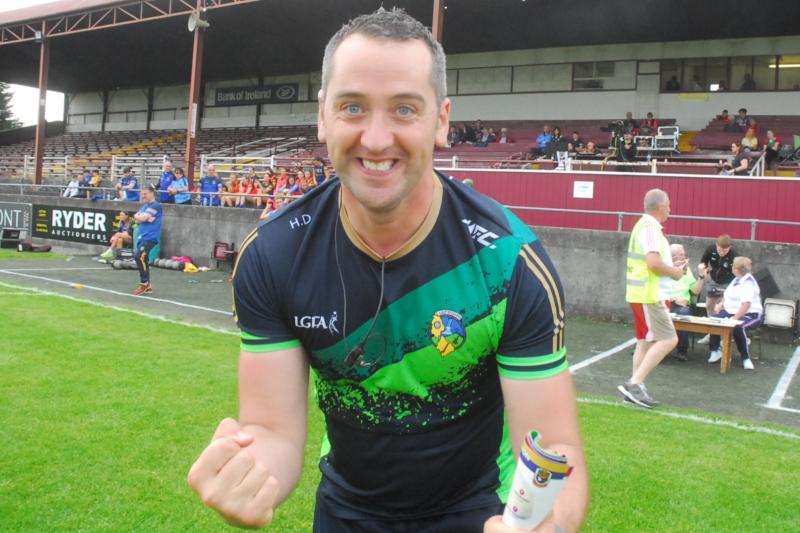 Leitrim ladies have “come of age” in terms of composure and character according to their manager Hugh Donnelly after his charges retained their TG4 Connacht LGFA Intermediate title last Sunday in Tuam.

A clearly delighted Donnelly paid fulsome tribute to the Leitrim players who withstood a grueling 60 minutes contest against Division 2 bound Roscommon, taking home the Gift of Life Cup for the second year in a row after a 1-14 to 0-14 victory.

Amidst the tumult and celebrations, the Observer found a quiet corner of St Jarlath’s Park to get Hugh’s reaction and typically, his first thoughts were for his players: “I’m just delighted for the girls - it is back to back titles and it means that last year wasn’t just a one off, we are still growing, still developing.”

What really pleased the Tyrone native was the composure and character Leitrim’s players displayed under enormous pressure from Roscommon - first when the Rossies started as if they were going to blow Leitrim out of the water and then in the second half to hold off a ferocious fightback from the Division 3 champions.

“We showed a massive amount of composure but what can I say, it was a great game of football, it ebbed and flowed. Probably for the first 10, 12, 15 minutes, we didn’t start that well - we were six to two down and we were fighting for our lives out there.

“But Leitrim being Leitrim, we have come of age these last few years in terms of composure and growing in stature and there are some great characters in that team who are able to problem solve on the pitch. We got ourselves into the game and the goal came at a vital time in the first half and because we didn’t play particularly well in the first 15 minutes, we knew we had a little bit more in the tank for the second half.”

Not taking anything away from the performance of Player of the Match Michelle Guckian, the Leitrim manager was keen to stress the importance of his entire squad in bringing the Gift of Life Cup back to Leitrim: “It was a massive team effort - sometimes forwards do get the kudos but the other 13 did a fantastic amount of work.

“That is not taking away from Michelle or Leah Fox or anybody else, we used 19 players there today and our keeper pulled off some fantastic saves today, our back six and midfielders worked extremely hard and they have to get the ball as far as Leah and Michelle and even the girls who came in, the amount of work they did off the ball, their movement was fantastic.”

As for the All-Ireland campaign, you sense Hugh can’t wait for the series to get started: “Today is a massive lift going into the All-Ireland and the Province winners cannot get relegated so we’re safe from that as well. We can now go out and express ourselves, not worry about relegation.”