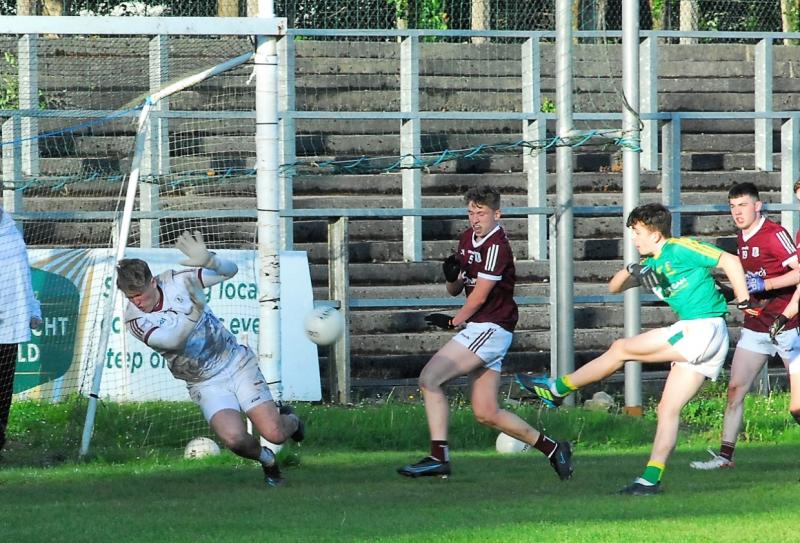 The signs have been there all throughout this Electric Ireland Connacht Minor Football Championship but Leitrim finally confirmed what we suspected when they deservedly and comprehensively beat Galway for their first victory over the Tribesmen at this championship grade since 1998 in Avant Money Pairc Sean Mac Diarmada on Friday evening.

Lowering Galway's colours at any level hasn't been a frequent occurrence for Leitrim footballers at any grade and Sunday's victory is only the second time Leitrim have beaten Galway since that famous year of 1998 when a team that featured future legends like John McKeon and Michael McGuinness stormed to the Connacht title.

A Leitrim team featuring Mark Plunkett, Conor Dolan, Ryan O'Rourke and Dean McGovern did defeat the Tribesmen back in 2014 in Tuam to win the Connacht Minor League title but this was just the second win over any county for Green & Gold in the past ten years in the Connacht Minor championship and it was celebrated mightily by players and fans when the final whistle sounded.

This was no smash and grab raid for Leitrim went toe to toe with the Galway men and were the better team - defensively, a new look back six gave up just one goal chance and looked very solid while the only blot on the Leitrim copybook was a failure to adequate reflect their superiority on the scoreboard.

Goals, so often the bane of this team this year, were the saviour as two in the space of a minute in the first half from Tom Plunkett and Fionn Curley put Leitrim in control against a highly rated Galway side. The Tribesmen recovered from a five point deficit to tie the scores as the game entered its final ten minutes.

It was then that the Mac Diarmada Gaels connection flourished with Paul Honeyman breaking free before setting up sub Naoise McManus for a cracking close range finish. That put Adrian Dockery's side three to the good with seven minutes to go but there was never any danger of Leitrim letting this one slip as Ben Guckian, Darren Shortt and Liam Chandler fired over great points to seal a famous victory.

It has looked before then that Leitrim might squander a glorious chance as they hit four wides in as many minutes midway through the second half as the teams were locked in a grim struggle for supremacy. But this Leitrim side is made of sterner stuff and kept testing the resolve of the Galway lads, eventually getting the breakthrough they deserved.

Unfortunately with Sligo defeating Roscommon, it means that Leitrim are consigned to a Connacht B Final against Roscommon with Galway meeting the Yeatsmen in the Connacht Semi-Final with Mayo awaiting the winner. 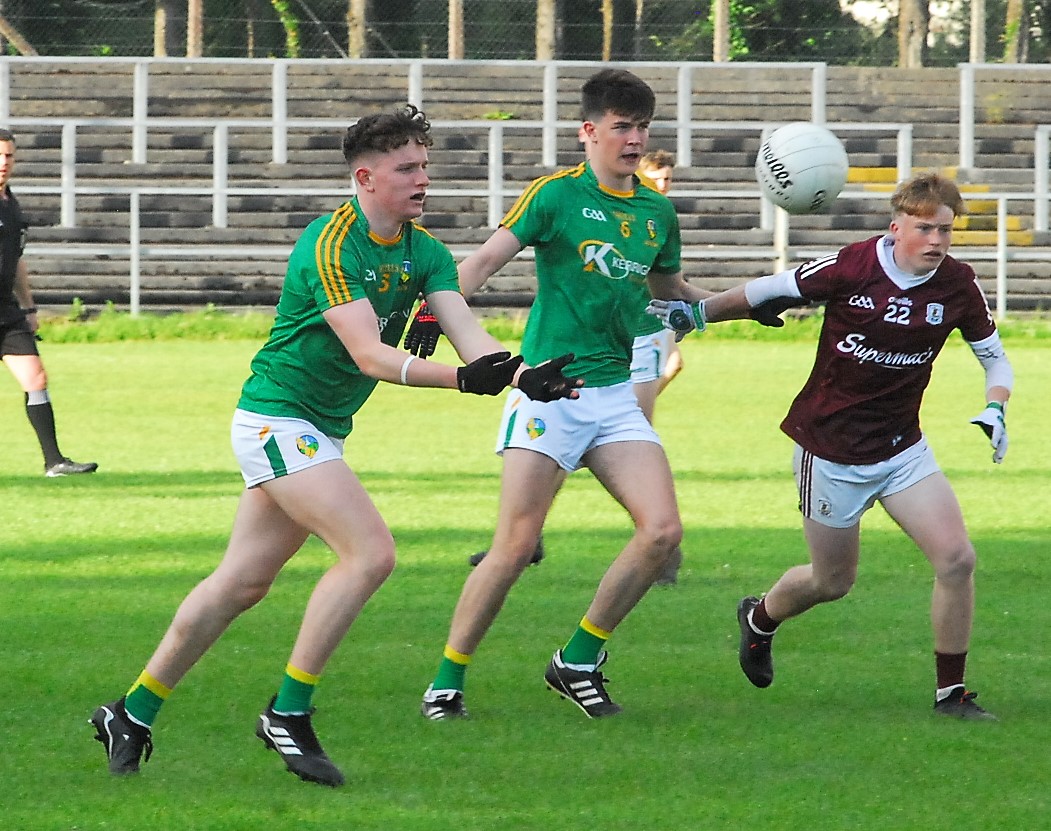 Leitrim thought they had got off to a perfect start when the ball was in the Galway net inside two minutes but the score was ruled out because nobody noticed the umpire signalling that the Galway keeper had stepped out the field of play when gathering a long shot.

Liam Chandler saw his effort into a strong wind fall just short and Galway showed what they are capable of with a swift attack from the kickout, Fionn O’Connor firing over. Chandler then put a huge 45 yard free over the bar on seven minutes but a superb Galway move led to another O’Connor point straight from the kickout.

Leitrim must have been cursing their luck when Darren Cox burst through the centre but saw Galway keeper Kyle Gilmore make a good save from his goal bound shot. The ball came back to Paul Honeyman who fired over but Leitrim continued to miss chances, Chandler putting a fifty wide while Honeyman had two bad misses from play and a free.

Ben Guckian soloed through to point on 17 minutes but Galway regained the lead when Colm Costello (free) and O’Connor pointed.

However, the game took a seismic shift when Tom Plunkett did well to get out to a hopeful ball along the wing. He turned his man and soloed in before unleashing a fabulous shot from a very tight angle to the Galway net.

Seconds later, Leitrim turned over the Galway kickout and this time Plunkett turned provider, handpassing the ball into the danger area when Fionn Curley managed to force the ball home from close range, despite Galway protests that Plunkett had carried the ball out of play.

In fairness, Galway responded well and two Costello points and a well worked Owen Morgan point left Leitrim leading 2-3 to 0-7 at the halftime break. Costello added another free awarded for an off-the-ball some 70 yards away from play but Ben Guckian fired over from long range after good work from Josh Maye. 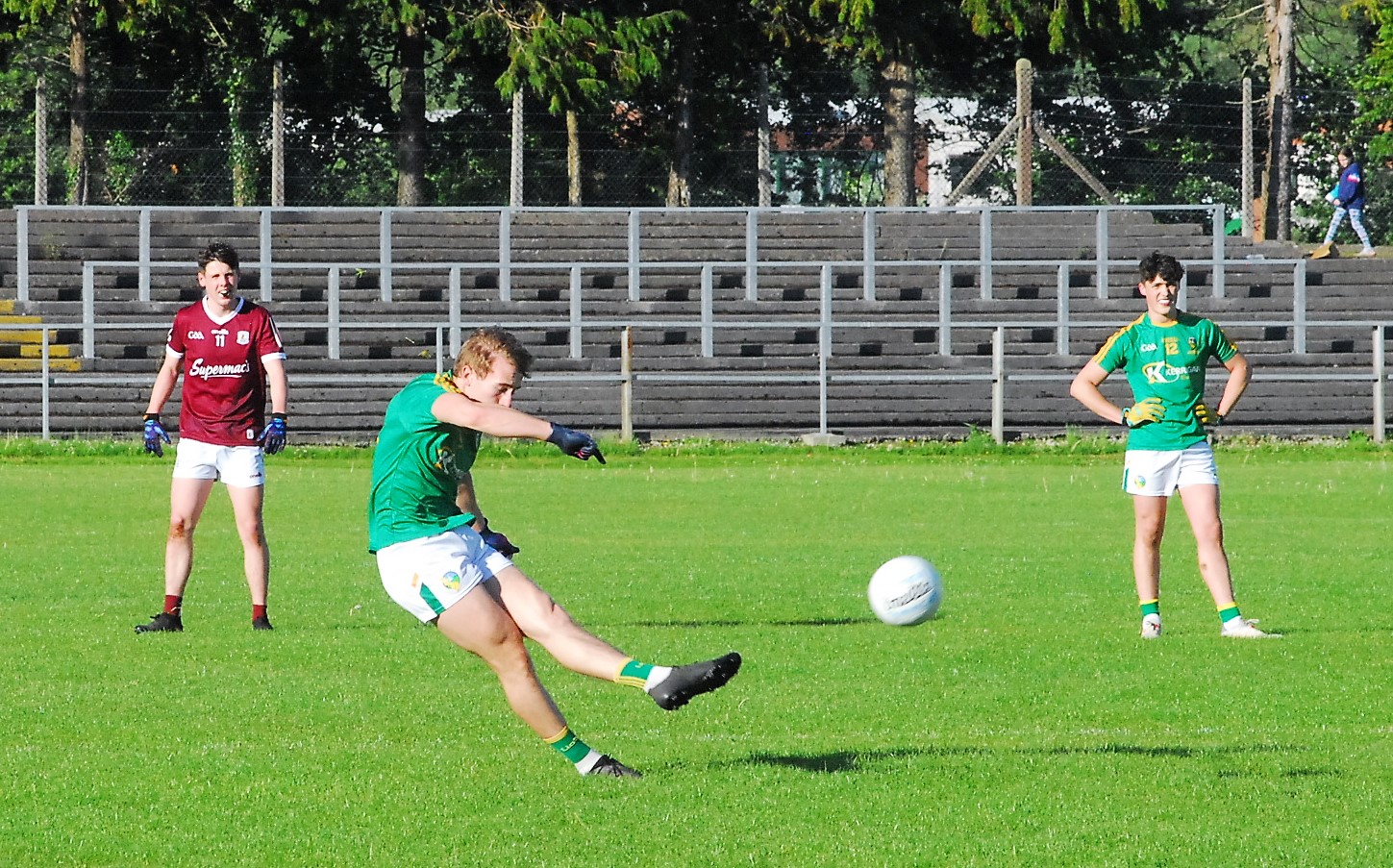 Liam Chandler fires a long range free at the Galway goal in the first half Picture: Willie Donnellan

But Galway were on top and two good points from Costello had the sides level six minutes into the second half while Leitrim’s goal had a scare, Shaun Sheridan saving well from O’Connor.

The tension was obviously getting to both teams with Guckian (free and play), Honeyman and Chandler shooting wide from good positions before a foul on Maye allowed Guckian to tap over a relatively easy free.

Galway came back with a Costello free, somewhat harshly awarded after it appeared the Tribesman slipped, but then the game changed when Darren Cox fed the ball to Honeyman in the corner. The Mac Diarmada Gaels man did extremely well to beat two or three defenders before finding sub Naoise McManus who belted the ball to the net.

Ben Guckian fired over a free but O’Connor answered with a free. Galway kept pushing for scores but they couldn’t work their way through a massed Leitrim defence and after Galway keeper Gilmore batted out a Guckian free, Darren Shortt pounced on the loose ball and fisted the ball over the bar.

The insurance score came as Leitrim broke up another attack over two minutes into added time and Liam Chandler fired over from distance to seal a famous, famous victory.