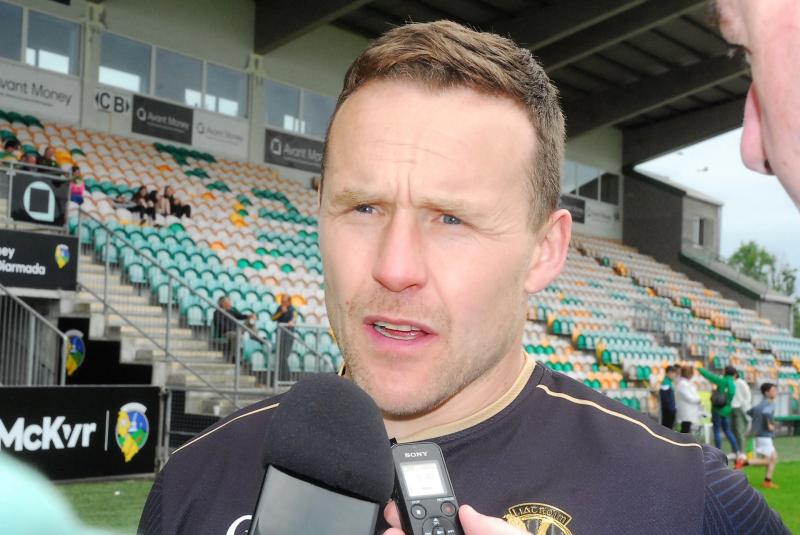 Defeat may have been Leitrim’s lot and it is hard to escape the feeling the Green & Gold were robbed a little bit last Sunday but the overriding feeling leaving Avant Money Pairc Sean Mac Diarmada was that the county footballers finally have the foundations in place to go places.

At least that is the analogy Andy Moran used when chatting with the media after Sunday’s dramatic Tailteann Cup Quarter-Final loss to Sligo on penalties after a pulsating encounter ended 2-16 to 1-19 after extra-time: “To me, of course, results dictate everything,” Andy said when asked about the future, “But you have to put the building blocks in place. Today, the foundation of the house is in, now it is time to go and build the house.”

The point the Leitrim manager was making came after he was asked to look back on Leitrim’s year as a whole and if the phrase “so near and yet so far” could sum up the Green & Gold’s year: “I don’t think it is too soon to ask. I talk to all ye guys right throughout the League and our first objective is to win a game.

“Sometimes we want to go from having no money to being a millionaire. Sometimes you have to do the building blocks, every good team has to do the blocks - Pat Gilroy just didn’t take over Dublin and they started winning All-Irelands, it took them two or three years to get there.

“With our boys, we hadn’t won a game, we probably weren’t in the shape to win a game. We go away, win our first game against Tipperary and then we lose, then we win three on the bounce! When was the last time Leitrim won three on the bounce? It was in 2019 so you need to give yourself time to build.”

Yet the former Footballer of the Year admitted that the defeat was hard to take even if pride was restored to the county’s footballing fans: “As a football team, you always want to win don’t you and at the start of the year, we wanted to win something. It is not going to happen in 2022.

“But the second part of that is to get a team the Leitrim people can be proud of and at the end of the that game, all through normal time and extra time, you can see a team that all of a sudden kids around Leitrim can follow.”

“Last year, we got four games in total - this year, we’ve played 11 games, won six, lost four and I don’t know if that today goes down as a draw or a loss. But it just shows the level these two teams can get at if they are allowed to play football.

Even the simple fact of training for a further month after the championship loss to Galway had benefits: “Who knew about Jordan Reynolds two weeks ago? Nobody knew about him but everybody knows about him now. Bagged 1-1 today, talked about him after the last game, a really good talent.

“Unfortunately Paul Keaney had a few injuries over the last couple of weeks but an extraordinary talent, Oisin McLoughlin is going to prove that hopefully. These guys have football in them and they need games to show it.

“Jordan has got two games there now, he wasn’t fit for most of the year, he gets fit, all of a sudden he is in, gets two games and he scores 1-2 in two games - what an introduction.”

Writing off the two meetings earlier this year, today was a game where both Leitrim and Sligo showed what they could produce: “Today was the game, the one in Markievicz was a dead rubber, the game in the dome was a good bit of craic but today was the game and I think it shows where the two teams are at. They didn’t have Murphy, we didn’t have Casey, there or thereabouts the best players on the teams so it levels it up. We didn’t have Ryan for long periods of it so it just shows where the team can get to.

“If you look at our Division 4 if you are on about barometers, if you had a bet on about it beforehand, it was Cavan number one, Tipp number two and then it was Sligo who finished with ten points, they were the next best so we need to chase them down. It is a pity for us that we still haven’t beaten them since 2011 so when we play them next year in the League, it puts a bit of extra spice in that doesn’t it.”