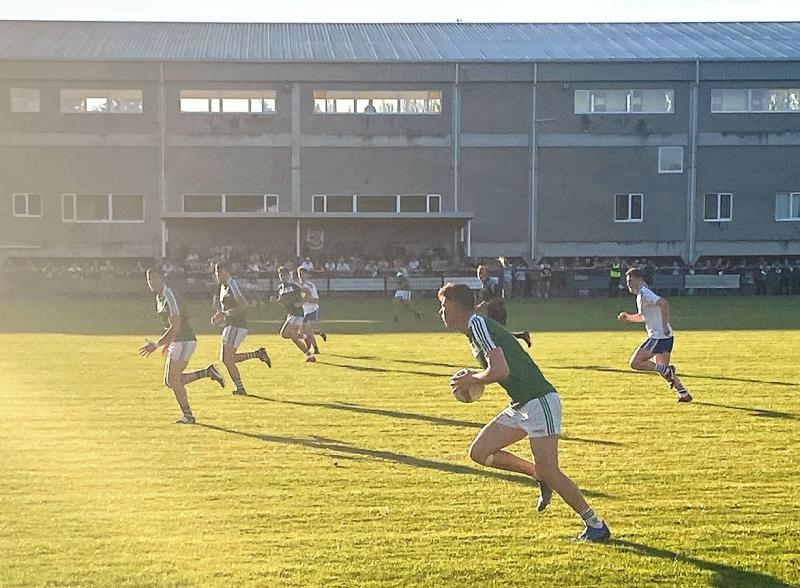 Just a week after a nervy one point win in the Division 1 Final, Mohill ruthlessly slammed the door shut on any notions that St Mary’s Kiltoghert might have that they were closing the gap as they cruised to a comfortable eight point victory in the Connacht Gold Leitrim SFC in Pairc Naomh Mhuire.

Whatever lessons there were in the League Final, Mohill obviously heeded them as they changed their style somewhat, running with the ball a bit more but there was little St Mary’s could do to stop them as the 2020 winners looked far more clinical in attack and more composed all around the field.

Strangely, you wouldn’t have said that Keith Beirne shot the lights out here as St Mary’s sought to marshal his influence but the Mohill man still shot nine points and produced a ridiculous pass to set up Ronan Gordon for the game’s only goal midway through the first half.

In general play, Beirne had to fight hard for his chances but when he got them, he reinforced the notion that there are few better strikers of the ball in Leitrim and when St Mary’s were penalised for slack defending, the Leitrim star fired over six frees on the night.

For St Mary’s, this was a frustrating evening - when they did play the ball quickly, Jack Casey and Oisin Bohan were able to win or when they did drive at the heart of the Mohill defence with pacy runs, they got scores. But too often, St Mary’s were caught playing the ball laterally or trying overly ambitious passes that a packed Mohill defence simply gobbled up.

With St Mary’s due to face one from Ballinamore Sean O’Heslins, Aughawillan, Gortletteragh or Leitrim Gaels in the next round, they will be looking for a major improvement in round 2. For Mohill, their opponents are one from Glencar Manorhamilton, Fenagh St Caillins, Melvin Gaels and Gortletteragh so they will be pretty happy with their afternoon’s work.

Mohill opened with two missed chances before Paul Keaney converted a free from the corner on three minutes. Two fine points from Ronan Gordon and Alan McLoughlin had Mohill in front but St Mary’s high back with another Keaney free on six minutes.

Two Beirne frees opened up a gap while James Mitchell’s block on Oisin Bohan’s shot started to tell us what way the game was heading. Jordan Reynolds quickly fired over after a Mohill attack broke down on 13 minutes and a minute later, he blasted another over the bar.

St Mary’s were creating chances but not taking them and they were made pay after a terrible Keaney 50 that went wide. From the kickout, Keith Keegan grabbed the ball and charged forward. An offload to Keith Beirne in the corner seemed to spell little danger but a fabulous sidefooted pass found Ronan Gordon unmarked in front of goal and he drilled the ball to the net.

Beirne get Mohill across the line

St Mary’s rallied briefly - James McGrail curled a huge shot from distance over the bar while Keaney added a free. Beirne and Keaney (free) swapped points, Beirne’s a superb effort from the corner.

The home side cut the gap back to a goal when Keaney got on the end of a good move started by McGrail to score while Oisin Bohan capped a length of the field move with a brilliant score from the corner.

However, two Beirne frees in the dying minutes of the half for silly fouls allowed Mohill to hold a 1-9 to 0-7 halftime lead.

Whether it was the heat or the halftime break, the scoring was slow to get going in the second half and it wasn’t until the tenth minute that Jordan Reynolds fired over. Beirne added another brilliant effort from out near the corner on 15 minutes and you sensed the game was as good as over.

St Mary’s did have a flurry with points from Jack Casey and Paul Keaney in the space of a minute but they were never able to threaten the Mohill goal and the match petered out, Beirne fired over three more points while Oisin Madden was unlucky not to find the net in injury time, his shot scuffing the outside of the post.