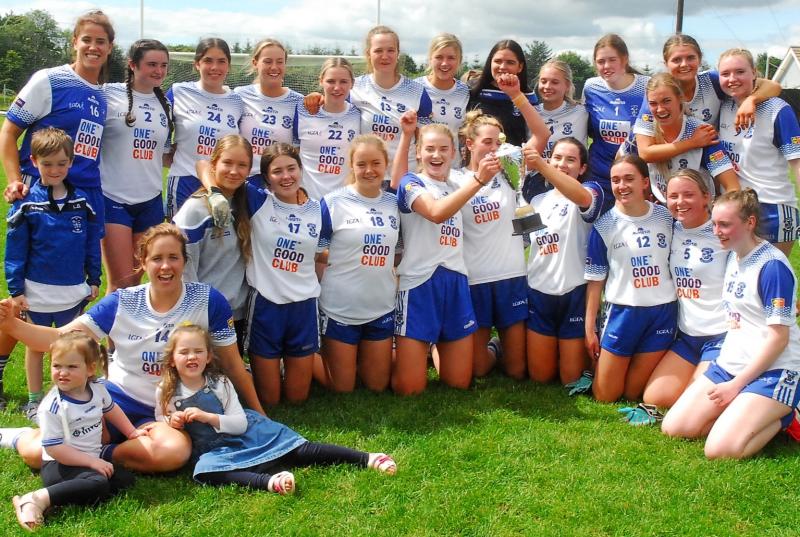 It is the time of year when the possibilities are endless, when dreams are attainable and the chance to make history is at your fingertips. Yes, the club championship is about to start and the anticipation is building.

True, the competition  is starting about two weeks later than normal but the one thing you can’t deny is the tingle of excitement in the air. Sometimes that excitement is dulled by the presence of an overwhelming power but right now, you get the sense that quite a few teams believe they can knock off the champions.

That’s probably due more to Ballinamore Sean O’Heslins status as first time champions - yes, yes, I know they are the record title holders but for this crop of new Ceannabo legends, they truly are first time winners as they ended a 31 year famine to lift the Fenagh Cup back last October.

Will that victory liberate them and herald a new dynasty in the manner Glencar Manorhamilton took over back in 2008 or will it be a single moment in time in the way it was for Annaduff, Kiltubrid, Aughavas and Melvin Gaels over the last 20 plus years?

That’s really up to the Gods but gut feeling, Sean O’Heslins’ history demands championship success and there is a burning desire lurking within the Ballinamore men not to settle for what they have. With their age profile and depth of talent, all that is needed is motivation …. and luck!

Every single team that has won the Fenagh Cup has enjoyed a slice of luck at some stage and whoever is celebrating on October 16, all we can be sure of is that at some point, lady luck shone on their challenge.

Most times, luck comes in the form of bad luck - a crippling injury, a missed shot or mistimed challenge and dreams turn to dust but that’s the nature of the game and I’m  often reminded of the phrase “winners make their own luck” - that they do.

The challengers are lining up to wrestle the Fenagh Cup from Ballinamore Sean O’Heslins but I won’t blather the usual nonsense that everyone has an equal chance of glory. For some, glory will come in making the playoffs, for others it will be avoiding relegation but not all teams are created equal - that’s just a fact of life.

There are four, maybe five, stand out challengers   but most fans I’ve talked to over the past few months can’t see beyond Ballinamore and Mohill. Hard not to agree but I’ve noticed a lengthening of those odds in recent weeks and it will be interesting to see what teams make a leap over the next three months.

St Mary’s did it two years ago after losing their first two games to reach the Final  while their fellow parishioners Leitrim Gaels made a big step forward last year and now they must back it up and  push on - that will be one of the subplots of the year. But the team with the tradition, the inner belief, that allows them to make huge leaps is Aughawillan. Are they as strong as they once were? Probably not but the core group, the talent and fire that is in that group, means you can never discount them.

What is also a step into the unknown is the new format - the added mystery of week on week draws has energised  fans. The new format with just six teams qualifying to the knockout stages is to be welcomed - eight teams out of ten qualifying didn’t ask much of a club to make the quarter-finals - now those who make it will have to work at it.

Conversely, the team who misses out on sixth gets dragged into a relegation series - that’s rough, particularly as qualifying for the quarter-finals may come down to scoring difference and that really depends on the luck of the draw! The new system, while exciting and refreshing, could see one of the minnows drawn against one of the superpowers in all four games and  with that goes your chances.

And depending on how the draw is conducted, the open draw is really only open for the first round. If the teams lucky enough to be drawn at home this weekend are automatically away in the second round, that means instead of nine possible opponents, it is really only five - the teams who played away.

It gets more complicated for the third round draw - eight possible opponents and if the home and away aspect is maintained, it could mean only two or three possible match-ups in the final round.

No system is perfect - the reaction among Mohill and St Mary’s fans to be drawn against each other just six days after meeting in the League Final wasn’t one of joy but that's one of the quirks of the system and it is a welcome effort to bring new life to the group stages which had grown somewhat stale.

If I’m being honest, I’d have gone full nuclear - eight teams in senior and intermediate and whatever remaining first teams in the Junior grade. That would mean a shorter championship and less games but it would also allow more times between games which would aid performance rather than simply a test of endurance and strength in depth.

Right now, the better resourced clubs have an immediate advantage with so many games in such a short space of time  - every club will get hit with injury but if you’re struggling for numbers, five games (with the playoffs/relegation series) in six weeks is a tough ask.

But that’s just a personal preference and who knows what we'll be talking about in four weeks time, let alone eight or 12. After all, last year’s Senior championship was vastly underwhelming right up until the Mohill and Leitrim Gaels semi-final and that wonderful, exhilarating decider.

Some think it is written in the stars but all we can do is make an educated guess. Right now, I’m leaning towards Ballinamore Sean O’Heslins retaining their title, they are motivated and missing out on the League Final could be the spark for the defence of their title. But all I really know right now is that I don't know, so all I can do is say good luck to everyone and roll on the championship!