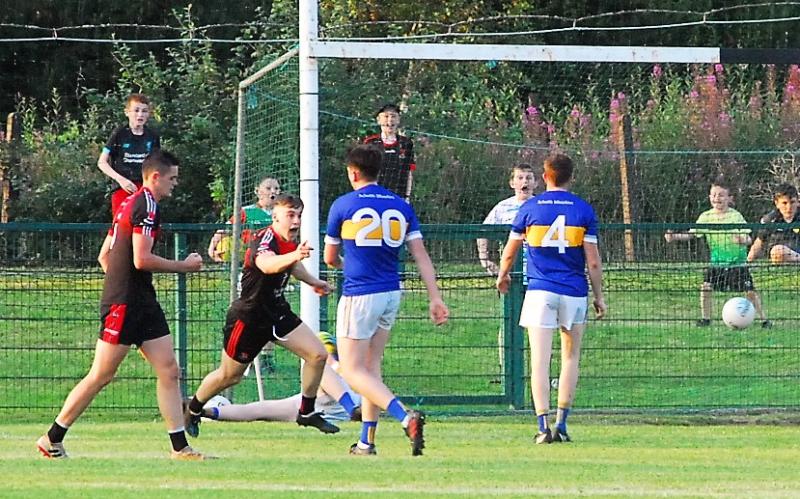 Defending champions Ballinamore Sean O'Heslins and Fenagh St Caillins delivered big statements of intent on Saturday evening in the first round of the Connacht Gold Leitrim Senior Championship while Gortletteragh scored a narrow one point victory with huge implications over Melvin Gaels in Kinlough.

Ballinamore Sean O'Heslins enjoyed a comfortable start to their defence of the Fenagh Cup when they proved too strong for last year's Intermediate winners St Patrick's Dromahair in St Osnat's GAA grounds in Glencar. In the battle of last year's champions, O'Heslins had three points on the board before Martin Feeney opened the home team's account 13 minutes into the contest.

The champions would add six more points before halftime with  Dillon Beirne, Shane & Paul Moran, Mark McGrory, Wayne McKeon, Michael McKiernan and Niall McGovern all on target with Feeney joined by Jamie Conlon on the scoresheet as Ballinamore led 0-9 to 0-2 at the break.

Dromahair made a surge early in the second half with four points from Feeney with Niall McGovern and Paul Moran on target for the visitors but then last year's Senior winners took over with an unanswered blast of 1-4 in a seven minute spell, the goal coming from Paul Moran.

That killed off whatever hope Dromahair had left as Ballinamore opened the defence of their crown with a 1-19 to 0-8 victory.

In Fenagh, the hosts scored an impressive 3-16 to 0-13 victory over Aughawillan in a game much closer than the scoreline suggests. Fenagh made the running for much of this game with an early goal from Ryan O'Rourke, back after missing last week's Division 2 Final, ensuring Fenagh St Caillins led 1-8 to 0-9 at the halftime break.

Aughawillan created a host of chances in the second half but kicked a succession of costly wides while they cracked two shots off the woodwork. It meant that Fenagh, with Ryan & Riordan O'Rourke always an effective outlet, were able to hold them at arm's length for the second half.

The game turned in a flash with less than six minutes to go - a block on a goal bound Aughawillan effort stopped the visitors from drawing level and as Fenagh broke upfield, Ryan O'Rourke's long pass was caught by Conor Dwyer who fed Oisin McLoughlin. The Fenagh then produced one of those wonderful small jinxing solos that wrong footed the defence allowing McLoughlin to hammer home the killer score.

From there to the finish, Fenagh ran riot although Aughawillan sub Reece Maher cracked a shot off the Fenagh crossbar and it was Riordan O'Rourke who wrapped up a 3-16 to 0-13 victory with a goal in added time.

The final game of the Senior Championship saw Gortletteragh makes the longest journey in Leitrim club football a very profitable one as they scored a huge 1-10 to 0-12 victory over Melvin Gaels in Kinlough. Gortletteragh struck for the vital goal 11 minutes into the game when Keoghan McGovern found the net.

Points from Oisin Niblock, Tom Crowe, James Campbell and Evan Ward ensured a 1-5 to 0-4 halftime lead for the visitors with Matthew Cleary, Caolan Clancy and Declan Clancy on target for the Gaels. Four quick points early in the second half saw the teams level with Jamie Quinn edging Gortletteragh back in front while the Gaels' chances took a blow with a black card for Peter McGowan.

Philip McGowan tied the scores once more but a red card for Cathal McSharry and points from Jamie Quinn (3) and Francis Flynn put Gortletteragh in the driving seat. However, Melvin Gaels staged a furious late rally with points from Declan Clancy, Peter Connolly and Jesse McGuinness cut the gap to just a point.

Time ran out on the home side who ended up with 13 men after county star Cillian McGloin received two yellow cards in the final minutes with Gortletteragh hanging on for victory.

In the Smith Monumentals Intermediate championship, Annaduff put their relegation from Division 1 behind them in emphatic fashion as they scored a 4-12 to 0-11 victory over Drumreilly at home. Drumreilly had four points on the board before Annaduff opened their account but a goal from Daniel Bosquette ensured they led 1-5 to 0-5 at the interval.

Two goals from Jason Ward and another from Sean Duignan ensured a comfortable victory for Annaduff in the opening game of the Intermediate grade.